Your Voice, Your Choice program to spend 2021 catching up

For a second year in a row, the Your Voice, Your Choice participatory budgeting program that awards funds for small street and park improvement projects will not be conducting any process to fund new projects in 2021. Last week the Department of Neighborhoods, which administers the program, announced that instead the Your Voice Your Choice team will be focusing on “ensuring that we keep our promise to the community by channeling all remaining funds to Seattle Department of Transportation and Seattle Parks and Recreation to implement previously awarded projects, particularly those in our most vulnerable communities (Equity & Environment Initiative Focus Areas)”.

The Your Voice Your Choice program is one of the only avenues that exist to allow community suggestions on improvements to make streets safer or parks more accessible, in the case of streets, outside the normal SDOT prioritization process.

According to Shaquan Smith, Participatory Budget Advisor at the Department of Neighborhoods, the backlog primarily consists of 22 projects that were originally selected by community in 2019. We do know of some 2018 projects that are left to be completed, though. For example, a new crosswalk being added at 14th Ave E and E Aloha Street near Volunteer Park required coordination with Seattle City Light in 2020 and is still not in place. 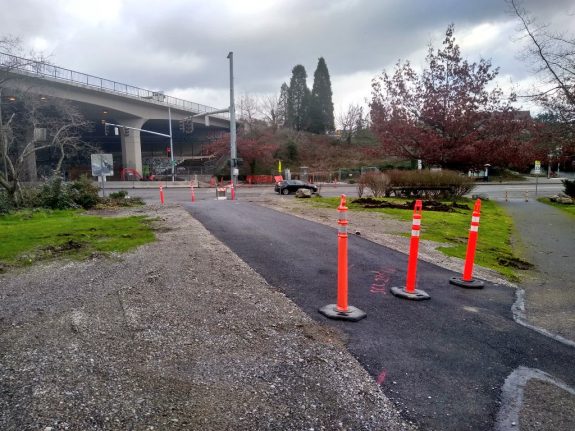 Per Smith, “​Due to COVID, the original $2 million that was meant to go towards the 22 awarded projects in 2019 was cut in half”, hence the city is having to use the 2021 Your Voice Your Choice budget to complete the existing backlog. Smith also cited unforeseen design and construction issues, coordination with other projects, departments, and/or agencies, and delays related to crew bandwidth which increases the costs of labor and materials as contributing to delay.

We are seeing projects get completed around the city, like the curb extensions recently installed in Queen Anne at the crosswalk at Taylor Ave N and Galer Street, tweeted by Lee Pyne-Mercier:

Seattle DOT narrowing crossing to improve pedestrian safety at Taylor Ave N and Galer St in Queen Anne. There are many accidents around this curve. Thanks @dongho_chang pic.twitter.com/HmPAQ9ttxM

You can check the Your Voice Your Choice implementation page to see which projects in your neighborhood are in the backlog.

“​If there are no other delays, the goal is to complete most of the backlogged projects by the end of 2021 with very few being carried over to 2022. This will allow the program to be able to restart an official new cycle of new projects that year,” Smith said.

In 2018, the program was criticized for not including a broad enough array of voices in the project selection and voting stages. In 2019, more than 6,500 people voted on projects, or less than 1% of the city’s population, after attempts to broaden participation were made, including adding more paper ballots at Seattle Public Library branches. In 2019, they also allocated an extra amount of money to be available in the City’s “Equity and Environment Initiative Focus Areas”, where they would benefit underserved populations.

The Department of Neighborhoods now says they will be spending 2021 “restructuring the YVYC program to better meet the immediate needs of Black, Indigenous and people of color (BIPOC) communities who have been most impacted by COVID-19″.

2021 is also the year that SDOT will be completing the Neighborhood Street Fund projects, which are fewer in number and larger in scope, and which you can read about here.