This is a guest post written by Liam Bradshaw. Liam is a research scientist in materials chemistry who lives near 35th Ave NE in Wedgwood. He enjoys riding for both commuting and recreation, but drives, walks, and busses when necessary.

35th Ave NE runs through the heart of the Wedgwood and Bryant neighborhoods, connecting our schools, post office, grocery stores, and restaurants. It currently has an outdated design that is causing injuries and collisions at an alarming rate, and SDOT’s repaving this spring provides the perfect opportunity to address the safety problems as the community has been requesting for years.

The design has been finalized and bids returned for construction, but a few vocal neighbors are petitioning the mayor to halt the project and remove the bike lanes that are included to improve the safety of all who use the street. We need your voice on a petition to make sure this project happens. 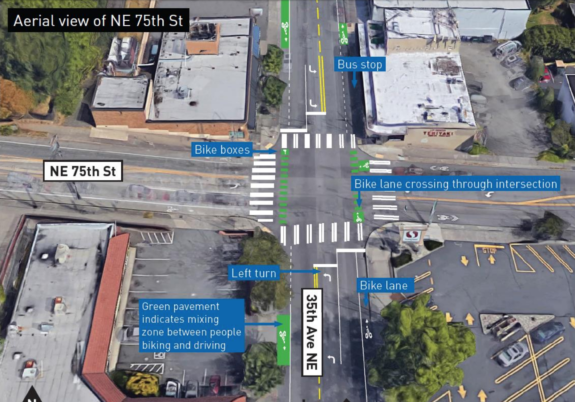 Proposed layout of the intersection of 35th ave NE and NE 75th St. From the SDOT project page.

The current state of 35th is so dangerous mostly because of wide lanes and ambiguity. This causes a serious collision about once every two weeks, with at least 198 people injured in the 2.3 mile project boundary since 2004. Predictably, speeding is rampant where lanes are 12 feet or wider, and (south of NE 77th St) timed parking increases that width at rush hour without making a second lane, encouraging dangerous merges and passing on the right. 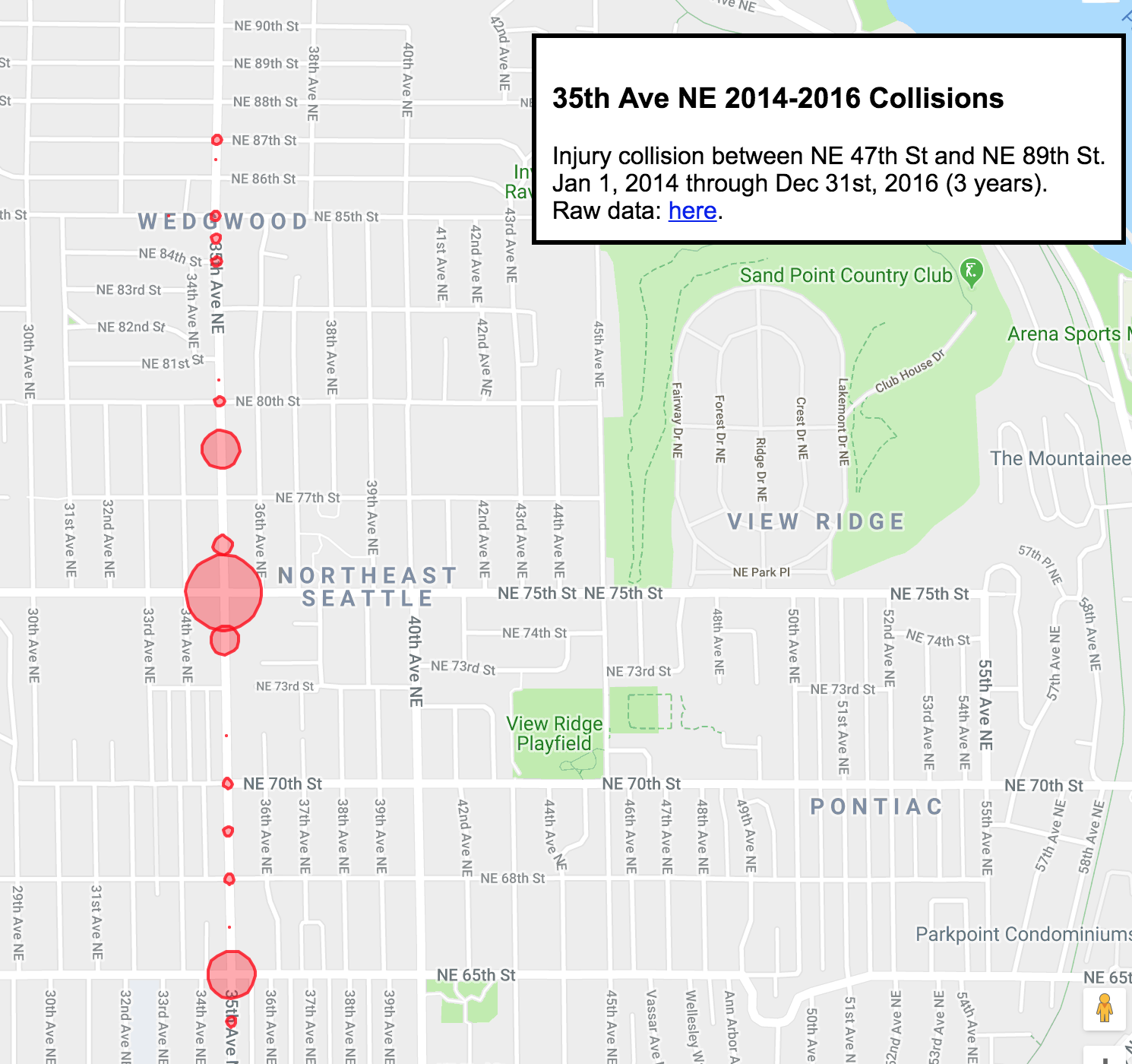 The community has been demanding a fix for years. Improving walkability was the primary demand to the “Future 35th Ave NE Plan” developed between 2012 and 2015. When SDOT started outreach for the repaving in 2016, they used this plan along with their own survey showing 88% of people wanted to be able to walk and 48% wanted to have a safe place to bike. This street is also a part of the “citywide network” on the 2014 Bike Master Plan, which calls for protected bike lanes north of NE 68th St. 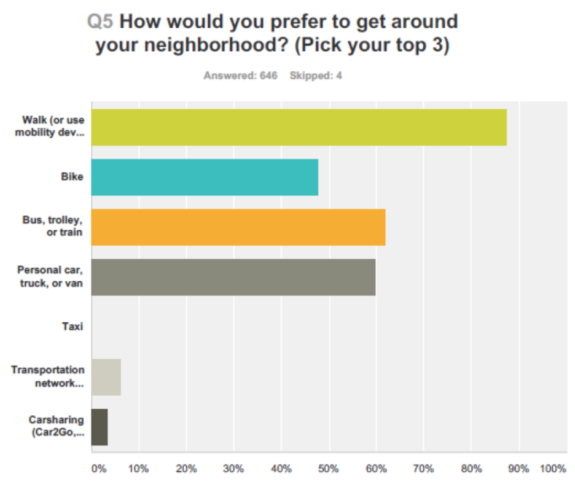 Almost 50% of respondents to SDOT’s survey said they would like to get around this neighborhood by bike.

SDOT therefore developed the plan below, which pulls elements from similar projects around Seattle and nation-wide that have been resoundingly successful at reducing speeding and providing a safer, more comfortable sidewalk, while maintaining (or improving) the flow of cars and busses. The key components of this design are to keep car lanes between 10 and 11 feet (so people don’t feel like they’re on the freeway), while using bike lanes to take up the extra space and create a buffer between the sidewalk and cars. 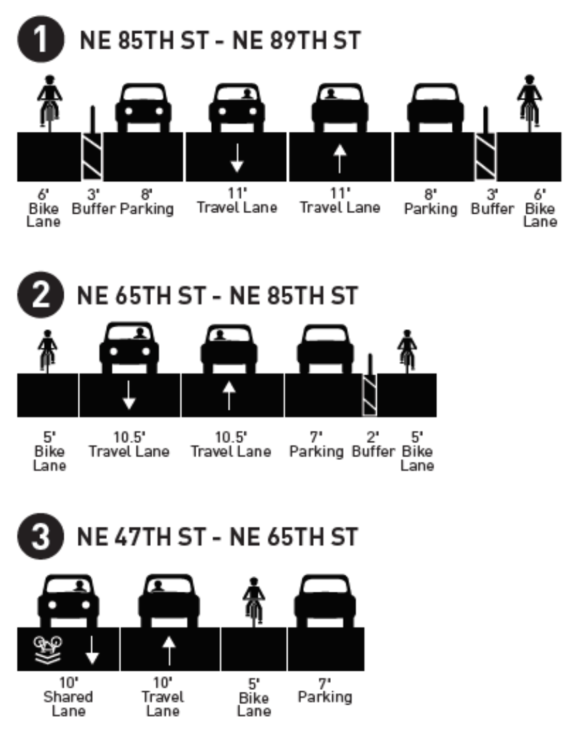 The plan maintains the current single lane in each direction along with parking on the east side of the street (but removes its time restrictions). With an abundance of off-street lots, street parking was found never exceed 50% occupancy within one block of 35th. Left turn pockets will be added to make the major intersections safer and more efficient. Bike lanes provide a buffer to the sidewalk and provide space for people on bikes with a mix of paint-only and protected bike lanes. It would be great to see higher quality bicycle infrastructure, but this represents the compromise reached after years of debate. SDOT’s proven modeling predicts no more than a 30-90 second delay at peak rush hour, and the reduction in collisions will no doubt make traffic more predictable.

After the near-final design was presented in October, a few angry neighbors started a petition to halt the project and strip the bike lane component, putting the badly needed safety improvements at risk. To this end they have spread misinformation and fear, claiming the project will cause gridlock, speeding on side-streets, and will impede emergency vehicles. It’s worth noting that these opponents of the project also want a safe, calm street, but they appear so distrustful of SDOT’s modeling and promises of follow-up studies, and so viscerally opposed to the idea of removing any parking to put bike lanes on arterials, that they ask to sacrifice all of the safety and economic benefits bike lanes like these bring to all users of the road. 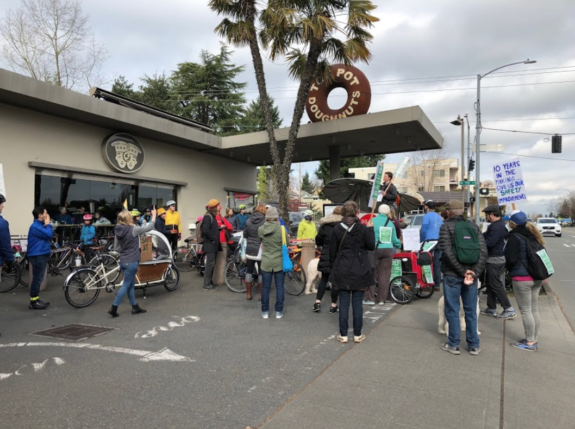 Angry that these people claimed to represent the voice of the whole neighborhood, proponents of safe streets hastily formed the “Safe 35th group,” and a petition to support the project. We have been able to gather over 500 signatures in two weeks alone, but we need your voice to show our new Mayor that the city needs to prioritize safety on the streets that are the lifeblood of our communities. And we need your help ASAP: the city will sign the contract for construction any day.

Although the petition focuses on 35th Ave NE, the implications citywide aren’t lost on us. The city has made commitments to building a connected bike network and to reducing traffic injuries. Bike lanes are a crucial tool that traffic engineers use to make streets safer for the multiple modes of travel that we all use, and SDOT must do everything in its power to deliver on its Vision Zero promise. If the bike lanes are stripped from this project, what does that mean for the next project, and the next after that?

If you have an extra minute, please also take the time to email [email protected] that you support projects with bike lanes like this one. These emails really make a difference.

To learn more about the details of this project and ways that it will make 35th ave NE a livable street and vibrant community hub, please read Councilmember Rob Johnson’s article in support of the project, or visit safe35th.blogspot.com.