Pate: My experience riding Obliteride as a cancer survivor

Editor’s Note: Leigh Pate is a writer and photographer in Seattle who has biked across the US and through India. She reached out to Seattle Bike Blog offering to write about her experience biking in Obliteride as she continues healing from a battle with cancer. You can donate to her Obliteride fundraising campaign here. 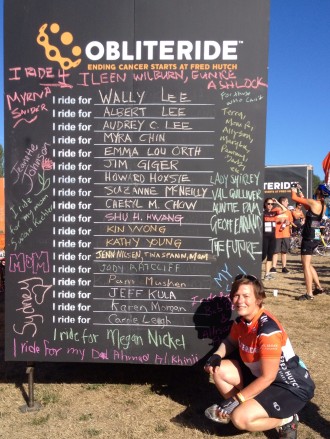 “What kind of cancer did you have?”

I slow down and drop back alongside an older man sitting very upright on sturdy bike with a rack and two big mirrors jutting out the side of his handlebars.

“Breast cancer,” I answer. “Did you have cancer, too?”

“Lymphoma,” he answers. “Just finished radiation a year ago.”

We are riding the 50-mile route of Obliteride, a bike ride to raise money for Fred Hutchinson Cancer Research Center.

We ride and chat. He explains that the large side mirrors allow him to ride after he fractured his neck and his neck was fused. The mirrors help him see because he can’t turn his head. He laments that the route is a little easier than he was hoping for. Maybe next year he’ll sign up for the century for a little more challenge.

We talk about how coming back from cancer means learning how to do what you love with a whole new body. And we laugh at the once unthinkable accommodations we learned to make so we can do what we love. For him, big side mirrors. For me, special garments to manage side effects from surgery.

Obliteride raises money for the Fred Hutchinson Cancer Research Center. At a time when government research funding has been cut and research has become more expensive, leading cancer research centers like the Hutch are turning to their patients and their community to fill the gap and keep innovative, outside-the-box research funded.

In its second year, this ride is well-supported and well-organized, with routes suitable for many skill levels. Pace-lining teams raced through the century or the two-day route while occasional riders huffed up hills on borrowed bikes, attempting their longest ride ever to shouts of encouragement.

From the Tom Douglas salmon dinner and live music kicking off the event at Gasworks to the volunteer who handed me a delicious ice-cold mint lemonade as I waited in line at a rest stop, riders were treated well and showered with appreciation for their efforts. Over 900 riders have raised well more than one million so far, and fundraising is not over yet. Their goal is to raise more than $2 million, so don’t stop donating yet.

Obliteride has its share of cancer survivors finding ways to do remarkable things after cancer. But it succeeds because of the riders and volunteers and donors who contribute their pedal-power, time and money.

I rode with a woman from Davis, Calif., who found solace riding through our beautiful city on behalf of her brother from Bellevue who just spent six weeks gravely ill in the hospital. I met a young researcher at the Hutch whose face lit up when she explained how her work will help cancer patients live better and longer as more people are surviving. I shared a table at the kick-off dinner with a man who chose to ride Obliteride on his year off from Ironman events because he wanted to ride the beautiful two-day route and just contribute to a good cause.

And I met a couple from Dallas who flew in to volunteer and staffed the rest stop on Mercer Island. They had lost a daughter to cancer, and “Team Sandy” included their entire family riding to raise money and – I suspect – turn their family tragedy into something that could benefit others.

All of us rode or volunteered or donated because we understand that better and faster cancer research though leading research centers like the Hutch will save lives. But many of us rode for much more personal causes.

I signed-up to ride less than a week before the event. Before diagnosis I biked across the US, spent two months biking through India, and raced triathlons. Now, two years after treatment ended, I chose to ride the 50-mile route because I knew I could do that distance safely.

I was treated for breast cancer at the Seattle Cancer Care Alliance — the hospital arm of Fred Hutch — and have benefitted from the high-quality physicians who are drawn to practice there. But what really pushed me to ride was watching a friend die from breast cancer last year. Just two weeks ago another friend who survived her breast cancer was diagnosed with a second, completely unrelated life-threatening cancer, and Fred Hutchinson Cancer Research Center is leading the way in finding better treatment for her rare T-cell lymphoma.

And so I joined the hundreds of cyclists and volunteers who came to Obliteride to make something good come from grief and sickness.

But as I rode from the start line through crowds of cheering supporters. Past the signs with the names of survivors placed along the route. As I rode past orange-clad volunteers who cheered along the route and shouted encouragement. And as I met so many other riders who all have their own story, I realized that this ride wasn’t just about raising money for cancer research. This ride is part of the long journey from recovering from cancer treatment, or losing a loved one, or watching a friend struggle … to truly healing.

So thank you. To everyone who rode. To everyone who volunteered and cheered, and handed out cold drinks and rang the cowbells. To everyone who donated to sponsor a rider, or contributed to make this a great event. To other survivors who figured out how to ride and take their life back after treatment. And mostly, thanks to all the family and friends who supported us – through treatment and by contributing – as we ride to heal.
Because while one bike ride won’t stop cancer, a united community focused on finding cures just might. 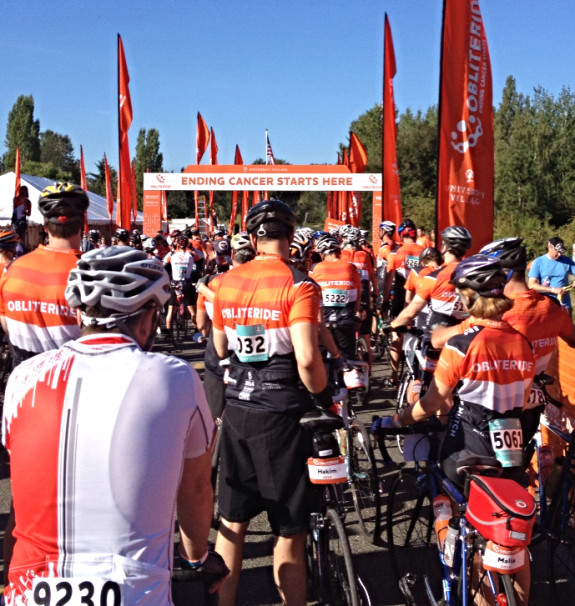 Read more by Leigh at her website: http://www.LeighPate.com
View all posts by Leigh Pate →
This entry was posted in news and tagged fred hutchinson, leigh pate, obliteride 2014. Bookmark the permalink.

4 Responses to Pate: My experience riding Obliteride as a cancer survivor