Blake Trask: End days in Olympia – What’s at stake for biking and walking? A lot.

Editor’s Note: Blake has been in Olympia all session working with the legislature to make the state safer and more accessible for people on bikes. In this guest post, he makes the case for why urgent action is needed to make sure vital funding for biking and walking projects secures its rightful place in the state’s transportation bill. 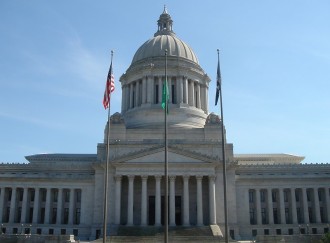 In Seattle, where excitement is growing for the Seattle Bicycle Master Plan Update’s completion, one sobering fact remains: Funding remains short to get much done in growing a world-class network of bikeways.

In Olympia, as tensions rise in the waning days of the Washington State Legislature’s special session, critical investments are still in play that promise to jump start Seattle’s Bicycle Master Plan Update and simultaneously build hundreds of non-motorized safety and mobility projects statewide.

With all this promise and opportunity for bicycling in Seattle and statewide, we need your voice by this weekend to make it a reality (see below for instructions how).

The Bicycle Alliance of Washington – along with our partners on the Transportation for Washington campaign – need your help to remind your state legislators that walking and biking investments (as well as transit investments) create safer streets for our kids, expand our transportation freedom, and save money for taxpayers statewide.

While the current state transportation revenue package has sparked considerable debate – in no small part because it could use additional investments to fix our aging roads and bridges – we’ve negotiated to get over $370 million of investments that could touch hundreds of walking and biking, livable streets, and school safety projects.

It’s more for walking and biking than any previous state transportation package and offers us a rare opportunity to make streets safer for our kids, improve cycling opportunities on trails and in cities, grow business, and create jobs statewide.

Additional projects across the region and state will include completion of Anacortes’s Guemes Channel Trail, completing a missing link of the Mountains to Sound Trail in Bellevue, additions to the Centennial Trail in Snohomish County, revenue for Cross Kirkland Corridor, extending the Appleway Shared Use Path in Spokane Valley, as well as investments in the Lake to Bay Trail connecting Des Moines to Renton.

In addition to these upfront projects, over the course of the proposed 12-year package Safe Routes to School grant program will see $60 million in grants, and cities with Complete Streets ordinances will be eligible for $100 million in competitive grants. Additionally, safety grants for biking and walking for $99 million would be made. These investments will help local governments statewide meet the ever-growing need for residents and visitors who want to bike and walk more.

Let’s get it done

We can’t thank everyone enough for your letters and calls to pass the Bicycle Alliance’s signature legislation, the Neighborhood Safe Streets Bill. Your calls and emails can again make a difference in securing investments for biking today and into the future.

What can you do? Contact your legislators with one simple message: I support a statewide transportation revenue package if and only if it includes the investments in Safe Routes to School, walking and biking safety, and Complete Streets currently included in Representative Clibborn’s proposal, and especially those investments included in the Liias Amendment.

Blake Trask is the state policy director at the Bicycle Alliance of Washington – Washington’s statewide bicycle advocacy and education organization that works to grow bicycling statewide. www.bicyclealliance.org
View all posts by Blake Trask →
This entry was posted in news and tagged 2013 legislature, bicycle alliance of washington, blake trask. Bookmark the permalink.

8 Responses to Blake Trask: End days in Olympia – What’s at stake for biking and walking? A lot.