Loper: How Bike to School Month can inspire a shift in your school’s transportation culture 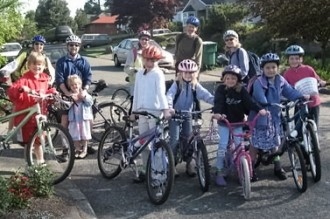 This Wednesday is opening day. Not only for Bike to Work Month, with its streams of bikers joining the Dexter peloton and filling the Burke-Gilman Trail.

It’s also opening day for Bike to School Month, when schools throughout Seattle will encourage families to give bike commuting a try.

Several schools held kickoff events last week to tune up bikes and help kids and families get ready to roll. Many other schools will do the same in the coming days, and over the course of the month schools throughout the city will host events large and small. Some will focus on Bike to School Day on May 8th, while others will encourage a month of bike commuting.

Even a small event on Bike to School Day can be a great way to begin. At Bryant Elementary — now one of the largest bike to school programs in the city — biking to school began with a couple of small, simple bike rides.

Hardly anyone rode their bikes to Bryant in the mid-2000s. In fact,  when my oldest daughter started kindergarten in 2004, there were precisely two kid commuters — siblings with a pair of matching Redline BMX bikes. They were cool bikes, but seeing only two of them parked there day after day was more than a little underwhelming.

Discouraging as this was, a sense of possibility began to emerge towards the end of my daughter’s kindergarten year. I had the opportunity to volunteer in the classroom first thing on Friday mornings, and each Friday my daughter and I rode to school together on our tandem. She loved it! Every Friday, I gave my daughter a choice. How do you want to get to school? The answer was always, “Let’s bike!”

It was so fun to wheel into school, my daughter proud to be traveling under her own power. Walking was great, but biking – now that was pure fun! I thought, hmmm… maybe we’re on to something. If my daughter loves this, maybe other kids would too. 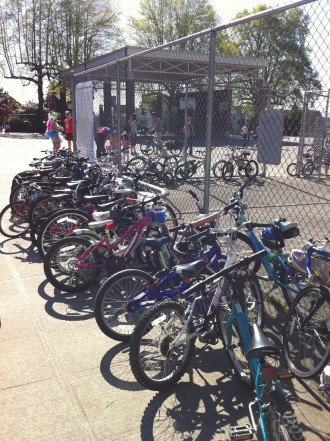 Other parents had their own moments of inspiration, and over a couple of years, several experimented a bit with the idea of kid-powered commuting. It started with a couple of small group rides to school once a year on Bike to School Day. Looking back on it now, it doesn’t seem like much. A dozen or so kids and their parents riding to school on a beautiful spring day. Not a huge percentage of the school by any means, but a fun and visible way for families to vote for active transportation with their bikes. And a way to start something that could grow over time.

Several parents at school also discussed the school’s car culture, mostly to complain about it, unsure what to do. We also debated whether it was worth our time or even possible to try to change things. When my daughter was in second grade, several folks finally decided to give it a shot and try to start a bike to school program.

We didn’t really have a blueprint or any particular idea of what it would take, but we started building a program in that classic school organizing way, asking for volunteers in the school newsletter and chatting with other parents on the playground. We connected with more parents, began organizing bike to school events, and slowly worked to create a bike culture at our local school. We found that making it super fun for kids and parents alike and creating a sense of community was the key.

The last couple of years Bryant has reached a point where we have had 15 to 20 percent of our kids riding to school consistently throughout the spring and as many as 30 percent on Bike to School Day. With many others walking, maybe we are seeing the school transportation culture begin to change, at least a little. But even with all this progress, most days this past winter, there were less than ten bikes parked there. So there is still a long way to go!

It has turned out that parents at other schools have been working on this too. Like Bryant, some have well-established programs. Others, like Loyal Heights Elementary, have begun a program in the last year or two. John Stanford, Denny International and several others are getting started this year. With tens of thousands of school-age kids and their families here in Seattle, a shift in school transportation habits can add up to a huge difference in our city’s daily transportation.

As I’ve written in past posts, a few parent organizers at these Seattle schools decided last year it would be useful to collaborate. Walk.bike.schools was formed to coordinate among schools and share tips and information for how to get more Seattle kids to school under their own power.

What about Bryant’s “early adopters” – kids who frequently rode their bikes to school over a half dozen years and have since moved on to middle school? Some of these 13- and 14-year olds have become eager and competent cyclists, who choose to bike to friends’ houses and to neighborhood destinations, rather than ask for a ride in the family car. Some began biking to middle school from their first day there, with their parents noting that other transportation options weren’t even considered.

Meantime, at Bryant we have focused on a number of approaches to making biking (and walking) to school a more permanent part of the school’s culture. Only time will tell whether a shift in transportation patterns will persist.

Bike to School programs sometimes focus on physical improvements like more and better bike racks, improved access points and safer streets around the schools. These are all important, but success in shifting transportation habits also requires encouraging and supporting kids and families to give active transportation a try. This push for culture change at our schools is at the heart of many bike to school programs. Driving change through people’s habits and a shift in culture is really powerful, and recent research is acknowledging its value in other programs to get more people biking too.

This spring promises to be the biggest yet in Seattle’s growing bike to school movement. If you have a school-age kid or are just interested in building sustainable transportation habits in our community, there is still time to get involved. Getting kids biking to your local school can start small and grow from there, and the benefits will be lasting.

This entry was posted in news and tagged bike to school month, clint loper, walk bike schools. Bookmark the permalink.

5 Responses to Loper: How Bike to School Month can inspire a shift in your school’s transportation culture