Loper: My favorite intersection in Seattle? Well, I’m still looking for it… 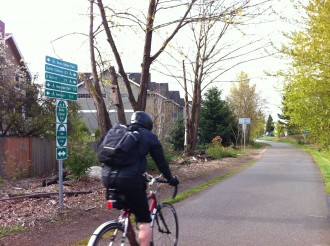 The sign on the Burke at 39th tells the story: you can go anywhere by bike!

When Madi Carlson wrote about her least favorite intersection here on Seattle Bike Blog, it created a stir. Lots of folks — myself included — wanted to chime in and add their least favorites as well. It turned out there were a lot of candidates!

I later had the idea that it would be nice to have a more positive take on bicycling infrastructure in Seattle, and I figured at some point I should write about my most favorite intersection. Maybe at least a few folks would chime in on that one as well.

The idea has circled through the back of my head as I’ve ridden around town these last couple of months. The problem is that — after a lot of riding and a lot of thinking as well — I haven’t really come up with an intersection I could call my favorite! Or at least not one that seems significant enough to really affect the overall bikeability of Seattle.

A couple of candidates emerged. They are all essentially “backwater” intersections that don’t get that much traffic but that work reasonably well. They’re mostly notable though because they have something unique and interesting about them.

One that comes to mind is the new connection of the 39th Ave NE neighborhood greenway to the Burke-Gilman Trail. Both 39th and the Burke in that area are pretty good routes for bikes, and the connection works well. The bonus feature there is the signage at the junction. It includes directions to five destinations by bike, while also indicating you are turning onto both the Burke-Gilman Trail and the Lake Washington Loop. I can’t think of a more powerful and comprehensive bike route sign in Seattle. It provides a really tangible message that you can get anywhere you need to or want to from this location by bicycle. And that’s a message this city needs! It makes the promise of the greenway — when it is part of a fully connected network — all the more exciting. 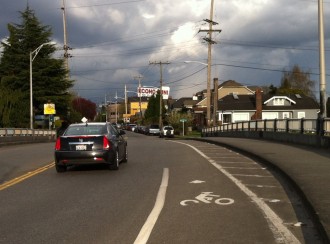 But if intersections like that one are among the best in town for bikers, then maybe there is a broader issue that needs to be addressed. I keep racking my brain and keeping my eyes open for an intersection on a more heavily used bike route — with trickier traffic conditions — that is truly optimized for bike use. I haven’t found one, but if you have examples please share them.

Seattle has built some pretty good bike infrastructure segments these last few years. The buffered bike lanes on Dexter come to mind. The buffered bike lanes on Roosevelt Blvd. NE as well. Certainly the new Ship Canal Trail. But most of these segments essentially dead end. There is no continuity from a reasonable bike segment through the challenging intersection at either end. And the segments don’t add up to a complete system. They often dump a cyclist out onto an arterial where they’re left to fend for themselves. Even the non-buffered bike lanes that are now considered old-tech often run for part of a route and then transition to sharrows or to nothing as they approach the trouble spots. 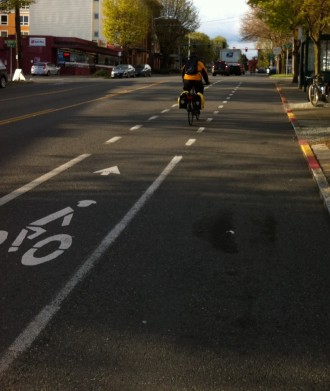 Seattle needs a fully connected system of bike infrastructure to help you get safely and efficiently from wherever you are to wherever you want to go. Ideally, with a couple of options. But for now, can you say “missing link?” The namesake one on the Burke-Gilman is notorious, but if you ride around Seattle enough you find missing links everywhere.

Consequently it’s easier to come up with a favorite road or trail segment to bike on. There are decent bike infrastructure segments all around the city. In this category I do have a favorite, and interestingly it’s not one that’s been recently constructed, or is even formally considered bike infrastructure per se. But check it out if you haven’t already: it’s the section of Interlaken from Delmar up to the 19th and Galer intersection on Capitol Hill. Interlaken is low traffic, forested, meandering, and enjoyable to ride. Sure there’s a hill to climb (or descend) but without much traffic you can take your time. A friend calls it the Golden Mile! 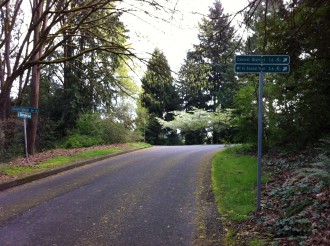 The route through Interlaken Park

Is the route through Interlaken critical for biking to school or work? I don’t know, but it can be helpful. A few hardy kids may use it, as Seattle Hebrew Academy is halfway up the hill and Stevens Elementary is at the top. And for work or any transportation riding, it is a low traffic signed bike route, and a great way to get from Montlake up to Capitol Hill and the Central District.

Alas though — like many other bikeable segments in Seattle — at either end… you’re on your own.

This entry was posted in news and tagged clint loper. Bookmark the permalink.

9 Responses to Loper: My favorite intersection in Seattle? Well, I’m still looking for it…