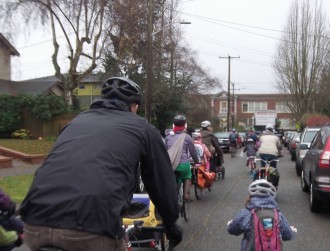 One basic principle of elementary age bike to school programs is that each kid generally rides with one of their parents. Especially when the kids are in their first few years of school.

As children get a little older and more experienced — typically as they approach 4th or 5th grade — some become competent to ride to school on their own or with a sibling or friends. In fact, this is a fantastic goal for kid bikers: it opens up a world of opportunities as they move into middle school and beyond.

Not surprisingly though, kids don’t get to this point without a lot of coaching and support along the way. Let’s face it, safely navigating the 21st century traffic and street system on a bike — even in Seattle’s neighborhoods — requires experience and independent judgment. And this comes with practice and coaching.

Many parents enjoy riding with their own children anyway, and doing so is an obvious way to help kids build real-world biking skills. The parents can provide support, suggestions, and oversight along the way.

“Where should we ride on the road? When is it safe to cross the arterial? What is that car with it’s tail lights on about to do?”

And even… “When is it better to use the sidewalk for a block or two?” (In an ideal world this wouldn’t ever be necessary, but realistically sometimes it is for kids and families in Seattle.)

Seeing parents out riding with their kids and leading by example in this way can be the initial impetus for other families to give it a try too.

But for a school-biking program to grow, sometimes it helps to create a bit more formal structure. In this way a larger group of children can ride along with a few parents or other adults. It’s even better if these adults can help the kids develop bike handling skills and road sense. The kids can learn basic riding skills even if their parents aren’t comfortable themselves on Seattle neighborhood streets, or if they can’t make the time commitment to ride to school.

There are some cool new ideas out there for these elementary school group rides, and they’re creating a bit of buzz both here in Seattle as well as in other communities with growing bike to school movements. Some of these approaches just might work at your neighborhood school too. It does take a village to raise a kid after all!

One cool idea that’s gaining momentum is the idea of “bike trains.” As the name implies, this involves a group of parent leaders riding along a set, timed route, and picking up kids along the way. These have been tried in other cities before, including in Portland where Kiel Johnson has developed bike trains at several schools with great success. The Beach Elementary bike train was even featured in the somewhat iconic video that basically defines Portland’s approach to neighborhood greenways (check it out at 2:47 into the video).

Well, if Portland can launch bike trains, then Seattle can too! Last year, Thornton Creek Elementary decided to give it a try, and within a matter of weeks it had as many as 40 kids riding along. We’ve written about this a few times over at walk.bike.schools, including most recently describing the back story of how the Thornton Creek project got started and some discussion of how the concept can be applied to other schools as well.

A bike train like Thornton Creek’s has a designated leader and a handful of other adults along to help out and ensure safety, but not every kid’s parents need to ride along. If you live along the route, you can literally turn your child loose onto the train as it passes by!

Another concept that’s gaining some momentum is forming bike clubs to support kid riders. Why should adults have all the fun when it comes to joining a bike club and going on group rides? Kids should have that opportunity too, and establishing an after school bike club is another emerging approach to getting elementary school kids out riding and helping them become competent city bikers. Let’s face it, most kids love after-school activities and welcome a good outlet for learning new skills and having fun doing so with their friends. Of course, most parents do too. Some want to help out, while others are just glad for a little afternoon break!

A few schools have tried the idea of forming a dedicated club to support interested kid bikers, but until recently we hadn’t seen one of these at an elementary school. Enter Loyal Heights Elementary. Organizers there just kicked off the Urban Cycling Club a little over a week ago, and it’s off to an awesome start.

I’m excited to see how these two ideas progress and whether they spread to other schools. Supporting preteen bikers in becoming more competent is sure to lead to older kids who are more independent and who don’t need to rely on the family car to get to school or to other neighborhood activities. Empowering kids to be able to get places on their own is good for the whole community!