Five months after SDOT removed an illegal anonymously-painted crosswalk at 83rd and Greenwood, the department has opened a new signalized and official crosswalk at the same location.

The crossing had been a missing link in the N 83rd Street neighborhood greenway, connecting the improved Green Lake bike lanes to the Interurban North bike route and the 1st Ave NW Healthy Street. 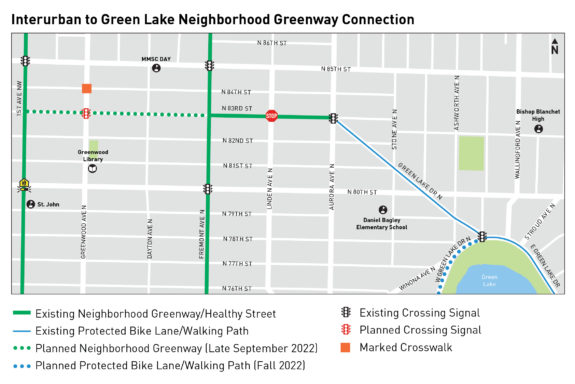 Though the signal was supposed to be part of the greenway from the start, it was delayed. Some neighbors seemingly got sick of waiting and took matters into their own hands, painting a crosswalk in September 2021 that stood for six months before the city removed it.

When is 83rd & Greenwood getting some traffic signs? There’s a crosswalk now but no indication for drivers to slow down until they’re too close to it. pic.twitter.com/SKQ0MJiNrf

NW Greenways is celebrating the new signal noon to 3 p.m. Saturday with a Halloween-themed event to “thank SDOT for making it way less spooky to cross the street.” 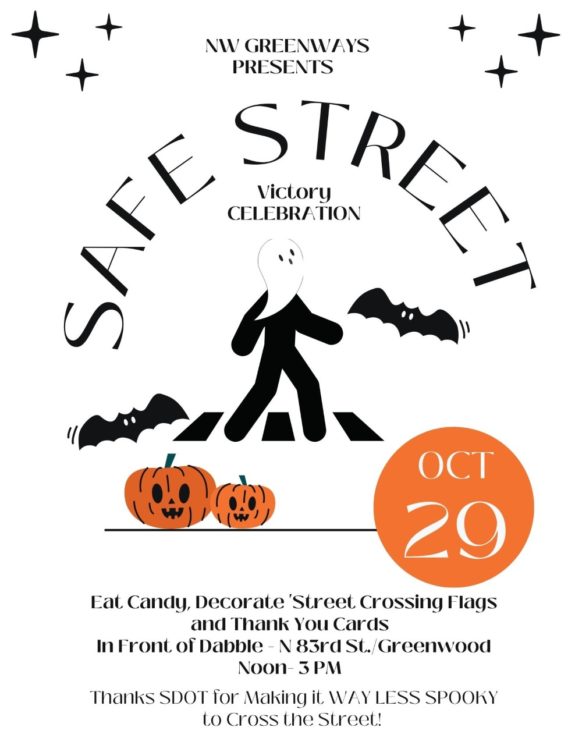 Earlier this week the Seattle Department of Transportation (SDOT)  installed a new crosswalk in the heart of Greenwood, at North 83rd and Greenwood, with all the bells and whistles (a traffic signal, a bike detector, signage and a crosswalk)!

Neighbors are overjoyed by the news, especially NW Greenways volunteers who have been championing the crosswalk … for years. The crosswalk creates safe space at a very busy intersection near Greenwood’s post office, library, two elementary schools along with many businesses, including the very popular Coyle’s bakery.  The crosswalk also links the Neighborhood Greenway, a designated route labeled for bicyclists/pedestrians– connecting Green Lake to First Avenue Northwest and then along other routes to Ballard.

“Urban Tacticians” had been concerned about delays of the dangerous crossing after waiting for years because of budget shortfalls and COVID –finally acted, installing a unique and very visible painted crossing; it was painted in the middle of the night, without city approval. Once up, neighbors attested that the area became much safer noting that cars were both slower, and courteous to ‘crossers’ and stopped blocking the mobility curb ramp for walkers and rollers, as they dashed into Coyle’s for a pastry or went to drop of mail.

But the urban guerilla crosswalk didn’t meet SDOT’s criteria and was ultimately removed (ground out).

While continuing to wait for SDOT to install a sanctioned crosswalk, thousands of neighbors who used this unsafe route were frustrated and concerned: traffic fatalities in Seattle follow a national upward trend and the SDOT is under pressure to make investments that improve safety on the city’s streets.

So, a big sigh of relief (and woo hoo) is being heard from neighbors overjoyed at their new ‘way less spooky’ crossing.