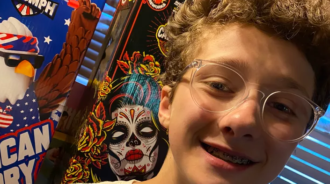 Photo from a GoFundMe for the family of Michael Weilert.

Michael Weilert stopped, pushed the button to make the crosswalk lights start blinking, waited to see that cars were stopping, then rode his bike across busy Pacific Avenue S in Parkland last Tuesday. But even though other people had stopped their cars at the clearly marked crosswalk, a 27-year-old woman drove a Jeep straight through and killed him.

Our deepest condolences go out to his friends and family. They held a memorial (KING 5) over the weekend at the crosswalk where he was killed. You can contribute to a GoFundMe to help support his family through this time.

Mikey’s death is devastating. Several systems failed him and his family. The road is designed dangerously, the driver behaved negligently, and the police added pain and suffering after the fact.

The road, which is also State Route 7, is wide and hostile with multiple lanes in each direction. Even this crosswalk, which had been upgraded with a median “refuge” island and blinking lights, was not enough to make crossing the street safe. It is one of so many busy streets in our state and across the nation that prioritizes the fast movement of cars over the safety of anyone who needs to get across. As is clear from Smart Growth America’s new Dangerous By Design 2022 report, this is a problem across our nation that is getting worse.

Pacific Avenue has inherent safety deficiencies that are well-known to traffic engineers. In this case, the collision seems to stem from its “multiple threat” design failure in which even if one driver stops, there is no guarantee that the driver in the next lane will also stop. Here’s how Seattle’s Safe Routes to School Engineering Toolkit illustrates the problem:

From the Seattle Safe Routes to School Engineering Toolkit (PDF).

The good news is that we know how to solve this problem: Reduce the number of general traffic through lanes. Highway-style designs have no place on streets that go through communities. Traffic engineers across the world have found that one lane in each direction with turns lanes where appropriate can carry a large number of vehicles per day far more safely. WSDOT data shows that this section of Pacific Avenue (near 134th Street S) carries about 30,000 vehicles per day, which is a few thousand more than Rainier Ave S. Rainier was formerly State Route 167 and has been one of the city’s most dangerous streets thanks to its highway-style design. Seattle conducted a full before and after study (PDF) demonstrating a successful 2015 safety redesign on a stretch of Rainier. It found that the number of serious injury or fatal collisions plummeted in large part due to the elimination of the multiple threat problem. It took about a minute longer to drive on the street, but serious injuries and deaths went from 10 per year to 0. That is well worth a minute.

Mikey’s family has also called for what they are calling “Michael’s Law” improving the safety of crosswalks in the state, according to King 5 News. They don’t want anyone else to have to go through what they are going through.

But unless the state and local agencies put in the work to redesign streets, this will keep happening again and again on Pacific Avenue and other streets across the state that have the same problems.

This one is the most obvious failure. There is no excuse for failing to stop at a crosswalk when other vehicles are already stopped. Just because you might not be able to see the person crossing, a reasonable driver would have to assume that those other people stopped for a reason. Police at the scene said they did not find evidence she was impaired or that she was driving recklessly, but they did fault her for failing to yield (more on that below). As Michael’s mom Amber put it in a heartbreaking interview with KIRO 7 News, “I can’t imagine knowing that someone is stopped — any car is stopped — at a crosswalk and you wouldn’t stop too. Just that behavior alone is reckless.”

At the very least, she seems like a candidate for Negligent Driving in the Second Degree, also known as the “Vulnerable User Law.” This law was created for situations like these where someone is killed or seriously injured due to a non-criminal driving error. Whether a more significant charge like Reckless Driving is applicable in this case is up to the prosecutor.

Amber’s words were powerful, and it is painful that she even needed to argue with a faulty trooper interview in the midst of all her grieving. But unfortunately, she did because State Trooper Robert Reyer told the Tacoma News Tribune a series of hurtful statements in the immediate aftermath of the deadly collision. Trooper Reyer bent over backwards to try to absolve the driver of the Jeep, saying, “He all of the sudden appeared in front of her car, and she was unable to stop.” If someone is approaching a marked crosswalk with blinking lights where other cars are already stopped, it is simply inaccurate to use the phrase “he all of the sudden appeared.” There was plenty of warning. Further, Trooper Reyer told the News Tribune that the driver would not face criminal charges and did not receive a ticket.

Police do not press charges, prosecutors do. So it was inappropriate and unnecessary for the trooper to say that no charges would be filed. After a major backlash due to these statements, Washington State Patrol noted in subsequent interviews that the investigation is ongoing, and that the Pierce County Prosecutor could bring charges at a later date.

But imagine being one of Michael’s loved ones in midst of horrible grief, and then reading in the very first news story that there would be no consequences for the person responsible. What a horrible thing to put them through. Amber should not have felt the need to argue the law with a Trooper in the middle of a memorial for her son.

Pacific Avenue is far from the only state route that is designed to put anyone crossing the street at risk. After many years of advocacy from safe streets proponents across the state, WSDOT released its Active Transportation Plan in 2020, a document packed full of data identifying the scale of the problem as well as ideas for making streets safer. It found that 83% of deaths on state routes occur on the 24% of it’s routes that run through population centers like Parkland. In total, the plan identified an estimated $5.3 billion in state route safety upgrade needs “based on gap analysis of current conditions in populations centers.” That’s a lot of money, but the people of Washington are worth it.