How to bike naked in the revamped Fremont Solstice Parade 2022 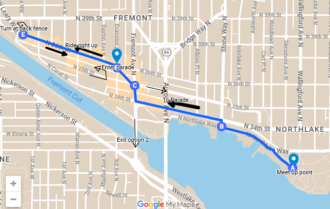 From the Solstice Cyclists website. Visit the site for a more specific description. Or just show up and follow the crowd.

For the first time since 2019, the Fremont Solstice Parade is back. And of course that means hundreds of people are getting ready to strip down Saturday (June 18), paint their bodies and ride their bikes ahead of the official parade. And this time, the meet-up is happening at Gas Works Park.

Crashing the Solstice Parade with a naked or body-painted bike ride has been a tradition since the early 1990s, but the ride gained popularity in the 2000s and 2010s as the number of riders increased to hundreds or even thousands some years. I highly recommend the documentary Beyond Naked, which covers the history of the event in the lead-up to the 2011 ride. That film is also a good reminder that even somewhat chilly and drizzly weather won’t stop the Fremont Solstice Parade.

The 2022 parade route has significantly changed, and so has the biking plan. Perhaps most notably, there is still no big 2022 paint party location. “We do not yet have a paint party location that will accommodate the bulk of the riders for this year,” notes the Solstice Cyclists website. You can check back there to see if this changes, but you should plan on another option. Just, you know, make sure you help your friend clean their backyard when you’re done.

Here’s the schedule for participation in the bike ride:

Morning: Paint up, then ride to Gas Works Park.

If you have never ridden in the parade before, the Solstice Cyclists FAQ is full of helpful information and advice. But here are some major items to know:

This event happens in public, obviously, so that means people will be taking photos. So take that into consideration with your costuming. It’s not in the spirit of the event for creepy dudes to be taking lots of photos, but it could happen. Also, don’t be that guy.

The best “paints” to use are face paints and theatrical make-up liquids and cakes. The Solstice Cyclists list these brands as popular options:

Many riders have used acrylic paint in years past, but just know it’s not meant for use on bodies. And don’t bother trying to use tempera paint. It will flake off.

Apply sunscreen and give it time to soak in before applying paints. It’s the afternoon of Solstice weekend! The strongest sunlight of the entire year.

Make sure you have a way to carry your clothes with you on the ride so you can get dressed at the end.

A plastic bag or saddle cover for your bike seat is a good idea.

Be creative, express yourself and have fun!