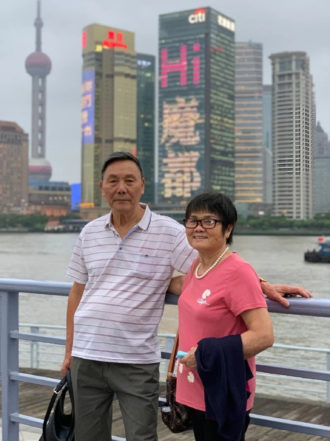 Gan Hao Li and Cui in Shanghai. Photo courtesy of Linda Vonheim to the Times.

The person killed while biking in SoDo May 11 has been identified as Gan Hao Li, the Seattle Times reports. He was 73.

Li immigrated from China and lived at Hirabayashi Place in Chinatown International District with his wife Cui. David Kroman at the Times spoke to several in his building about Li.

“He and his wife were just enjoying their retirement, growing old together,” [former building manager Linda] Vonheim said through tears, “and now that’s been taken away from her.” […]

“He was just a great man, one of the pillars of our community at Hirabayashi,” she said. “If you needed help he would be right there. He would never say no to anybody.”

Crystal Ng also lives in Hirabayashi Place and started to suspect something was wrong when she didn’t see his bike in the storage area. Ng often helped Li, who spoke little English, communicate with others in the building. “He always asked me if I’d had dinner yet and tell me that he hadn’t seen me for a long time,” she told the Times.

This entry was posted in news and tagged deaths, gan hao li. Bookmark the permalink.