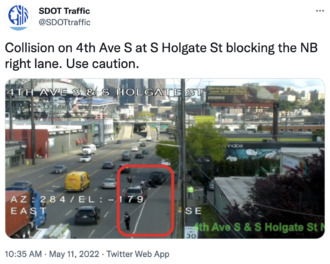 A person driving a Jeep struck and killed someone biking in SoDo Wednesday morning, according to Seattle Police.

The driver of the Jeep was trying to exit a parking lot onto 4th Avenue near Holgate Street, and told police they were looking south for a break in traffic so they could turn north onto 4th. The person biking was headed southbound on the sidewalk. “The driver collided with the cyclist while turning on to 4th Avenue,” police said.

We send our condolences to their friends and family.

The collision was just a block away from the site of another fatal collision in early January. A person driving westbound on S Holgate Street collided with and killed Antionio Tiongco as he biked across Holgate at 3rd Avenue S. Both cases unfortunately highlight the lack of safe biking and walking routes in SoDo, which has very wide roads with few quality street crossings and no complete and connected bike infrastructure. As Ryan Packer reported earlier this month,”Almost exactly two years before the [January] 2022 incident, on January 7, 2020, Douglas Mayhew was walking across Holgate at 8th Ave S, where there is no marked crosswalk, when he was struck by the driver of a vehicle. He later died of his injuries. On October 2nd of that year, another pedestrian was struck and killed at 1st and Holgate. SoDo’s wide streets and unforgiving intersections are not designed with the safety of people outside vehicles in mind.”

Councilmember Tammy Morales wrote on Twitter,” There are 4000+ miles of road in the city and less than 1 percent of it is protected bike lane infrastructure. These fatalities are unacceptable because they’re avoidable. My heart goes out to the victim’s family. I hope people will join in advocating for safer streets for all.”

Though it is not yet clear if it is related, the collision occurred around the time that the lower West Seattle Bridge was closed unexpectedly for an extended period of time. Anyone biking between West Seattle and downtown would have needed to detour to the 1st Avenue Bridge by biking through SoDo. Whether this person was detouring or not, the bridge closure highlighted yet another reason why safe routes through SoDo are needed. SDOT is set to begin the design process on a Georgetown to downtown protected bike lane this year. If all goes according to the current schedule, the lane should be open by the end of 2024.

SPD detectives are investigating after a driver in a Jeep fatally struck a cyclist Wednesday morning in a collision on 4th Avenue.

Around 10:30 AM, the driver of the Jeep was turning out of a parking lot along 4th Avenue South and Holgate Street, preparing to turn north. The driver stopped to wait for vehicle traffic and was looking south when a cyclist approached on the sidewalk from the north. The driver collided with the cyclist while turning on to 4thAvenue.

Seattle Fire personnel were in the area and immediately responded to render aid. The cyclist later died from their injuries.

The driver remained at the scene and was interviewed by police. He showed no signs of impairment. Traffic Collision detectives continue to investigate the incident.