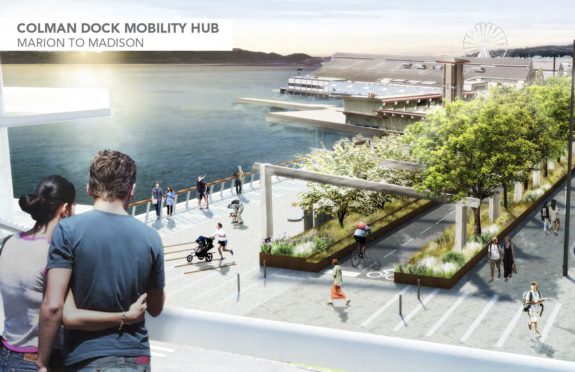 When complete, the waterfront bikeway may become a Seattle icon.

Seattle’s downtown waterfront has been under construction for so long, it’s sometimes easy to forget that when the dust finally settles there will be a complete waterfront bikeway for the first time in Seattle history. Upon opening, this bikeway will surely become an icon of the city, the setting for countless photos showcasing our beautiful city. In 2024, it should be possible to bike from Pioneer Square to the Burke-Gilman Trail entirely along flat, separated bike lanes and trails. By 2025, this continuous connection will extend all the way to Alki and South Park.

This is the most important bike route under construction in Seattle, and we must do it right. But the high-budget Waterfront Seattle project ends north of Pike Place Market, leaving a nine-block gap between the flashy new bikeway and the existing Elliott Bay Trail in Myrtle Edwards Park. 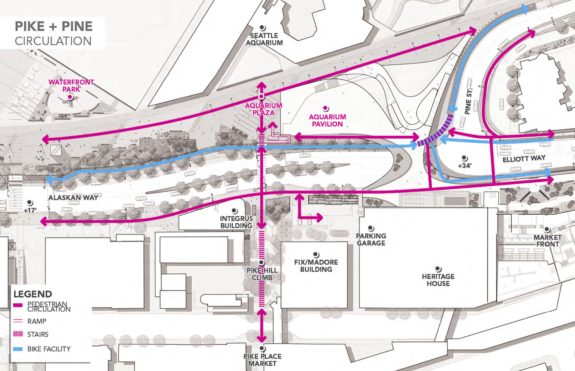 The northern end of the Waterfront Seattle project shows how the bikeway (blue lines) will continue along the west (waterfront) side of Alaskan Way until Virginia Street.

SDOT is currently designing a redesign of Alaskan Way through Belltown that will include a bike connection, but the current design concept bafflingly switches sides of the street twice within a span of six blocks. They are hosting an online open house about the project 4:30 p.m. Tuesday on MS Teams, which is a great opportunity to comment. Seattle Neighborhood Greenways also has a handy online form you can use to send a letter to elected officials. 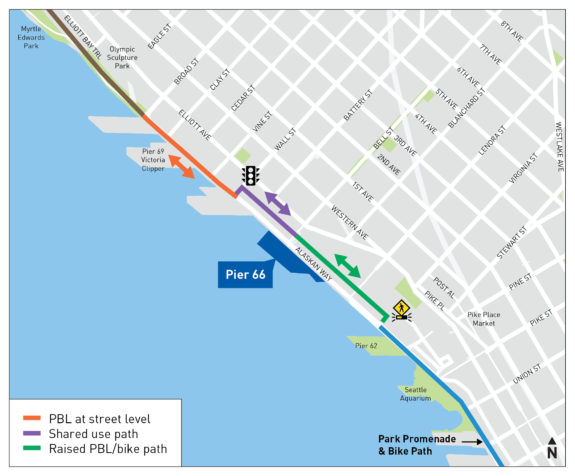 “This design is inconvenient and confusing,” wrote Seattle Neighborhood Greenways in a blog post. “A lot of people likely won’t use it and will end up in the street or on the sidewalk, causing additional chaos and danger for both pedestrians and people on bikes — especially with the tens of thousands of tourists who use our waterfront trail each year.”

The zigzag is an attempt to “support sailing operations at Pier 66 and 69,” according to SDOT’s project page. And the cruise terminal does get busy during loading and unloading. But those loading times are fairly rare and very seasonal. It does not make sense to create a 24/7/365 bike lane detour to accommodate an intermittent use. “Pier 66 has heavy use for just 2 months in the summer, and tapering off in the shoulder seasons,” wrote Greenways. “Ask SDOT to work with the Port to find a solution that allows them to have safe loading and unloading, while maintaining a direct and efficient bike route.”

If the city were going to build this bike route along the east side of the street, they needed to make the part of the Waterfront Seattle design years ago. But with the waterfront design already under construction, the decisions to route the path along the west side of the street is set in stone. There is plenty of road space on Alaskan Way to work with here. I believe SDOT’s capable staff are able to find a solution that works well for everyone.

It’s hard to fathom how the engineering wizards at @seattledot can’t find room for a continuous bike lane here. pic.twitter.com/iG8ubjyj2T