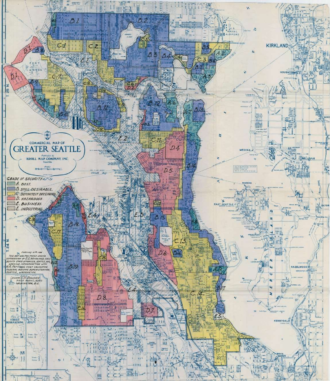 In news that is both horrible and unsurprising, a team of researchers from UC Berkeley and UW in Seattle have published a study demonstrating that “redlined” areas of cities marked in federal maps from the 1930s had higher levels of air pollution in 2010.

Redlining was the discriminatory practice of withholding loans or other private and public investments from certain areas within cities based largely on the race of the people living there. Redlining was legal in Seattle until 1968, though the legacy of the practice continued in many forms even after it was outlawed by city ordinance. Though the practice of withholding investments or properties from people of color long predates 1930, that was when the federal government commissioned a set of maps from cities around the country, including Seattle, to rate the “security” of mortgage investments in different areas of each city. The Home Owners’ Loan Corporation (“HOLC”), which was tasked with helping struggling homeowners during the Great Depression to refinance their mortgages, created maps that illustrated and codified existing prejudices and racist practices. Communities of color were often rated as “Hazardous” and given a “D” grade. “A” grades were mostly reserved for wealthier and whiter communities.

HOLC did not invent the racist practices behind redlining, but they did make it very obvious by drawing the lines on public maps. Researchers today can now use those same maps to learn how segregationist practices a century ago affect communities today. And that’s exactly what the researchers did in this new study. They compiled a huge database of census blocks that included 2010 air pollution levels as well as the 1930s HOLC grade, then looked for correlations. Nationally, areas with “D” grades in the 1930s had 56% higher levels of nitrogen dioxide in 2010 than “A” graded areas.

There are many mechanisms leading to this air quality disparity, but they all add up to racist results because that’s what happens when there is wide-reaching systemic racism. Poor air quality can come from many different sources, though the worst of it comes from highways and polluting industry. Freeways and other wide highways were often purposefully routed through redlined areas as a form of so-called “Urban Renewal,” which James Baldwin called “Negro Removal.” Freeways are a major source of nitrogen dioxide pollution. Wealthier and whiter areas have also had more means and political connections to fight the incursion of polluting industry into their neighborhoods, preserving the clean air quality in “A” graded areas.

This is why projects like South Park’s SR-99 removal project are so important, and just the beginning of the work needed to try to heal the wrongs of the past.

The Seattle Times put together a set of maps demonstrating the study’s findings in Seattle:

“These maps, which were drawn by people who are no longer alive, this racist urban planning from the 1930s, is still having an impact on the air pollution inequality that we face today,” said Julian Marshall, one of the report’s lead authors and a professor at the University of Washington, where he serves as associate chair for Justice, Equity, Diversity and Inclusion as well as the director of the university’s Grand Challenges Impact Lab.

Crosscut also has a good story on the new study, including quotes from Edwin Lindo, a leader of NorthStar Cycling and a professor at UW School of Medicine (though he was not an author of the study):

“What the data tells us is that systemic racism still kills people in 2022, even though the people who laid the foundation of that racism … are already dead,” says Edwin Lindo, who is an associate teaching professor in the UW School of Medicine’s Department of Family Medicine and assistant dean for social & health justice.

“We can’t allow our residents to live in polluted communities that were intentionally built to harm them. … We acknowledge redlining existed. We acknowledge the racist folks that implemented those policies. We acknowledge, now, the harm that it’s causing,” he says. “So now … there must be some form of reparation.”