For the first time since 2019, the Fremont Solstice Parade returns June 18 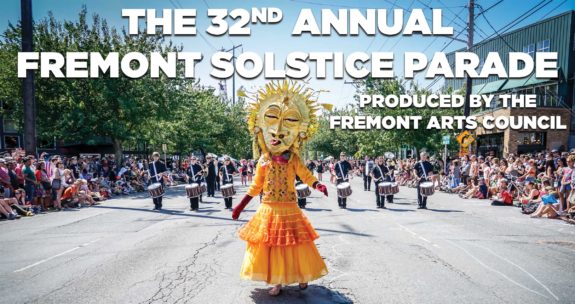 I am so happy to hear that the Fremont Solstice Parade is back. June 18, mark your calendars.

The maps even have bicycle icons printed on them! Does this mean the years of the Fremont Arts Council resisting the painted bike parade are officially over? I sure hope so.

For anyone who has never had the pleasure of witnessing (or participating in) the Fremont Solstice Parade, you are in for a treat. It might be the best day of the year in Seattle. The city welcomes the seemingly neverending sun with a wonderful display of creativity.

The whole parade is wonderful, but the best-known part started as a prank in the 1990s when a couple people got naked and streaked ahead of the parade on their bikes. The tradition of biking naked before the parade built slowly through the 90s until 1998, when Seattle Police decided to crack down on the tradition and arrested a rider. The arrest drew boos from the crowd, and kicked off a big debate in the city about puritanical thinking that then-Councilmember Nick Licata described as “a defining moment” for Seattle. I have a whole section about the history of the Solstice bike ride in my upcoming book (which will definitely be complete some day I promise). I also highly recommend the 2013 documentary Beyond Naked all about the tradition.

Anyway, back to 2022. It’s been 33 months since the last IRL Solstice Parade, and our city is in desperate need of the joy and community it brings. The 2022 route is currently slated to be shorter than in previous years, and it looks like it may even avoid closing the Fremont Bridge. Instead of heading to Gas Works Park, the route will end at Evanston inside the Fremont Fair grounds. This makes a lot of sense for the proper parade, which is a very slow-moving, people-powered spectacle. I’m sure are still working out the logistics for the bike ride, so stay tuned. 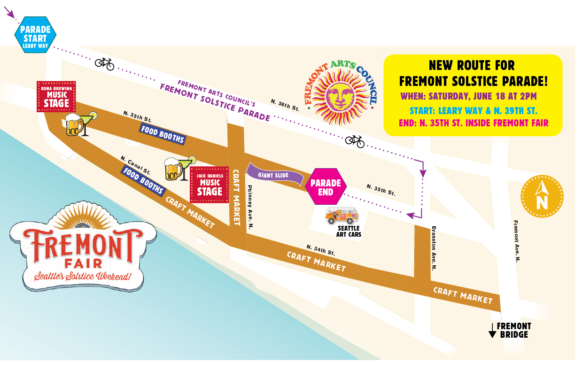 Map of the parade route, via MyBallard.

From the Fremont Fair:

The 32nd Annual Fremont Solstice Parade, produced by the Fremont Arts Council, blasts off on Saturday June 18, 2022 at 1:00 p.m. at 3rd and Leary Way and continues along 36th Street through Fremont. Come be dazzled as more than 60 community- based ensembles parade down the streets of Fremont with giant puppets, stilt walkers, floats, dancers, cyclists, and musicians in this kaleidoscope of joyous human expression.