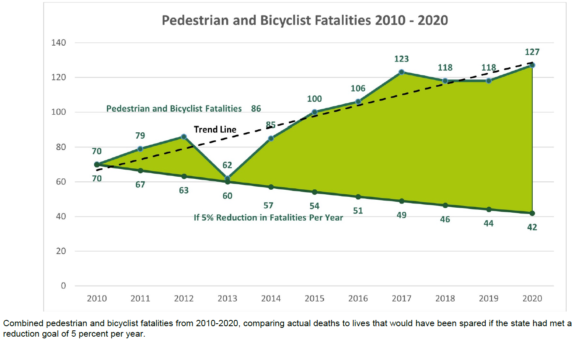 The number of people killed while walking or biking in Washington is headed in the wrong direction. Images from Secretary Millar’s presentation (PDF).

Washington Transportation Secretary Roger Millar argued against further highway expansion during his State of Transportation presentation to the House Transportation Committee this week. Instead, he argued for “a resilient response” to the state’s major challenges, including climate change, inequitable traffic impacts and increasing traffic injuries and deaths.

“We are a Target Zero state, and we’re going the wrong way,” said Millar. “The data shows our system isn’t safe. It kills people, and we need to invest to stop that.” WSDOT estimates that the monetary cost of collisions, injuries and deaths is about $14 billion per year. Of course, a life is more important than money. 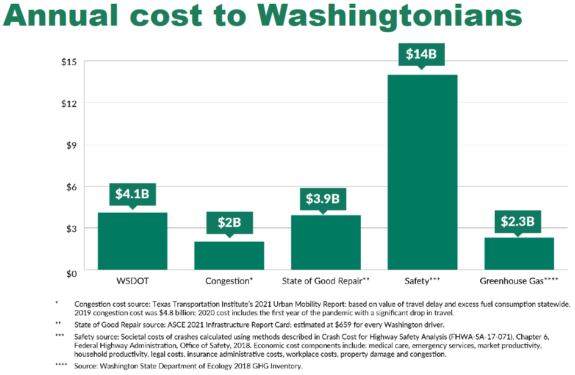 Meanwhile, the state is investing less than half of what it should be investing to maintain existing infrastructure. The state has been building a lot of new and expanded infrastructure, which only makes it more difficult to maintain the infrastructure the state already has. As that new infrastructure comes due for maintenance, the backlog gets that much worse. At this point, the state would need to spend about a billion dollars more per year than it is currently spending just to tread water. 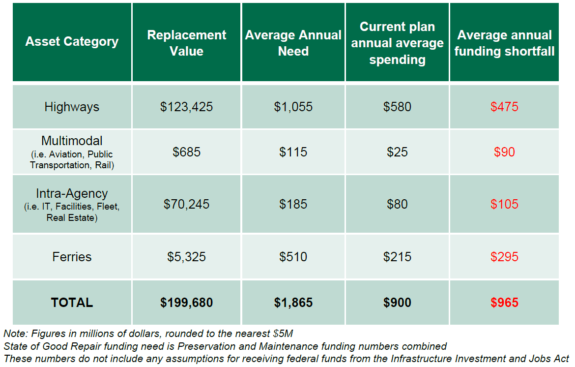 One part of the solution is to stop trying to expand highways to solve congestion. WSDOT gave a rough estimate that it would cost upwards of $115 billion over ten years to add enough lanes to freeways to allow people to drive the speed limit at all times. That would require as much as $2.50 per gallon in additional gas taxes. This rough estimate does not even include all the costs associated with increasing local and connector roads to meet the induced demand from the newly-widened freeways.

Another part of the solution is to find ways to better use the infrastructure we have and invest in alternatives to driving. Providing affordable housing options close to jobs is “the single best thing” the legislature could do to help meet this goal, he said. When people live close to jobs and their other destinations, they can more easily walk and bike to get what they need.

The state’s brand new Active Transportation Plan identified $5 billion in needs, including things like sidewalks, paths and bike facilities across the state. Transit needs and opportunities, which pair well with these active transportation investments, are also extensive.

Hopefully legislators listened to Secretary Millar’s assessment of the state’s needs with an open mind. They are working to build a major funding package during this short session, and the path to changing WSDOT’s work starts with legislators, not the Secretary. WSDOT is tasked with building the projects that the legislature earmarks whether those projects are good or not. If legislators stick to the same old pet project earmarking that has plagued previous transportation funding packages, then our state will get the same old results: More costly car infrastructure we can’t afford to maintain that further entrenches communities in an endless reliance on unsustainable and unaffordable private car transportation. Or they could do things differently, prioritizing highway spending that maintains safe infrastructure, expanding funding for walking, biking and transit so people don’t need to drive, and investing in communities harmed by past highway construction.

You can watch the whole State of Transportation presentation on TVW: