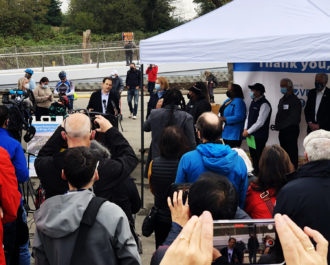 Sam Zimbabwe speaking at the opening of the John Lewis Memorial Bridge in Northgate.

It feels like Sam Zimbabwe never had the chance to lead the Department of Transportation without an emergency beyond his control dictating the work of the day. With the news that Mayor-Elect Bruce Harrell will not keep him on after the year’s end, Zimbabwe’s tenure as Director ends with some remarkable accomplishments considering the circumstances.

Zimbabwe arrived in Seattle in early 2019 to discover an agency in shambles and a city in the midst of major traffic and transit crunches downtown as buses were kicked out of the transit tunnel and the Alaskan Way Viaduct finally closed for good. He had essentially no role in planning these shutdowns, but he was in the big office when they happened. Oh, and there was a big snow storm in the middle of it all. Then shortly later he had to defend the Mayor’s decision to cut bike lanes from the repaved 35th Ave NE, which immediately put him in a tough spot with safe streets advocates who were already very frustrated with the total lack of progress on the city’s bike network since Mayor Durkan took office in 2018.

But things started to change under Zimbabwe’s leadership. Bike lane construction restarted, focused on connecting the downtown bike network. Morale at SDOT also seemed to improve (I don’t have any hard measurement of this, but it sure seemed like staff were happier than they were before).

Then COVID hit. Then in the early days of the pandemic shutdown, the West Seattle Bridge was discovered to be at risk of collapse and had to be closed indefinitely. It’s as though a decade worth of major city transportation challenges all hit during the first year of Zimbabwe’s tenure. Yet through it all, SDOT was still able to innovate solutions to make the city’s streets better for everyone. The department opened a series of Stay Healthy Streets, designed to clearly prioritize walking and biking while still allowing slow local car traffic. They also continued working on the downtown bike network, completing the final pieces of a protected bike route connecting from the Burke-Gilman Trail through the heart of downtown to the International District. You can see this route in action:

It’s a shame Zimbabwe didn’t get a chance to show us how he would lead the department without a major emergency drawing most of his attention. He also will not have the chance to develop the city’s next major funding priorities. Instead, his three-year tenure will mostly be known for his improbable navigation through a truly wicked storm.

SDOT Chief of Staff Kristen Simpson will be Interim Director while the Harrell Administration conducts a national search for a new Director. Simpson has told Harrell she will not be seeking the permanent role. He praised Zimbabwe while also laying out his vision for an SDOT “that centers equity throughout our transportation network across every street and sidewalk, in every neighborhood and community,” Harrell said in a statement. “We must create a balanced transportation ecosystem – increasing safety and decreasing travel times by bolstering transit, improving sidewalks, protecting bike lanes, and recognizing the role of cars and new electric vehicles.” Of course, some of these priorities will inevitably come into conflict. What happens when increasing safety does not decrease travel times for cars? It likely won’t take long into his term as mayor before he needs to make such a decision.

Mayor-Elect Harrell and his eventual pick for SDOT Director will have an enormous impact on the city’s transportation future potentially stretching into the 2030s. The nine-year Move Seattle levy, which Harrell voted to advance as a Councilmember, expires at the end of 2024. The Harrell Administration will need to lead an effort to bring people together around a replacement of some kind. 2024 is also a Presidential election year, of course, which means a transportation levy vote could come up during a very high-turnout election. It’s an incredible opportunity to pass a measure that turns heads across the nation and sets a new standard for American transportation departments.

“Today, I am announcing that when I take office in January, I will be making a change in Seattle Department of Transportation leadership. We will embark on a robust national search for a new director who is aligned with my vision for this critical department. As we embark on that search, I will appoint SDOT Chief of Staff Kristen Simpson to serve as interim director. Kristen has let me know that she will not be applying for the permanent position.

“Going forward, my vision is for a Seattle Department of Transportation that centers equity throughout our transportation network across every street and sidewalk, in every neighborhood and community. We must create a balanced transportation ecosystem – increasing safety and decreasing travel times by bolstering transit, improving sidewalks, protecting bike lanes, and recognizing the role of cars and new electric vehicles.

“From Vision Zero to net zero, we will prioritize climate resilience and lead at the intersections of accessibility, reliability, safety, and sustainability.

“I want to thank Director Zimbabwe for his service and dedication to the City of Seattle. His leadership and quick action closing the West Seattle Bridge no doubt saved lives and has put the bridge on track to open in mid-2022. His response to the pandemic – thoughtful and meaningful efforts like Stay Healthy Streets and outdoor dining permits – should be celebrated. I wish him all the best in the future.”

This entry was posted in news and tagged bruce harrell, sam zimbabwe, sdot. Bookmark the permalink.