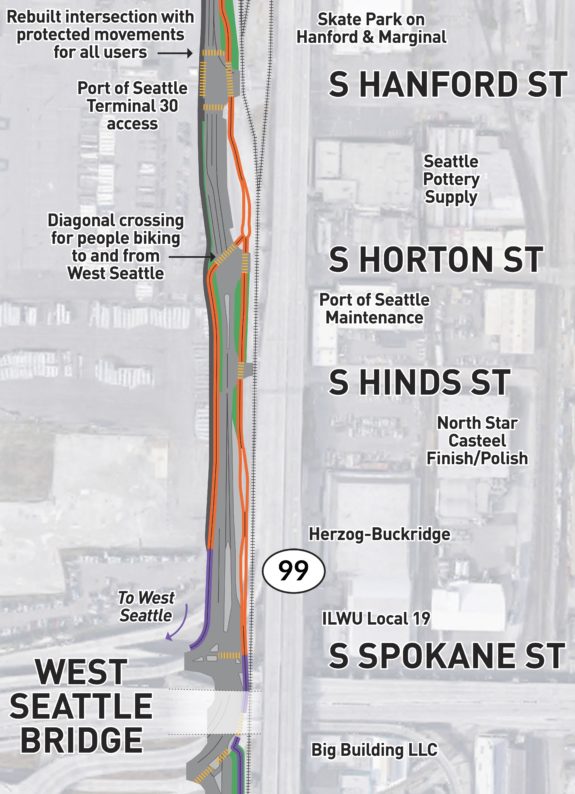 Excerpt from the project design (PDF).

With $20 million in federal funding, Seattle now has enough money to complete a long-planned E Marginal Way rebuild in SODO. Final design is scheduled to be complete in early 2022, with work beginning later in the year. Construction should be complete by 2025.

The $20 million in federal funding comes from the Rebuilding American Infrastructure with Sustainability and Equity (RAISE) program, and an additional $7.1 million comes from the Move Seattle Levy. The Port of Seattle and the Freight Mobility Strategic Investment Board will also contribute funds to the project.

“The grant funding will enable us to do both the safety improvements and the road reconstruction at the same time,” SDOT wrote in a press release. “This means that there will be fewer disruptions to freight traffic during construction.”

The project has such a high price tag primarily because the entire roadway will be reconstructed to accommodate heavy trucks from the Port. The existing sidewalk will also be reconstructed and brought up to accessibility codes. The new protected bike lane will travel along the east side of the roadway for most of the route. Between S Horton Street and the West Seattle Bridge, an additional two-way bikeway will travel along the west side of the street to connect the West Seattle trail network to the new bikeway.

If we zoom out a little bit, the implications of this project are remarkable. When combined with the under-construction downtown waterfront bikeway, the E Marginal Way bikeway would create a fully complete and protected bike route from Alki to downtown Seattle and beyond. If the waterfront bike lanes are indeed connected to the Elliott Bay Trail like they should be, then there will be a connection through Interbay to the Ship Canal Trail (and therefore the Burke-Gilman Trail) and the larger regional trail network. Then if the Duwamish Trail is finally connected to the Green River Trail, wow. In a few years, it should be feasible to bike more than 50 miles from the northern border of King County in Woodinville to the southern county line beyond Auburn almost entirely on trails or protected bike lanes. Suddenly, connecting the Foothills Trail in Pierce County to the Centennial Trail in Snohomish County feels within reach.

Combined with the EasTrail work underway over the next few years, the number of new additions and connections for the regional trail network are enormous. So many people have worked on so many different pieces of walking and biking improvements across the region, and they’re all coming together in the next few years. Get ready.

This entry was posted in news and tagged marginal way, rebuilding american infrastructure with sustainability and equity, sdot. Bookmark the permalink.