With University Bridge stuck open, here are your bike detour options (none are great) – UPDATE: Open! 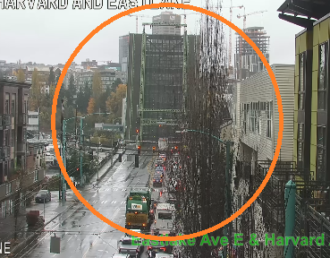 The University Bridge got stuck open Friday morning, and it has remained stuck into the afternoon. SDOT does not yet have an estimated time for it to reopen, so it may be wise to plan for a different route this evening. I will update this post when I learn more, but you can also check the @SDOTtraffic Twitter account for the latest.

Unfortunately, there is no great detour option south of the Ship Canal for people biking or walking. If you are heading north from downtown and are not familiar with biking to the Montlake Bridge, consider taking the Fremont Bridge instead even if it adds significantly more distance. It is the most intuitive and comfortable bike route option, and those extra miles are mostly on comfortable bikeways and trails.

If you are already in Eastlake near the south end of the U Bridge, the only option that doesn’t involve going all the way back to South Lake Union is to travel to the Montlake Bridge. Unfortunately the bike route options kind of suck. The only flat and somewhat direct option is to ride on Boyer Ave, which does not have bike lanes and will be extra busy due to the closure. Take a left on E McGraw Street, then left on 18th Ave, then right on E Calhoun Street. At the end of the street, there is a trail to the left that travels along the side of the field. That is called the Bill Dawson Trail, and it goes under SR 520 and spits you out onto the west sidewalk of Montlake Boulevard just south of the Montlake Bridge.

Another option for people starting downtown or on Capitol Hill is to take Melrose Ave to  Lakeview Blvd to Boylston Ave, then turn east on Roanoke until it curves right and turns into Delmar Drive E. That will intersect with Boyer at a confusing traffic oval thingy. Go straightish and make your way to E Calhoun Street and the Bill Dawson Trail like above. Or if you really want a much longer and more scenic ride, take Interlaken Boulevard instead of Delmar, then connect to the Lake Washington Loop at 26th Ave E (the trick is that once you cross busy 24th Ave E, you have to veer left and take this little alley down to 26th Ave E because Seattle bike routes make no sense sometimes).

Boyer Ave really needs bike lanes because these bridge closures require such an uncomfortable detour and Boyer is the only flat option to get between them.

Do you have a route suggestion I missed? Let us know in the comments.

5 Responses to With University Bridge stuck open, here are your bike detour options (none are great) – UPDATE: Open!