NOTE: The 2021 primary election is August 3. The deadline to register or change your address online in King County is July 26, but you can register and vote in-person through Election Day. Don’t procrastinate! It’s summer, and August 3 is going to come up fast. 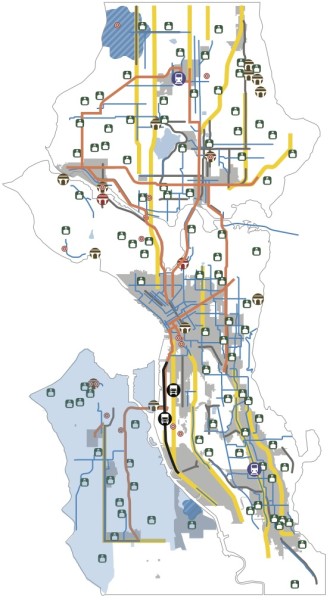 This map shows the ambition of the 2015 Move Seattle levy. All this was supposed to be funded, and it’s walk/bike/transit focus inspired strong voter approval. What will the next mayor’s vision look like?

The 2021 election is likely the most important Seattle election since 2015 for safe streets, bicycling and walking.

The next mayor will lead the development for whatever follows the Move Seattle transportation levy, which expires at the end of 2024. Developing the levy requires the mayor and the City Council Transportation Committee to work together with a shared vision, but the mayor will likely be the primary public-facing leader of the effort. Because the city has been following a 9-year transportation levy renewal system, the next levy vote happens to coincide with a very high turnout Presidential election. Seattle will have an incredible opportunity to pass a very bold and ambitious funding package, the kind of effort that sets a new standard for what local transportation funding can accomplish.

But the next mayor will have an enormous amount of work to do before the 2024 vote because they will be inheriting a heap of problems and public distrust. Mayor Jenny Durkan has squandered her time in office, failing to deliver the promises that Move Seattle made to voters back in 2015. Biking, walking and transit promises were dramatically scaled back, and a lot of the people that Seattle will depend on to pass another transportation measure are angry. At the same time, the West Seattle Bridge fiasco has understandably frustrated a lot of people.

So the next mayor will first need to restore public trust in the Department of Transportation and in the city leadership’s willingness and ability to maintain our infrastructure and follow through with its bold promises. They will have a couple years to turn things around before voters go to the polls, but they will need to get started immediately after taking office. This is no small feat, but it’s also very achievable. The next mayor will need to deliver some high quality and impactful projects from the Move Seattle levy plan that genuinely improve people’s everyday mobility. And they will need to be able to educate the public on the value of these investments.

In the years leading up to the next vote, the city will also need to reassess its transportation needs and priorities. This effort will help guide the creation of the levy. Before the 2015 vote SDOT and Mayor Ed Murray created what they called the Plan to Move Seattle. That plan was very exciting, but it has since proven to have been unrealistic without more funding than was available in the levy (partly because it did not predict an unfriendly Federal government). So Seattle’s next mayor needs to be both bold in ambition and realistic about cost forecasting. We will need a mayor that the voters will trust.

During the 2017 mayoral election, transportation wasn’t a top-tier issue. The Move Seattle and Sound Transit 3 ballot measures had both passed recently, so the mayor really just needed to hit cruise control and let SDOT build what voters said they should build. And both candidates in the general election said they were going to build out the city’s biking, walking and transit plans. Durkan was clearly less enthusiastic about it than Moon, which is why Seattle Bike Blog endorsed Moon, but Durkan did not run a platform than she would all but stop the bike plan the way she did.

“I support a basic bike network,” Durkan said in response to a Seattle Bike Blog questionnaire during the campaign. “A safe and connected network is essential. I will work with city departments, key partners, and stakeholders to explore how to best implement the Bicycle Master Plan and the Center City Bicycle Network to accomplish this. I am supportive of a basic bike system to make cycling safe, accessible, and low-stress, especially for beginner or casual bicyclists as quickly and meaningfully as possible.”

She lied. In her first year in office, Durkan delivered just 4% of the bike lanes planned for that year. Her bike lane cuts and delays led to multiple protests within and outside of City Hall, and eventually she changed her tune and started building some bike lane projects in 2019. But it was too late. She had a wonderful window to get a lot done in the first half of her term, and she blew it.

So as ballots head to mailboxes around the city, I urge you to think about which candidate seems most able to fulfill the duties required to make the 2024 levy both bold and successful. We’ll have more primary election coverage coming soon, so stay tuned.

This entry was posted in news and tagged 2021 primary, move seattle. Bookmark the permalink.