MAJOR UPDATE: After posting yesterday and sending a question to FlixBus, the company announced that “ALL FlixBuses operating in the PNW are planned to have 🚲 racks available beginning July 14th!”

This is big news. FlixBus operates lines all over Washington and Oregon (and maybe to British Columbia when Canadian travel reopens?), even going places that BoltBus did not. Like Ellensburg, Spokane, Leavenworth and Wenatchee. For example, I can imagine FlixBusing to Ellensburg, then biking back to Seattle via the Palouse to Cascades Trail and camping along the way. This opens a lot of new opportunities for bike adventures.

You have to register a spot for your bike when you buy your ticket. No spots are available on the website yet, but hopefully that will change in the next few weeks.

Hello, @seabikeblog, @seattletimes– we're thrilled to announce that ALL FlixBuses operating in the PNW are planned to have 🚲 racks available beginning July 14th!

(Be certain to indicate your bike during the booking process as it must be booked in advance of travel.) 💚🚵‍♀️🚵‍♂️💚 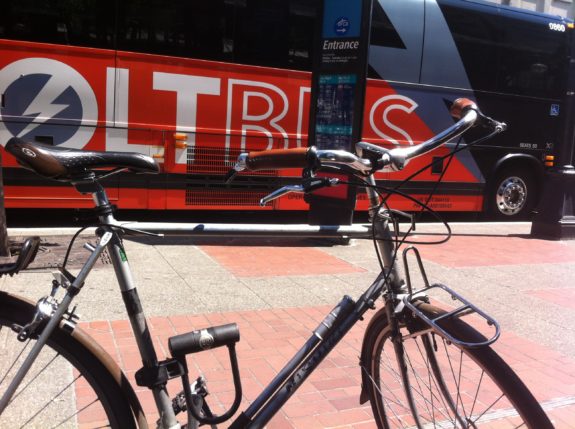 This old bike didn’t mind being shoved into the baggage compartment.

BoltBus was wonderful for three reasons: It was cheap. It ran multiple times a day. And they would let you shove your bike in the baggage compartment for free.

The bus service, owned by Greyhound, is apparently shutting down all its service across the continent, the Seattle Times reports. The official website says, “Effective 6/7/21 the BoltBus services are currently being operated by Greyhound in most markets while we undergo a few renovations.” But the Times reports that “Greyhound Lines, its parent company, has scuttled the BoltBus brand and has no plans to get it going again.”

As just a bus service, it wasn’t too remarkable. Greyhound, Amtrak and FlixBus also travel to many of the same destinations. But its lax attitude about bringing bicycles is what made it an amazing way to travel between major Pacific Northwest cities on a very low budget. So not only did you save some bucks on transporting a bike, but you also didn’t have to pay for transportation when you got there.

The Amtrak Cascades is still the best way to travel with your bike in the Pacific Northwest. They have bike storage in their baggage car, and you just have to pay a fee to reserve one of the spots. But the train schedule is limited, and tickets are a bit more expensive.

If you want to bring a bike on a Greyhound bus, they make you box it up and charge you a significant oversize baggage fee. The hassle plus the fee essentially make it impractical to bring your bike on the Greyhound, especially if your plan was to bike to the bus, then hop on your bike to get around your destination. Bike boxes are big and unwieldy, and many people don’t know how to disassemble and reassemble their bikes quickly on a downtown sidewalk. It’s an impractical limitation that essentially makes Greyhound buses off-limits for bike travel unless it’s truly the only option.

You can also take FlixBus, a service that sounds a lot like Boltbus and that even has an option you can check to bring a bike. The problem is that no trips seem to have an open bike space (suggesting that the Seattle-based buses don’t actually have bike racks). Former Mayor Mike McGinn and I had a Twitter exchange with FlixBus in 2019, and the company said it hoped to install bike racks on the Seattle-based buses in early 2020. But then, you know, some things happened that may have sidelined that work. Hopefully Flixbus does add those bike racks to the Seattle routes, because then it could be a great option. And since they also go to Ellensburg and Spokane, there are even more opportunities for FlixBus bike adventures.

But there was something great about just shoving your bike into the baggage area of a Boltbus. Sure, it was hardly the tender loving care many might prefer, but there was no extra fee and no need to reserve a spot. Just bike up, shove it in, and go. Then straighten out your bent fender when you get to your destination, and bike away. Sometimes you just don’t need to overthink these things.

Do you have a favorite way to travel to other big Pacific Northwest cities with a bike? Let us know in the comments below.

This entry was posted in news and tagged amtrak cascades, boltbus, flixbus. Bookmark the permalink.