Bike Everywhere Day is Friday! It may be reduced in scale, but still a great excuse to get up early to ride 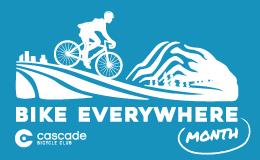 There’s no rally downtown, no after-party in Ballard and only a fraction of the community-created “celebration stations” in a typical year. But hey, Bike Everywhere Day 2021 is still an excuse to to ride your bike Friday, so it’s still a pretty good day. Biking is really fun.

There are six stations in Seattle plus a handful more around the region. The primary Cascade station will be near the Fremont Bridge as usual. So set an alarm to get out a little early to hit up some stations and say, “Hi!” to some friendly faces.

Here’s the official map of stations:

To build a network of support and fun for the thousands of cyclists on Bike Everywhere Day, Cascade Bicycle Club and our local partners host dozens of celebration stations along major bike routes in the region. We’ve provided our station hosts with suggestions on how to host no-contact stations and we encourage everyone to follow local public health guidance.

But hope for biking events is finally on the horizon. With vaccination rates climbing every day and closing in on half the county’s population (and more than half of eligible people), Cascade announced that 1,000 riders will be allowed at Flying Wheels June 5. That will make it “Washington’s biggest in-person cycling event in more than a year,” according to the Cascade Blog. There are still changes from a typical year (no day-of registration, no gathering at the start line, etc), but it’s a sign of change. Finally.

Y’all, COVID has been really hard. You are all amazing and wonderful for doing your part to get through this. We’re not out of it yet, but it’s coming (at least it seems that way).

1 Response to Bike Everywhere Day is Friday! It may be reduced in scale, but still a great excuse to get up early to ride