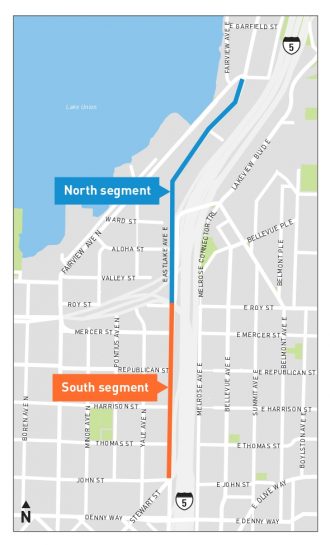 SDOT and King County Metro are getting ready to redesign a significant stretch of Eastlake Ave E from Stewart Street in South Lake Union (near REI) to Fairview Ave N in Eastlake. The changes will happen in two phases with work on the north phase from Fairview to Roy beginning this summer.

Construction on the north segment will be timed with reopening of the Fairview Ave N Bridge, which has been under construction since fall 2019. Since then, Eastlake Ave has been the construction detour route. So this work can’t really begin until Fairview is open, which is expected during the summer.

The north segment’s design will look something like this:

There will be bike lanes on both sides of the street as there are today. However, where there is on-street parking, the bike lane will be protected by the line of cars.

The big changes will come in 2022 when Metro’s layover project is complete and the south segment opens. That project includes all-new, sorely-needed bike lanes between Roy and Stewart Streets. And for most of the length, the bike lanes will be protected by either on-street parking or parked buses.

The biggest change will be at the south end of the Lakeview Boulevard Bridge over I-5. Here, the bike lane will hop up onto a new sidewalk separating the street from a new larger space for more bus layovers.

From the sidewalk, people headed northbound can choose to either go up Lakeview or continue down the hill on Eastlake.

Routing bike lanes onto sidewalks is never ideal. However, I’m not sure how many people will be walking on this sidewalk since it is next to a freeway and all the destinations are on the other side of the street.

A possibly easy fix (for several small issues) would be to install a crosswalk along the south side of the Roy Street intersection, which is oddly missing (it was included in early drawings from 2018). With a crosswalk there, anyone who walked down the east sidewalk of the Lakeview Bridge would be able to make a single-leg crossing to the west side of Eastlake Ave, where they are almost certainly trying to go. The current deign would force them to make a three-leg crossing (north across Lakeview, west across Eastlake, south across Roy) or walk a block south to Mercer.

But this is a quibble because this intersection design is massively better than the way things are now, especially for people walking. It squares up the intersection and removes a slip lane, a highway-style right turn lane that allows people driving to turn from northbound Eastlake to the Lakeview Bridge without slowing down. This type of design is very dangerous for people on foot especially, and the city has been working to remove them whenever possible. 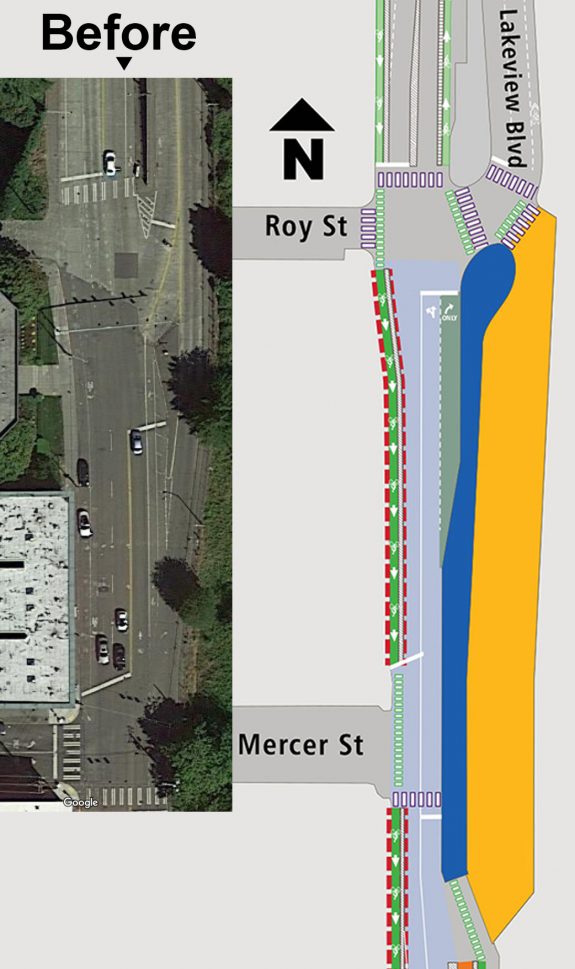 Below is the planned design from Metro as of March. The agency hopes to begin construction later this year and complete it in fall 2022.

7 Responses to Bike lanes coming to Eastlake Ave between Stewart and Fairview, work starts this summer