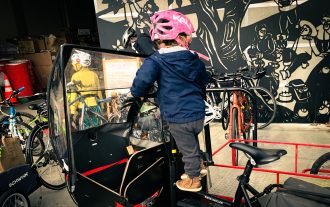 My assistant helped me make deliveries one week.

The Seattle Pedaling Relief Project (“SPRP”) started in the spring of 2020 as a way to help food banks deal with the sudden influx of people who needed to access their services at a time when COVID restrictions made it more difficult for people to get there.

The SPRP was initially designed as a “cargo bike powered crisis response group” partnering with existing mutual aid networks and community organizations to extend the reach of their delivery abilities. Basically, an organization would let SPRP know how many deliveries were needed, and the SPRP would organize people to get the work done by bike.

“My thinking was, ‘What if we did a Cranksgiving in reverse? And did it every week?,'” co-founder Maxwell Burton told me during a video interview back in July 2020. Cranksgiving is an annual ride Seattle Bike Blog has organized for more than a decade in which riders gather food from grocery stores and other food vendors to donate to food banks. Burton and co-founder Mike Lang’s idea was to have riders take the food from food banks and bike it back out into the community.

I have been volunteering for the PRP, and it’s a wonderful excuse to get out and bike around. You get to practice your navigation skills and your cargo-hauling skills, and all while helping fill in one of the more difficult parts of the food support system: Getting it to individuals and families.

A few months into operation, Cascade Bicycle Club hired Burton and supported the work of the PRP. With the stable source of funding and deep well of volunteer power, the PRP has since grown to work with seven food banks as well as a growing list of farmers’ market vendors and community gardens. The 500 volunteers not only made home deliveries, they also helped stock Little Free Pantries all around town.

Now as the project turns one year old, Cascade announced during its annual Bike Everywhere Breakfast that the PRP is becoming a permanent “cornerstone” program for the organization:

“This is bicycling with a purpose and a heart, and with a direct goal of helping neighbors who are struggling,” says Burton, who encourages people who bike to sign up at Cascade.org. “The Pedaling Relief Project is a way for people who bike to make a difference in their community, while also enjoying the exercise, fresh air, and camaraderie of bicycling for a good cause.”

“Everyone in the Cascade community should feel proud to be involved with this initiative,” says Board President Tamara Schmautz. “The Pedaling Relief Project represents a new chapter for Cascade Bicycle Club as we add to our bicycling advocacy, events, and education programming to find new ways for our members–and the entire bicycling community–to use their bikes for good.”

The added organizational support from Cascade will also enable the project to expand beyond Seattle. Similar efforts are already in the work in Spokane and Tacoma, and the organization will be putting together a tool kit to help more places get started.

The numbers (totals to date):