Person driving on wrong side of the road killed a man biking near Seward Park, police searching for suspect 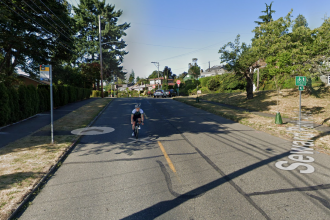 A person driving on the wrong side of the street struck and killed a man biking toward Seward Park Sunday evening, according to Seattle Police. The suspect then fled the scene.

The man killed was 63. Our condolences to his friends and family.

Police are searching for the suspect, who was driving “a silver, older model compact sedan with a shattered windshield.” The license plate may start with something like “BKU 053.” Anyone with a tip is encouraged to call SPD’s Violent Crimes Tip Line at 206.233.5000.

The victim was biking downhill (northbound) toward the park shortly before 7 p.m. when the suspect drove the wrong way up the northbound lane and struck him head-on, according to police.

This stretch of Seward Park Ave S is part of the very popular Lake Washington Loop bike route. It is a relatively low-traffic street the primarily serves homes and Seward Park itself. It also feeds into Lake Washington Boulevard, a section of which was closed to most cars starting last week. The Bicycle Master Plan calls for bike lanes on the street, but they have not yet been installed.

This section of road was also on Seattle Neighborhood Greenways’ map of proposed Stay Healthy Streets, though it was never implemented. Their idea called for the parking lane to be turned into a bikeway.

Was just thinking about this. It was also on @SNGreenways expansion proposal for Stay Healthy Streets, so I’m also feeling that wrenching of the fact we could have made this street safer, but we just didn’t https://t.co/GTfDN83lHd https://t.co/H4nwfP1oTT

From the SPD Blotter:

Detectives are searching for a driver who fled the scene of a fatality collision with a bicyclist near Seward Park on Sunday.

Just before 7:00 p.m., a bicyclist was traveling north on Seward Park Avenue South, east of Wilson Ave South. A motorist struck the bicyclist with their car head-on while traveling southbound in the northbound lane of Seward Park Avenue South. The driver fled the scene. Witnesses began administering CPR until Seattle Fire Department Medics arrived and took over treatment. Medics attempted life-saving measures on the way to the hospital, but the 63-year-old man was declared deceased upon arrival.

Detectives from the Traffic Collision Investigation Squad responded to the scene and are asking for the public’s help to find the suspect’s vehicle. Witnesses described the vehicle as a silver, older model compact sedan with a shattered windshield. The vehicle has a possible Washington State license plate with the first six characters, “BKU 053.” Anyone with information about this vehicle should call the Violent Crimes Tip Line: 206-233-5000.

9 Responses to Person driving on wrong side of the road killed a man biking near Seward Park, police searching for suspect