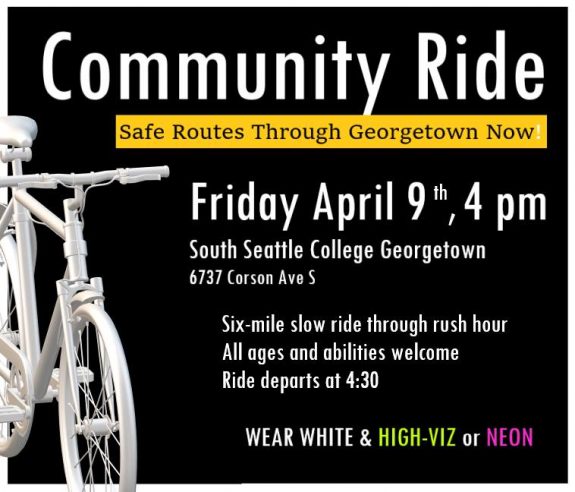 The death of a man biking in Georgetown in late March has shaken the community, so some neighbors are organizing a slow bike ride tomorrow (Friday) to mourn his death and call for safer streets.

“For years, our community has demanded safe routes within Georgetown, and safe access to SoDo, the Chinatown/International District, and Downtown for biking,” the event listing created by John Persak and Amy Amaryllis says. “The city has been slow to prioritize this infrastructure which people in most other parts of the city already enjoy. This must be addressed now.”

The ride meets 4 p.m. at South Seattle College’s Georgetown Campus near Corson Ave S and E Marginal Way. Organizer say the ride will go slow and is for all ages, traveling major streets in the neighborhood before ending near Counterbalance Brewing.

As we reported previously, a person driving a semi truck made a right turn from northbound Corson Ave S onto S Bailey Street, striking and killing the man. The collision occurred shortly before 5 p.m. March 24. Seattle Police are investigating, and no new details are available at this time.

Our condolences to his loved ones. If any friends or family members want to share his story, you can reach me at [email protected].

Details from the ride event page:

On March 24th, during PM peak traffic, a bicyclist was fatally hit by a large truck at the corner of S Michigan and Corson Ave S. in Georgetown. This is one of the most dangerous intersections in our neighborhood, where biking is a hazard for even the most experienced people. Heavy vehicles and heavy traffic are a substantial hazard in all of Georgetown, far beyond many parts of Seattle.

We will start at the South Seattle College Georgetown Campus and ride as a pack in rush-hour to highlight the dangers on our streets, including Corson, Michigan, Bailey, East Marginal, Ellis, and Airport Way. All ages and abilities are welcome.
We encourage all to wear white and/or neon high-vis gear for remembrance of the dead, and for visibility. We will end on 5th Ave S near Equinox and Counterbalance, around 5:30PM, for socially distanced social time, with a fire, snacks, and swag.

For years, our community has demanded safe routes within Georgetown, and safe access to SoDo, the C/ID, and Downtown for biking. The city has been slow to prioritize this infrastructure which people in most other parts of the city already enjoy. This must be addressed now.

Also: We need safe-keepers to keep the group together and manage any issues along the way. Let us know if you want to help lead!