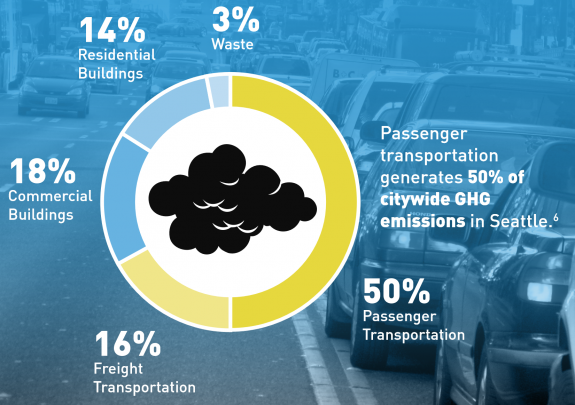 As Mayor Jenny Durkan’s frustrating and damaging time in office gets slowly closer to ending, it’s important that Seattle understands the ways her leadership (or lack thereof) harmed our city and many of its genuine movements for change. Because we cannot afford to elect another mayor like Durkan. So let’s look at her congestion pricing plan as one good illustration of many of the ways her leadership style is ineffective at best and harmful at worst.

In April 2018, Seattle’s new mayor Jenny Durkan made headlines by announcing that by the end of her first term (this year) she would launch a congestion pricing scheme to toll motor vehicles entering downtown. The announcement certainly turned heads, but not for the right reasons.

Congestion pricing can be a very effective tool to reduce driving while also raising funds to improve other transportation options like transit, walking and biking. Durkan’s tolling plan hoped to reduce the city’s total carbon emissions by 9% to 20%, and it was the centerpiece of her climate plan. Congestion pricing can be a very effective policy, and a handful of European cities and Singapore have enacted versions of the concept successfully. Durkan wanted Seattle to be the first city in the U.S. to do it.

The problem is that nobody was asking for it. I don’t mean that nobody in Seattle thinks it’s a good idea or has dreamed up concepts. Congestion pricing is one of those ideas that could be great, but it’s an enormous political undertaking. You have to pick your battles, and very few if any community organizations, including safe streets and environmental justice organizations, had been specifically advocating for congestion pricing. They hadn’t been doing all the community-building work that they know is necessary for a major idea like this to have community buy-in. There are a lot of questions about the potential inequities with such tolls, for example, so people and organizations that take equity seriously are not going to just jump on board with a plan they know nothing about just because the mayor announced it.

But to make matters worse, Mayor Durkan was quickly losing community trust. At the same time she was announcing her congestion pricing plan, she was delaying or cancelling many of the projects that people and organizations were actually asking for. In 2018, Mayor Durkan essentially cancelled Seattle’s bike lane program, for example. She built just 4% of the bike lanes planned for that year. I remember someone (I honestly don’t remember who) saying that complaints about delayed bike lanes were “thinking too small” because Durkan was going to do congestion pricing. But if she won’t even paint a bike lane, what on Earth made anyone think she would toll every motor vehicle entering downtown?

So it is absolutely no surprise to learn that her congestion pricing plan is officially dead. Of course it is. I personally never believed she was serious. It seemed like she just wanted to stand out to Mike Bloomberg, a plan that worked because he soon visited town and they went on a media tour together. Bloomberg was a proponent of congestion pricing in New York City in his time as mayor and had launched the American Cities Climate Challenge. Seattle “won” his challenge in 2018 in part by planning for congestion pricing. This does not feel like a coincidence.

Mayor Durkan cared more about what Michael Bloomberg wanted than what community organizations in her own city wanted.

As Durkan’s term continued, it became clear that she had no real concern for equity in city policy. For example, when she finally released a heavily-reduced bike plan, it downplayed nearly all of the south end projects that bike advocates had been very clearly requesting as their top priorities. It took an act of the City Council to make south end bike lanes a priority, an action that never should have been needed. But the City Council has had to get used to doing Durkan’s job for her.

People quickly realized that even if they support the concept of congestion pricing, Durkan was absolutely the wrong person to lead such a delicate program that needed a strong equity focus.

What’s frustrating is that congestion pricing could be good for Seattle. We need big and bold ideas to address big problems like climate change, improving transit, increasing equitable mobility, and making streets safer. But I worry that the idea of congestion pricing is now poisoned because people had to organize against Durkan’s half-assed, non-serious proposal.

“Multiple members, including ourselves, voiced concerns of the regressivity of congestion pricing towards workers, especially those who have been displaced and have to drive into downtown Seattle for work,” Jill Mangaliman told KUOW. Mangaliman is the executive director of Got Green, an important environmental justice organization in our community and the exact kind of organization we would want helping to craft such an effort. “Those from the [environmental justice] communities were in favor of having a more comprehensive transit system and progressive funding sources, instead of being punitive towards workers and communities priced out of the city.”

I don’t blame Got Green for having this response given Durkan’s track record on anti-poor policies like her cruel treatment of people living in encampments. But it sucks that now congestion pricing is considered “punitive towards workers and communities out of the city.” It doesn’t need to be that way, but Durkan sure wasn’t making a good case otherwise.

As the number of people running for mayor continues to grow, hopefully Seattle’s community organizations and candidates can all learn from Durkan’s mistakes here. She did not earn community trust before asking them to go out on a limb for her. She displayed a disdain or disinterest in their existing priorities, then proposed a major idea that relied heavily on their enthusiastic support in order to succeed. It was a failure of leadership from beginning to end, and I just hope that the lesson Seattle takes away from this is more about Durkan’s leadership than the promising idea that she dragged down with her.

This entry was posted in news and tagged congestion pricing, got green, jenny durkan. Bookmark the permalink.