What the transformation of Denny Way tells us about our city

Last week, five years after Capitol Hill’s light rail station opened, the construction fencing was finally removed on the long-planned public plaza that will complement the south entrance of the station next to Cal Anderson Park. It’s a truly great new gathering space for a neighborhood that’s always been short on park land, and it’s very much like an extension of Cal Anderson Park just opened. 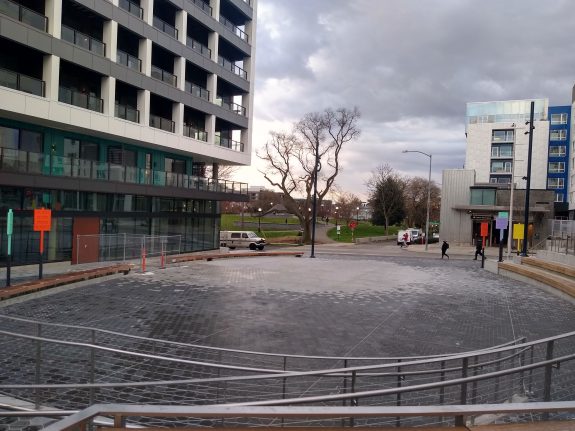 But the new public space was overshadowed: the plaza’s opening highlighted the fact that the redesigned stretch of Denny Way in front of the station is not functioning as it should. Despite the fact that this segment of street was closed for six years to construct the light rail station, it’s back to being a regular part of the street grid, albiet only one-way. And nothing was installed to prevent drivers from entering the public plaza, much less the pedestrian-oriented areas of the street itself. 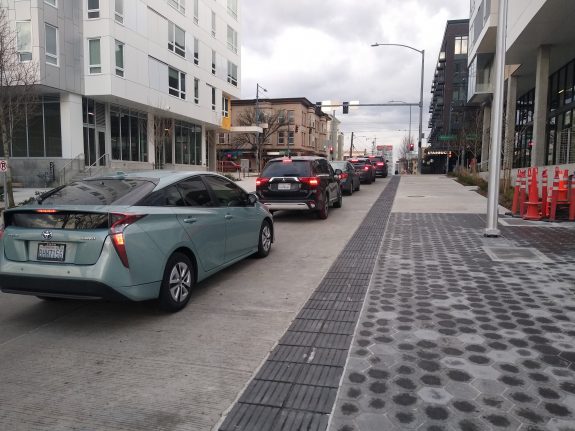 Brie Gyncild is one of the driving forces in the Capitol Hill Champion volunteer group, a joint project of the Capitol Hill Community Council and the Capitol Hill Chamber of Commerce that was devoted to achieving community goals for the development of the light rail station site. “Originally, the community vision was for that street to be a pedestrian-first street”, she told me. A permanent closure of the space to vehicles wasn’t ever on the table, but the design of the street was supposed to ensure that any vehicle traffic would be going very slow.

Indeed, the 2011 Urban Design Framework for Capitol Hill Station outline how the goals for the Denny Way festival street should include being “pedestrian and bicycle focused”, and having “limited access for local circulation and commercial load zones”. An illustration of the festival street concept from the same framework includes a notation to “consider planters and removable bollards to limit vehicle access”. In 2016 when the station opened, SDOT closed down the street when the National Association of City Transportation Officials (NACTO) was in town, for games of Scrabble, but almost exclusively in the years since the station opened Denny Way has been open to vehicle traffic. A festival street designation is not the same thing as a festival street design. 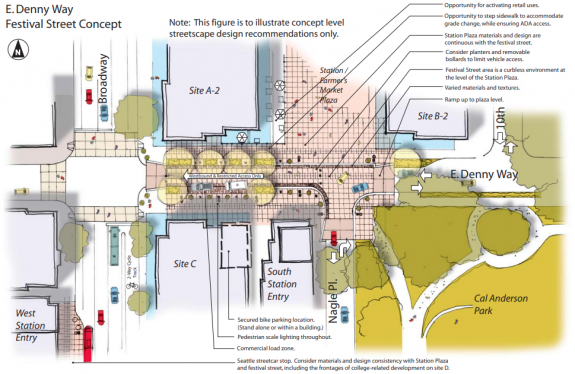 Central Capitol Hill, almost certainly with the help of the light rail station itself, has seen a remarkable 31% drop in the number of cars per resident in the past 10 years, per the Seattle Times. Here’s an instance where going the extra mile to make a block pedestrian and bicycle oriented will not cost us very much compared to any other option, and could have a reverberating effect throughout the neighborhood. Denny Way has long been envisioned as the location of a neighborhood greenway in a dense neighborhood with few east-west bike routes planned. Yet the greenway project has been delayed numerous times. In the center of the planned bike network for the area, vehicle access remains the priority. 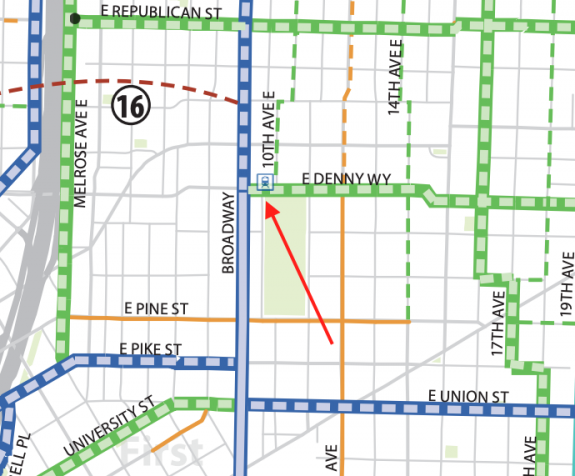 Central Capitol Hill as envisioned in the 2014 Bicycle Master Plan. Denny and Broadway rests at the center of the planned network. (Click to enlarge)

Denny Way is only one example, but there are countless other examples of prioritizing access for a limited few and sacrificing the benefits that could come from turning space for cars into space for people. The renderings of Pike and Pine Street between 1st and 2nd Aves planned as part of the Pike Pine Renaissance show another “shared street” with people walking across the roadway freely but without any barricades to prevent drivers from speeding through the space. We know if this was converted into another Occidental Avenue, with business and emergency access preserved, that it would become a beloved public space. And yet we won’t do it. 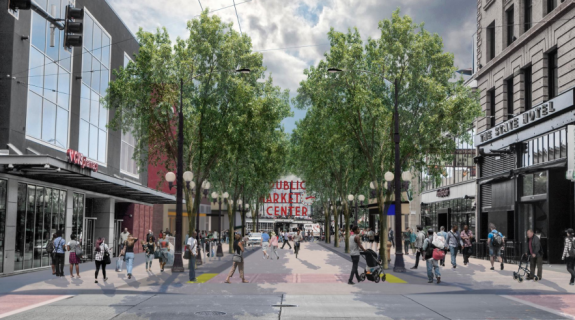 Concept drawing for Pike Street between 1st and 2nd Ave as part of the Pike Pine Renaissance Project.

In West Seattle, plans are moving forward for a pair of twin apartment buildings on a designated bike corridor, 36th Ave SW south of Fauntleroy. It’s not a major arterial, and yet the street concept that goes before the design review board in coordination with SDOT includes 20 feet of roadway space, and 23 feet of parking, including back-angle parking. The bike facility proposed as Seattle careens toward 2030 completely off track to hit its carbon reduction targets is…sharrows. Even the Southwest Design Review board is trying to push back on that, with its meeting report noting,”The Board noted the street improvements would still create a car centric street, with parking on both sides of the street and wide car travel lanes.”

The city’s new report outlining its ambitious transportation electrification goals generated headlines. Seattle has an entire department in Seattle City Light that is very invested in supporting the transition to more broad availability of electric vehicle infrastructure. But when it comes to making decisions that will support the necessity of the city as a whole to reduce the amount of vehicle miles that Seattle residents travel, on an institutional level Seattle is still sticking with the status quo.

Ryan Packer is Temporary Editor of Seattle Bike Blog.
View all posts by Ryan Packer →
This entry was posted in news and tagged pedestrian space. Bookmark the permalink.