Changes at Rainier and MLK coming in 2022, but what’s next for Accessible Mount Baker?

As the Seattle Department of Transportation moves ahead with designing a planned protected bike lane between Mount Baker light rail station and the planned Judkins Park light rail station on MLK Jr Way S, with the bike lane planned to be completed close to the station’s grand opening in 2023, we now know that pedestrian improvements at one of Seattle’s most dangerous intersections along that route are planned to go in next year.

Those improvements around Rainier Ave and MLK Way are the result of a small allocation of Move Seattle Levy dollars earmarked for Accessible Mount Baker. $6 million was reserved for “near-term improvements”, which in this case are coming during the sixth year of the levy. Two people were killed at this intersection in 2020, and one person was killed in 2019, pointing to a level of urgency at this spot. 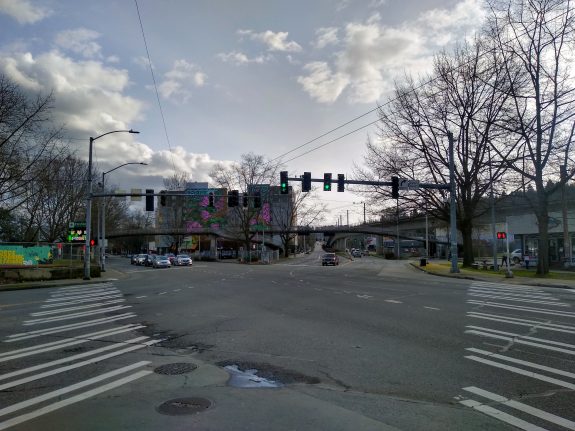 The biggest improvement planned is the installation of marked crosswalks along the two legs of the MLK/Rainier intersection where they are currently missing. The not-fully-accessible bike and pedestrian overpass will still be there, but crossing at-grade in any direction will become an option. Crosswalks will be wider, sidewalks extended in some areas and repaired in others. A no-right-on-red restriction will be added for vehicles turning from Rainier onto MLK northbound, which will protect people biking if it’s not counteracted by the street’s design. 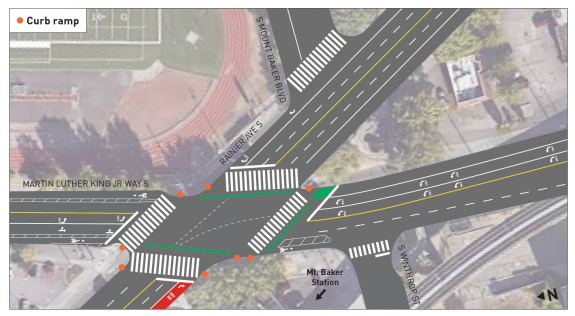 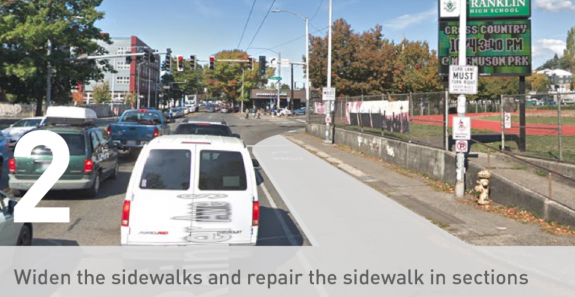 This intersection is going to be the south end of the protected bike lane on MLK when it’s complete in 2023 and the increased pedestrian space here will help people biking transition to where they want to go next. In the future, the bike lanes may continue south on MLK. Funding to study a possible extension to S Henderson Street was included in this year’s budget.

One possible near-term improvement that SDOT eliminated from contention was the conversion of the northern traffic lanes on Mount Baker boulevard to walk and bike space. With a wide boulevard median already in place this would have been a very cost-effective way to create more space for biking. This improvement was one aspect of the larger vision for Accessible Mount Baker, so maybe it can come back at some point.

Turning part of Mount Baker Boulevard into a walk bike lane was eliminated from the project last year.

So what’s next for the Accessible Mount Baker vision? The fate of the Mount Baker Transit Center will in large part determine the answer to that question, but even a concept study on its relocation is paused due to reduced revenue. SDOT”s Ethan Bergerson told me last week that it “still a priority to start again when we have more funding”.

SDOT is applying for a grant from the Puget Sound Regional Council to use toward the MLK Protected Bike Lane project. If that grant were to come through, that could free up more money for improvements here. But nickel and diming improvements here won’t achieve the larger vision for Accessible Mount Baker, which is really a placemaking project with a lot of beneficial transportation improvements included: making the car-oriented area around Mount Baker Station more pleasant for everyone. The $24 million price tag attached to the entire project in 2015 is surely much higher now but it looks like most of the vision will have to wait for the next transportation levy. 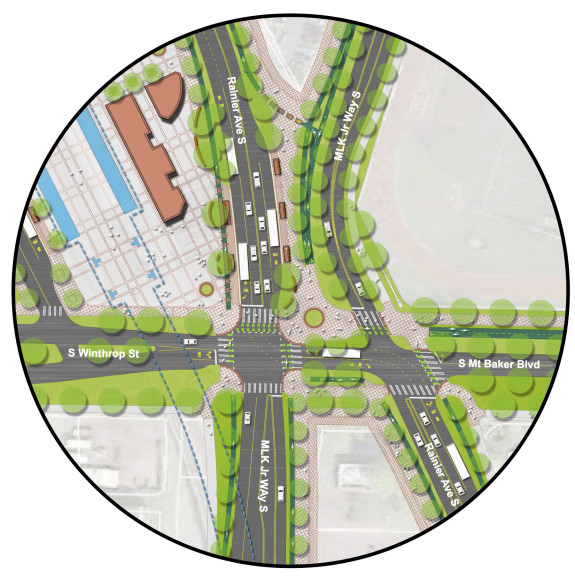 The Accessible Mount Baker concept: still game changing and just out of reach.

Seattle is embarking on an ambitious plan to build a lot of much-needed social housing around Mount Baker Station. Sound Transit land in the area can be combined with the UW Laundry site, now under City ownership, presenting a truly unique opportunity to create transit-oriented public housing in Seattle. These projects were not fully in view when Accessible Mount Baker was being developed, but they make the vision even more important to realize. 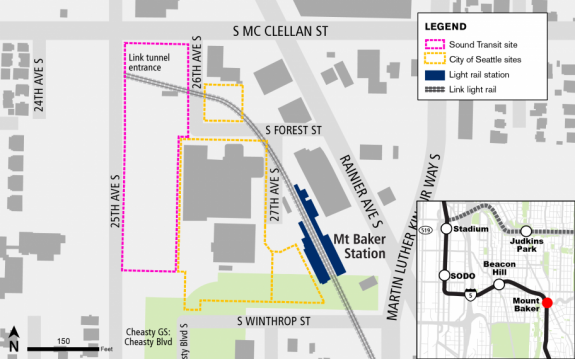 City owned properties that could see public housing under the plan moving forward.

The Office of Housing has a survey up through this Wednesday (March 3) on what your goals and priorities are for the sites eyed for redevelopment. If we get this right, it could be huge.

6 Responses to Changes at Rainier and MLK coming in 2022, but what’s next for Accessible Mount Baker?