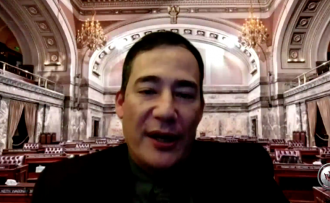 A week after the Washington House Democrats unveiled their proposed transportation package, which would fund bike, pedestrian, and transit programs at a level never before seen from the state, the chair of the state Senate’s transportation committee, Steve Hobbs, unveiled his counterproposal last week. This package is different than the one the committee’s vice-chair Rebecca Saldaña proposed before the start of the session. The Hobbs proposal would invest billions of dollars less in multimodal transportation than the House package and billions more in statewide highway expansion.

The Senate proposal also includes a line item that shouldn’t have seen the light of day: a special sales tax increase of 1% on bicycles. This ridiculous extra bike charge would raise a grand total of 0.1% of the revenue generated by the entire package over its 16-year life. Senator Hobbs has proposed this bike tax as part of his transportation package during the last two legislative sessions as well, but there hasn’t been enough momentum to pass it in recent years and no significant counterproposal. A “symbolic” bike tax has actually been kicking around the legislature for years, including a 2013 flat $25 bike tax proposal. This bike tax would be less than that previous versions on all bikes under $2500, but the exploding e-bike market means a lot of bikes that can serve as a car replacement exist above that price point.

Currently Washington State offers a sales tax exemption on up to $25,000 on the sale of a new electric car, in addition to tax credits offered by the Federal government. This has prompted Rep. Sharon Shewmake to propose a similar sales tax exemption for e-bikes. This would add an extra cost to the purchase price of all types of bikes. This is a blow bike shops do not need right now.

The bulk of the revenue raised for the package would come from either a carbon tax or a cap-and-trade proposal, both of which are being debated in other committees in the legislature right now. It would only raise the state’s gas tax by 6 cents (compared to 18 cents in the House proposal) and unlike the House proposal would not index the gas tax to keep up with inflation.

On the spending side, the package includes over $2 billion more in highway expansion projects, an amount that matches nearly exactly the reduction in multimodal transportation grants compared to the House proposal. It also invests $2 billion less in preserving and maintaining the state’s transportation infrastructure, kicking the can even further down the road and setting up more fights to secure more needed transportation funding later. 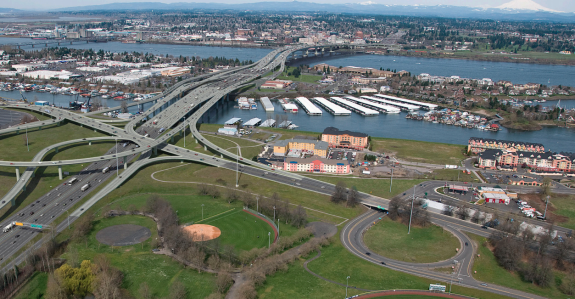 Columbia River Crossing project replacing I-5 between Washington and Oregon.

The highway expansion projects include many projects that have been on the wishlists of state legislators from all over, including $1.2 billion for the next iteration of the Columbia River Crossing, $1.4 billion for the Highway 2 trestle in Snohomish County, and dozens of other projects. While the Washington State Department of Transportation has explored prioritizing projects based on data like multimodal system development, this list comes straight from negotiations between lawmakers.

In the coming weeks we’ll likely see movement on the House proposal and more hearings on the Senate proposal. It’s nowhere near certain that there will be enough momentum to pass any transportation package this session, but all these negotiations set things up for the 2022 session as well.

Keeping track of the different transportation proposals in the air right now is hard; I’ve created a cheat sheet so you can easily compare the proposals and how different they are.

A cheat sheet on all three transportation package proposals. (Click to enlarge)

Ryan Packer is Temporary Editor of Seattle Bike Blog.
View all posts by Ryan Packer →
This entry was posted in news and tagged 2021 legislature, bike tax. Bookmark the permalink.