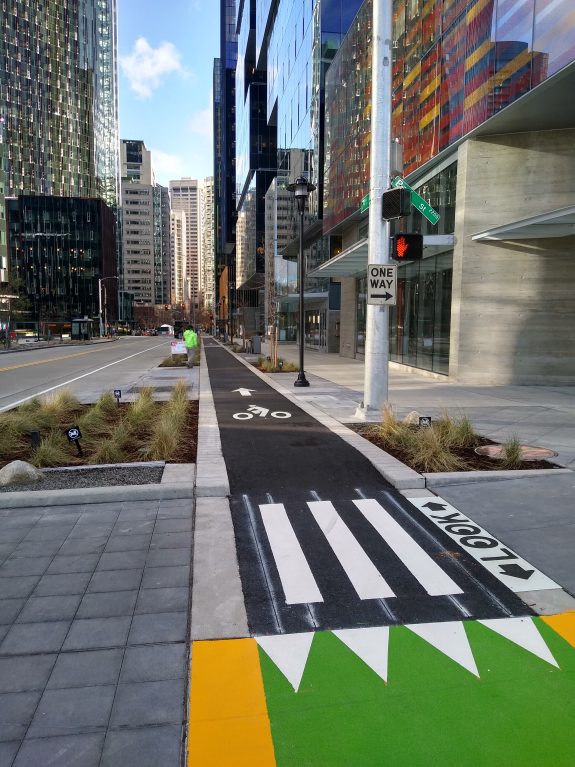 The latest block of sidewalk-level one way protected bike lane has opened on 7th Ave in the Denny Triangle, which means that bike lane now runs southbound all the way from Bell Street to Pike Street downtown. There’s also a northbound bike lane, running between Bell Street and Westlake Avenue, which has been open since the end of 2019.

This is the final block of bike lanes added in conjunction with new buildings in Amazon’s Denny Triangle campus expansion, most of which were installed as part of a public benefits agreement reached over permission to permanently develop the public alleyways on those same blocks.

But it’s not the final sidewalk-level PBL planned for 7th. Another building being developed by Onni north of Bell Street will also include a southbound bike lane. When that’s complete in a few years nearly the entire route between Denny Way and Pike will be grade-separated. 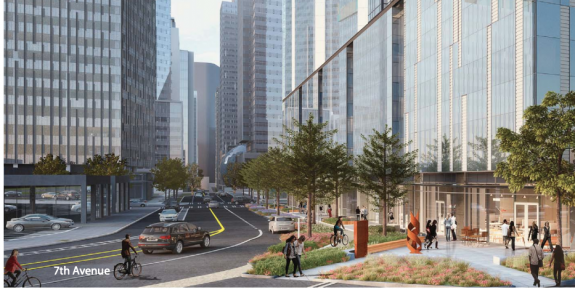 As for that northbound segment, it’s a bit disjointed. 8th Avenue is the northbound route that connects with downtown, but there are numerous places north of Westlake where it loses any protection from traffic and where drivers can enter and exit the bike lane to use the parking lane. But there’s no easy way to transfer from 8th at Westlake to the 7th Ave sidewalk level PBL. Riding on the sidewalk isn’t really an option. And so the protected facility remains a block away from where it needs to be. 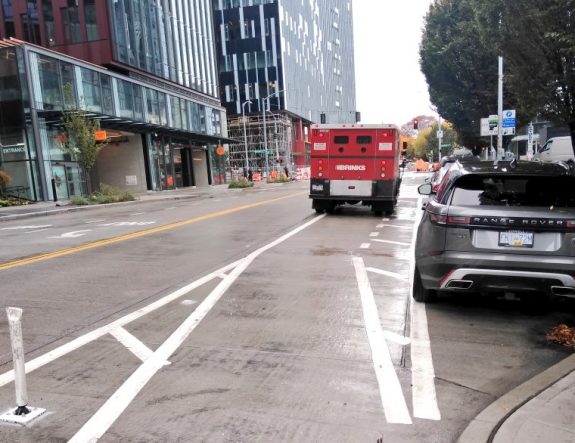 The protected bike lane on 8th Avenue stops being protected north of Westlake.

There are definitely strong feelings around the sidewalk-level bike lanes on 7th, which happened to open just as Amazon was trying out its Amazon Go convenience store concept, generating a lot of foot traffic that ended up spilling into the bike lane. While foot traffic has obviously decreased in the past year or so with most of the Amazon campus quiet, the design of the bike lane absolutely encourages slower travel than a street level lane, and doesn’t really encourage side-by-side riding.

Perhaps the best aspect of these bike lanes is that they have allowed the city to expand the all-ages network without using much direct city money. As more people begin to return to work downtown in 2021, having these in place will make a lot of people’s downtown trips more enjoyable. 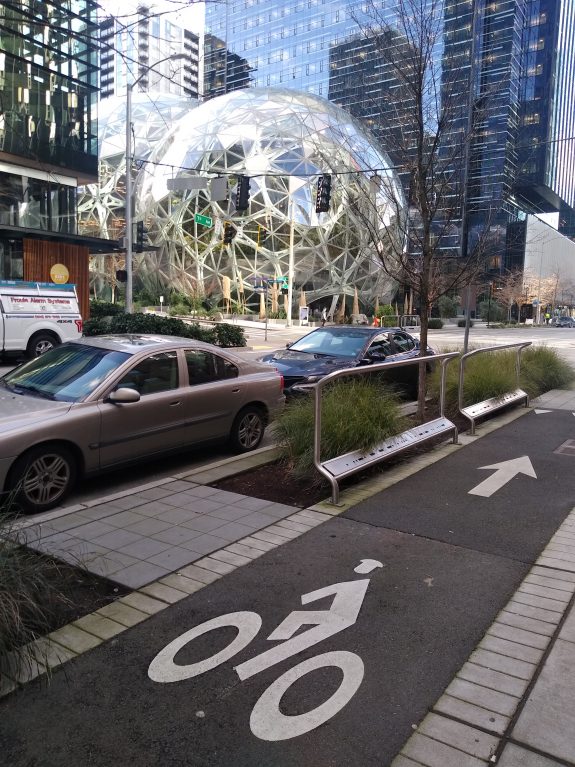 Ryan Packer is Temporary Editor of Seattle Bike Blog.
View all posts by Ryan Packer →
This entry was posted in news and tagged 7th Ave, amazon. Bookmark the permalink.