What 2021 means for Seattle’s bike network

2020 was a year of adjusting to new realities, and Seattle’s effort to meet its goals for expanding its bike network did not escape the curveballs that were thrown during the year. In response to a fundamental reshuffling of demand for right-of-way compared to other years, the Seattle Department of Transportation responded with a few new programs, namely Stay Healthy Streets, but mostly stayed the course even as Covid impacts on staffing delayed projects and Covid-induced budget cuts imperiled future ones. 4th Avenue finally has a protected bike lane, protected lanes on Bell Street were installed, and bike lanes on Avalon Way in West Seattle opened just as the West Seattle Bridge was closed in March.

Now that 2021 is here, we are looking forward to some of the projects that are planned for the year across the city that will improve conditions for people biking.

Construction has already started on the installation of this bike lane, which won’t extend north of King Street due to concerns about impacts on traffic, namely the First Hill Streetcar, which doesn’t operate in its own dedicated lane.

12th Ave will feature similar to bus stops to the ones that were installed along NE 65th Street, with bus riders exiting directly into the bike lane. The PBL will extend all the way across the bridge to the connection with the Mountains to Sound trail. A route running the entire length of Beacon Hill is currently planned for 2023.

This project was originally planed for 2020 but was delayed due to coordination with Metro on moving trolley wires. A big win for advocates, this bike lane was originally planned to disappear on either side of the busy intersection at 23rd Avenue but was redesigned earlier this year to bridge the gap. Though the protected bike lanes will not extend west of 14th Ave, the Madison RapidRide project, which SDOT says will start construction next year and take about 3 years, will connect the facility across 12th Ave.

Another 2020 holdover, this project will finally connect the Burke-Gilman at Stone Way with the Fremont bridge instead of that harrowing door zone lane. The project will also add a northbound protected bike lane just north of the bridge, making the transition from the cramped bridge deck a little more seamless. 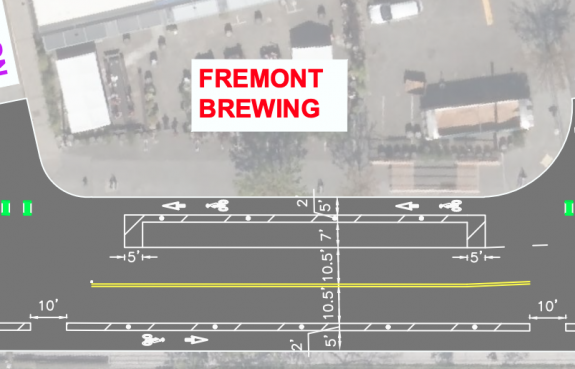 A segment of the new protected bike lanes coming to N 34th Street.

The first phase of the long-awaited Melrose Promenade project will get underway next year, with protected bike lanes getting installed on Melrose Ave E in far west Capitol Hill between Pine Street and Denny Way. Between Pike and Pine, one of the most obvious places in the city to turn into a pedestrian street, people on bikes will share the road with cars and a massive raised intersection will be installed in front of the Starbucks Roastery. North of Denny Way, SDOT will be installing speed humps in the style of a greenway. 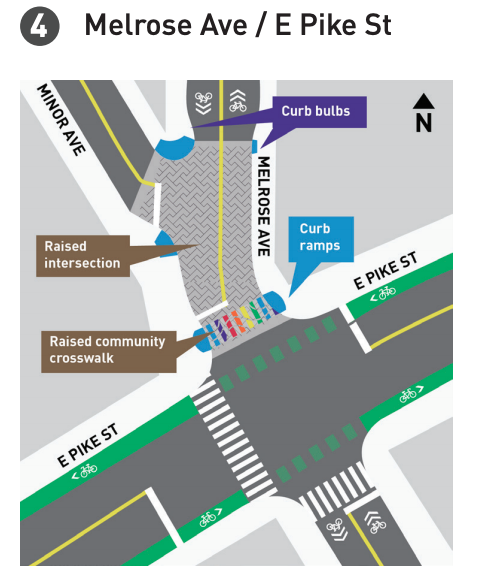 The raised intersection planned at Pike and Melrose.

With these bike lanes the North Seattle bike network will really start to fill in, with Ravenna Boulevard and NE 65th Street fully connected to north Wallingford.

The Durkan administration’s decision to eliminate bike lanes on N 40th Street that would have been installed while that street was being repaved is still disappointing. 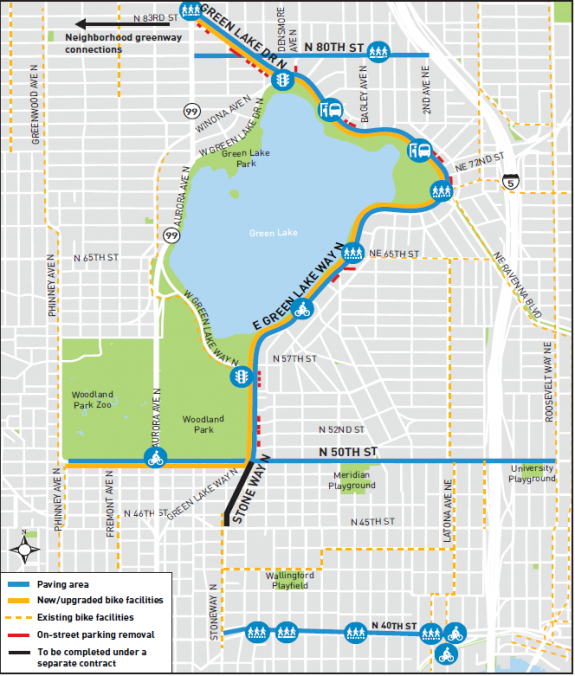 With the grand opening of the Northgate Link light rail extension in the fall, the bike and pedestrian bridge over I-5 will also be ready for traffic. This will open up a brand new connection at N 100th Street between the light rail station and North Seattle Community College. 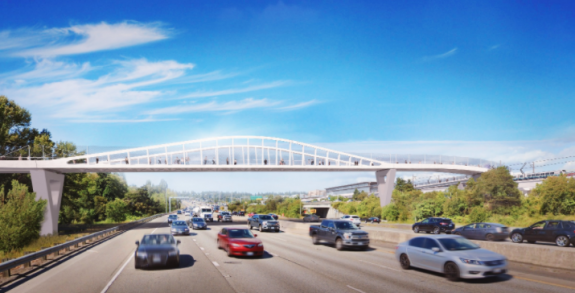 On the Northgate side of the bridge, separate bike facilities will connect NE 92nd Street all the way up to Northgate Way along 1st Ave NE. 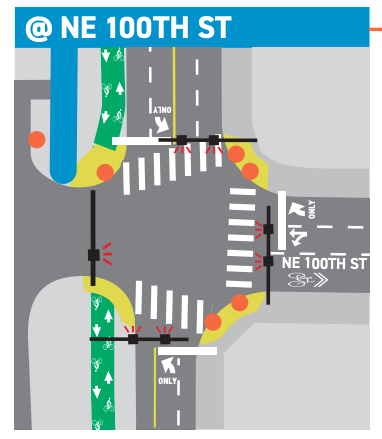 The bicycle improvements required as part of the agreement to renovate Key Arena into what will be Climate Pledge Arena are set to be installed by fall’s opening of the facility. The route will take several zigs and zags as riders heading to Uptown will take Broad Street onto 1st Avenue, continue onto 1st Ave N, and then have to take Thomas Street to Queen Anne Ave to continue north to Mercer. 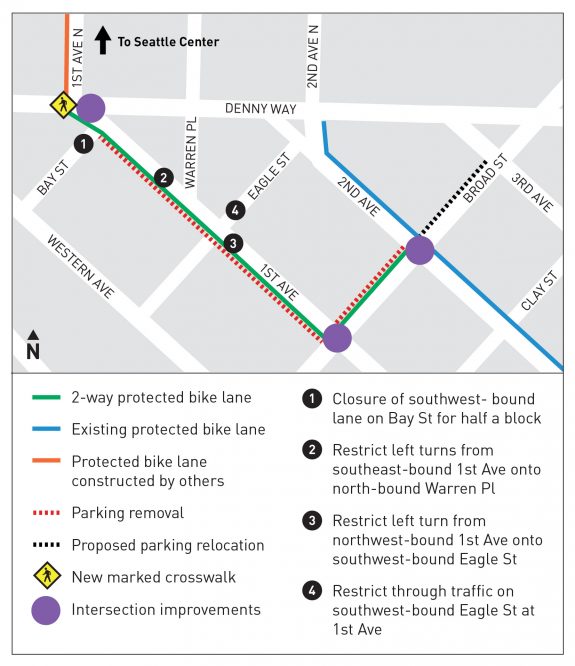 SDOT will come back and improve the 4th Avenue protected bike lane they installed in 2020 by extending the lane north to Vine Street, converting the entire corridor to a two-way facility, and extending it south to Yesler Way via the out-of-the-way Dilling Way. SDOT says they envision the lane eventually connecting south to Main Street but not until there are fewer buses using 4th Ave S. 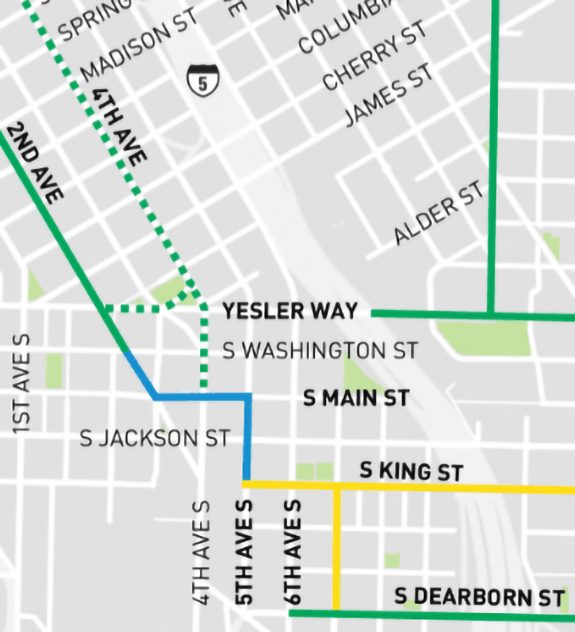 As part of a project to make more space for Metro buses to lay over in South Lake Union, SDOT will be reconfiguring Eastlake Ave E along I-5 south of the Lakeview overpass and adding protected bike lanes, although a short segment between Mercer and Roy Street will be a multiuse trail. An extension north to the bike lanes planned as part of the RapidRide J line will be coming later.

All of these projects are set to happen while a wide-open Mayor’s race takes place where transportation issues like the West Seattle bridge take center stage, and the two at-large councilmembers (two of the best on transportation) are also up for reelection. The only thing that’s certain is uncertainty.

Ryan Packer is Temporary Editor of Seattle Bike Blog.
View all posts by Ryan Packer →
This entry was posted in news and tagged 2021. Bookmark the permalink.

6 Responses to What 2021 means for Seattle’s bike network