Governor Jay Inslee has released his proposed two-year budget for July 2021 through June 2023 in advance of the legislative session starting in January. He has touted the budget as the “strongest environmental justice proposal in U.S. history”, and says that if approved it would put Washington on a path to reduce statewide emissions by 35% by 2030.

The centerpiece of the climate actions include a cleaner fuel standard, aligning us with Oregon and California’s standards, and a cap-and-invest program aimed at the state’s largest carbon polluters.

On the transportation side, the $6.2 billion transportation budget includes a proposed $724 for the state’s continued work to remove culverts blocking access to salmon habitat, and $190 million ($318M over four years) to continue converting the Washington state ferry fleet to hybrid electric. It also includes $15 million to electrify local transit systems, and $1.5 million for electric vehicle promotion and outreach.

It also includes a $20 million boost to the state’s grant program for Safe Routes to School programs as well as the Pedestrian and Bicyclist grant program. That will bring the total funding for both programs to just under $80 million, or 1.3% of the statewide transportation budget.

The local active transportation grant programs relative to the rest of WSDOT’s budget.

The highway management & facilities, highway improvements, and highway preservation programs make up 78% of the state’s transportation budget, or sixty-one times the amount allocated to those safety grants.

WSDOT has already submitted its list of projects it expected to be funded under both the Safe Routes to School and the Pedestrian and Bicyclist program for 2021-2023. Local agencies submitted over $189 million dollars’ worth of projects. Only 16 out of 107 projects were expected to be funded in the Pedestrian and Bicyclist program and 23 out of 125 in the Safe Routes to School program, leaving dozens of worthy projects with real safety impacts unfunded. With the funding boost from the governor’s budget, more will move forward.

With the additional boost in the governor’s budget, it looks like a neighborhood greenway along 135th Ave NE connecting the Olympic Hills greenway to the Cedar Park Elementary greenway is likely to receive the $620,000 that SDOT was hoping to be awarded.

That leaves dozens of projects that could make walking and biking to school easier and improve the ability to get around without a car in cities all across Washington. WSDOT includes a chart in their program update showing the historical availability of funding compared with the requests from local agencies. These are exactly the types of projects that should all receive full funding from the state department of transportation. 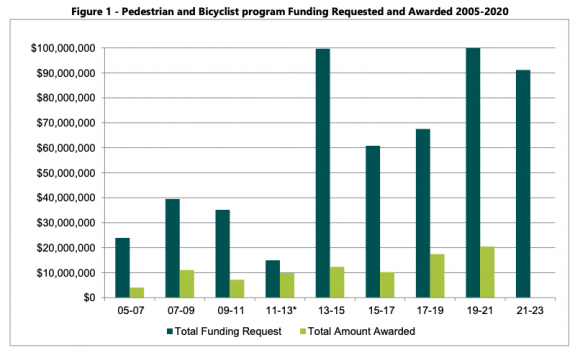 Meanwhile, the WSDOT “highway improvement” program is set to receive funding for expansion of I-5 at Joint Base Lewis-McChord of $101 million, more than the entire requests for funding in either grant program. There’s also $112 million to widen I-90 at Snoqualmie Pass, $533 million for the next phase of the Puget Sound Gateway highway expansion project, and $205 million for the next phase of the North Spokane Corridor highway expansion. Those projects have all been approved by the legislature in previous sessions- and that’s just the big ticket items. It’s likely the legislature will seek to add to that list in the upcoming session.

In October, the Washington Traffic Safety Commission received a presentation on WSDOT’s Safety Implementation Plan. The agency’s Target Zero goal is the same as Seattle’s- zero serious injuries or fatalities on Washington’s roadways by 2030- and the update for the safety commission was pretty blunt. “WSDOT failed to meet targets and did not make significant progress” said one slide, which included a chart showing how much Washington is off-track.

One reason Washington is not making progress on traffic safety is likely the fact that it continues to underfund these valuable safety programs that also happen to further the climate goals that Governor Inslee’s budget is centered around. The funding boost here is welcome, but it’s clearly not enough.