SDOT has just announced that it will be closing a small segment of Lake Washington Boulevard between Mount Baker Beach and Stan Sayres Boat Launch (at 45th Ave S) starting this Friday December 18 and running through Sunday January 4. This is the same segment of Lake Washington that was closed over Thanksgiving weekend, and is a shortened segment of the 3-mile Keep Moving street that SDOT piloted over the summer that extended all the way down to Seward Park.

Another small segment of the street between the boat launch and 50th Ave S is designated “local access” with signage but will still allow vehicles. 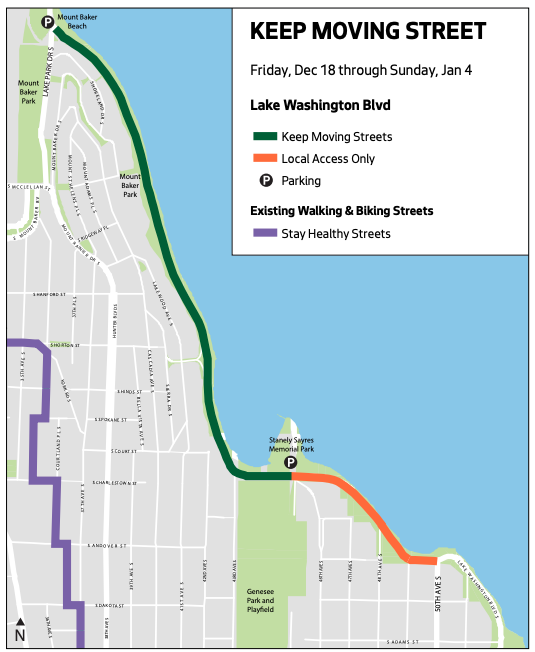 The segment of Lake Washington Boulevard closed to cars.

These temporary closures are clearly intended to provide extra open space around holidays but they also serve a transportation need in a segment of town without a reasonable safe north-south bike route. The narrow pedestrian path along Lake Washington boulevard is also inadequate for people who want to maintain six feet from other around them. Many are calling for at least a portion of the street to be made permanently car-free.

The city continues to have a protracted conversation about the future of Lake Washington Boulevard as a place where people that aren’t in personal vehicles are prioritized. Last week the parks board, which technically controls the land that the street is on, discussed the issue, and the Twitter thread from Erica C. Barnett is worth your time.

Lake Washington Blvd info signs are up. Creating space for people to walk and roll during the holidays: December 18- January 4. https://t.co/R2PFFwElrN pic.twitter.com/clJhdS9lJG