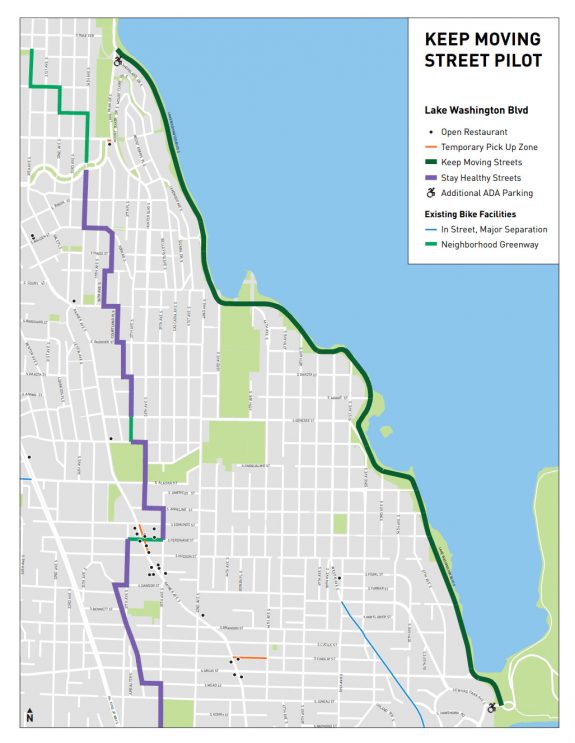 SDOT and Seattle Parks tested the concept of what they call a “Keep Moving Street” on the stories lakefront street for five days in late June. The street is marked as closed to cars, though people can still drive on it if they are accessing a home (whether they live there, are visiting someone or are making a delivery or service call). So it’s not entirely closed to cars, but cars are very limited. People are allowed to walk in the street, which helps limit overcrowding on the skinny sidewalks and paths along the lake.

The city collected feedback following the five-day test, and the response was very positive, according to an SDOT Blog post. More than two-thirds of respondents enjoyed the pilot, according to a non-scientific online survey.

Parking lots along the waterfront remain closed in an attempt by Seattle Parks to limit crowding in what would typically be one of the busiest summertime waterfronts in the city. This is where Seafair festivities are centered, after all. So closing the street helps to maintain that goal while also creating more open space for the people who do go there. Extra accessible parking has been added at both ends of the route, and the Seward Park parking lot is entirely dedicated to accessible parking.

How did the pilot go?

City staff studied travel habits and measured car and bike volumes before and after the June pilot, and it was successful by nearly every measure. Biking increased a lot, but not so much that overcrowding would become a problem, they found: 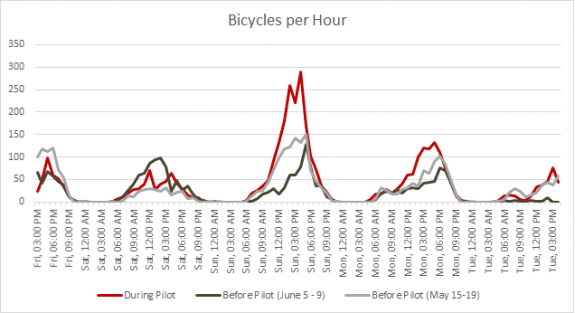 Meanwhile, driving was way down, suggesting that the vast majority of people were obeying the signs. “Vehicle volumes typically range from 53 to 440 per hour and dropped to zero to 10 per hour,” SDOT notes in their blog post.

The city also measure traffic levels on nearby streets to see if closing Lake Washington Boulevard would increase traffic on other streets. S Genesee St and Wilson Ave S both experienced decreases in traffic during the pilot. S McClellan St did experience an increase in weekday traffic compared to before the pilot, but traffic levels there were still far below the pre-outbreak levels. Weekend traffic on S McClellan St were down during the pilot.

“The counter on Wilson Ave S did not record weekend data before the pilot, so this data point is missing,” according to SDOT.

Though it may not at first make sense that nearby traffic would drop when closing Lake Washington Boulevard, this is likely for a couple reasons. Many of the those car trips on nearby streets would typically head to Lake Washington Boulevard. So with the street closed, those trips disappeared, too. And, of course, many people who would have driven to the waterfront instead took advantage of the Keep Moving Street pilot and walked or biked there instead.

The city did not have a quality method for counting pedestrian volumes. They did set up a counter to count people crossing Lake Washington Boulevard at one point near Genesee Park and noted a decrease during the pilot. But this is very likely because people simply walked in the street or crossed at a different point since there’s no need to seek out a designated crosswalk when the street is closed. That’s one of the many benefits from projects like this. Anecdotal evidence suggests that walking in the street was quite popular.

"It feels safe to walk here. I hope they'll keep it going this summer." — family enjoying a stroll along Lake Washington Blvd S, where the city has been running a 5-day "KeepMovingStreet" pilot: closed to regular car traffic, OPEN to walking, biking, skating, running, rolling … pic.twitter.com/Dm5QKn0rni