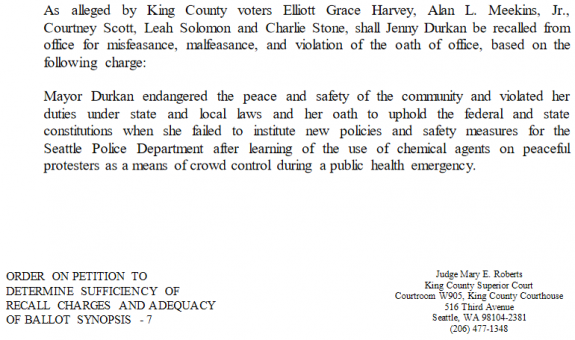 From the court decision (PDF).

Mayor Jenny Durkan has failed in her basic duty to protest the people of Seattle from a police force under her control. She has lost the confidence of the people, and continues to demonstrate that she is not the leader the city needs right now. A veto-proof majority of City Councilmembers (7 out of 9) has already taken action to make big governing decisions without her, a nearly unprecedented show of the Council’s lack of confidence in her leadership. And with news that a citizen-led recall effort has just cleared a major legal hurdle, it is even harder to justify why she remains in office.

Seattle Bike Blog called for her to resign a month ago, and her actions since then have not changed that stance.

The veto-proof Council block has already passed a progressive “boss tax” to help address budget shortfalls due to COVID and longstanding needs for affordability programs despite her lack of support. And now that veto-proof majority appears ready to cut the Seattle Police budget in half in response to the very clear demands of a huge, Black-led popular movement for justice and against police brutality. Mayor Durkan, on the other hand, spent eight days attacking the protest movement with explosives, chemicals and other forms of police violence. Those actions, particularly the mass use of respiratory irritants in the midst of a respiratory virus pandemic, are the core of the recall complaint against her.

But beyond that malfeasance, her actions make her uniquely unsuited to do the work facing the city right now. Seattle needs to close a massive budget hole, and reducing the extremely bloated SPD budget and funding alternatives to policing are going to be part of it. This is extremely difficult work, and it’s going to take a huge amount of research and outreach to get it done. And it’s going to involve working closely with many of the community leaders the mayor gassed for eight days. It’s not clear how she can restore the trust that went up in smoke along with the discharge from police weapons downtown and on Pine Street. We also need a mayor who will work with the overwhelming Council majority rather than fighting them every step of the way, making this huge task so much harder than it already is.

Governing by veto-proof Council majority is absurd and inefficient. Seattle’s government wasn’t set up for this. Rather, the assumption is that once a mayor has lost this much Council support, she would leave or be removed from office. If she won’t resign, then she is forcing people to do it for her either through a Council action or a recall.

The petitions are not yet ready for collection, but you can get involved in the recall campaign now by filling out the volunteer form and signing up for the email list.

As Seattle City Council Insight reports, Mayor Durkan still has an opportunity to appeal the court’s recall decision to the Washington Supreme Court. If it passes that hurdle, then petitioners would have 180 days to gather more than 55,099 valid, in-person signatures from Seattle registered voters (“twenty-five percent of the total number of votes cast [220,396] for all candidates for the office to which the officer whose recall is demanded was elected at the preceding election,” according to state law). Since signatures can be challenged, petitions typically need many more signatures than the legal requirement so that there is a buffer. This is an enormous and difficult task. And it might be tough to accomplish during the outbreak, since major events and bustling business districts are among the best opportunities for signature gathering in a typical year. But I guess we’re about to find out.

If enough signatures are certified, a recall election would be called within 90 days laying out the claim and the mayor’s response, then asking voters for a “yes” or “no” on recalling her. If that passes, then she is removed from office and the standard process for filling her position begins. Council President Lorena González would become mayor, and she would have about a week to decide if she wants the job or not. If she doesn’t, then the Council will vote for one of the other Councilmembers to become mayor. This is a rather raw deal for whoever ends up becoming mayor because they are forced to permanently resign their Council seat, which may still have years left. Voters will then elect both the mayor and the resigned Council seat during the next local or state general election. My non-lawyer reading of state law is that even if Mayor Durkan resigned today, it’s too late to hold an election in 2020 since primary elections are required for electing a mayor, and it’s too late to hold a mayoral primary (someone correct me if I’m wrong). If I’m reading this correctly, Seattle is voting for mayor in November 2021 no matter what. The question is who will be mayor until then?

Seattle Bike Blog has had issues with Mayor Durkan’s leadership before her crackdown on protests. But issues like delaying and cancelling bike lanes were the kinds of things you consider in the next election, not cause for something so drastic as a recall. But the way she responded so violently toward protests for so many days in a row crossed a clear line. She sent city police to use dangerous chemicals and explosives to attack crowds of people demanding justice and an end to police violence. There’s no coming back from that.