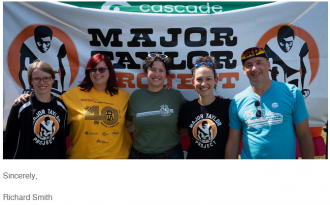 Smith (right), from his farewell letter.

The news comes as the sister organizations are operating with half their usual staff and cancelled nearly all their major events this year due to the outbreak.

Before Smith joined as ED in September 2017, the organizations went nine months without an ED, choosing instead to have top-level staff lead together. This time, Technology Manager Christopher Shainin will serve as Interim ED while the Board and leadership staff develop a new strategic plan and conduct a search for a new ED. That process is expected to take six to eight months.

Shainin is currently the Governance Chair of Inspire Washington and has a long history of holding non-profit leadership roles. He will lead the club through a very unusual period in their 50-year history. This will be the first year without the Seattle to Portland Classic since the initial 1979 event that launched Cascade Bicycle Club (though the second event was altered by the eruption of Mount St. Helens).

Below is Smith’s letter announcing his departure, effective last Friday:

Cascade Bicycle Club is celebrating 50 years this year.  We are also re-imagining our role in the Community with a fresh Vision, Mission and Values and we exited 2019 with the strongest team and best financial position in years, a supportive Board, and a wonderful community of Partners, Donors, and Volunteers.

Though COVID-19 has drastically changed the world as we know it, we made some very tough decisions in March that included furloughing staff and cutting expenses. These decisions will give us the ability to retool our work and deliver on Cascade’s mission. I am confident that Cascade will survive this pandemic and come out stronger than ever.

The time I have spent at Cascade has been incredibly fulfilling, both personally and professionally, and the relationships I have developed have been enriching.  I am proud of our many achievements during this time:

I have immense confidence in the Board and Leadership Team. Our transition plan is in place to ensure continuity and stability, including assigning current Technology Manager Christopher Shainin as interim Executive Director who will apply his 20+ years of experience leading various local nonprofits to the next stage of strategic planning.

Cascade Bicycle Club and Washington Bikes will continue to grow with the support of the broad community.  I want to thank everyone involved for their hard work and dedication to ‘improving lives through bicycling’.