Biking during the pandemic 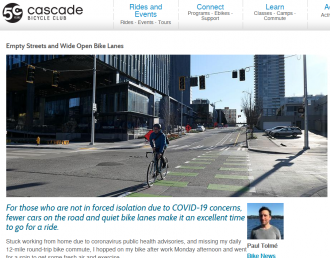 With the announcement that Seattle Public School will close for at least two weeks and gatherings of 250 people of more have been banned, our region has reached a new level in its social distancing efforts. Events venues have been shuttered, and many businesses are voluntarily shutting their doors. Bike Works, for example, is closed until March 29 and Cascade Bicycle Club’s annual Seattle Bike Swap has been postponed from March 22 to June 14.

The pandemic has also shaken up how people get around. Though public health officials have not (yet) told people to avoid transit, people are clearly feeling uneasy about using it. But people do need to get around, and many people rely on transit.

New York City is encouraging people to walk or bike to get around, and that’s not bad advice for the Seattle region, either. In fact, biking might not just be good way to get around, it might also be one of the best ways to stay healthy and active when so much of the city is closed. After all, being sedentary is also not healthy for your body or your mind.

If you are thinking about biking to get around for the first time (or starting again after years off the bike), you may find that much of the city is much easier to access by bike than you expect. This is especially true of downtown where the city has nearly completed a fully-separated bike route from Lake Union Park (and the Fremont Bridge) to the International District. You will also likely find that traffic is much lighter than usual thanks to so many people working from home. That’s what Cascade Bicycle Club’s Paul Tolmé found one recent evening rush hour downtown.

One possible complication to biking now is that some bike shops may follow Bike Works’ lead and close. No bike shop (except maybe REI) is anywhere close to reaching the 250-person limit health departments have imposed, but that doesn’t mean they will stay open.

Years ago, we published a “How to bike in the Seattle rain” guide, and that may be useful to any fair-weather riders out there. But this is probably a good time to put together a more general “how to start biking” guide. What questions do you think are important to include in such a guide? If you are just getting started, what questions do you have? Ask in the comments below or email me at [email protected]. I’ll not only try to answer it, but your question will also help me put together a more useful guide for others.

This might also be a good time to share some great just-for-fun bike rides for those who are feeling antsy at home. What are your favorite resources or methods for finding a good recreational ride? Let me know.

9 Responses to Biking during the pandemic