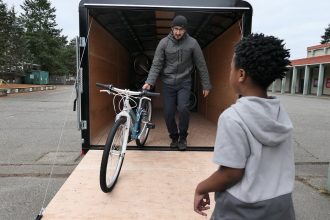 Nearly all Seattle elementary schoolers already go through the Let’s Go Bicycle and Pedstrian Safety program as part of their physical education. But now the program is expanding to include middle schools, as well.

The course, offered by Cascade Bicycle Club and Outdoors For All, will reach 40,000 students per year, doubling the number of students reached by the existing 3rd through 5th grade programs. That’s pretty great.

Students in the Let’s Go program “not only learn how to safely navigate their neighborhoods and get to and from school by bike, they also gain the confidence to hopefully become lifelong bike riders or transit users,” said Cascade Education Director Rachel Osias in the organization’s press release about the program’s expansion.

Funding comes from Seattle Public Schools and the Seattle Department of Transportation. And, of course, donations to Cascade support their programming.

Approximately 40,000 Seattle elementary and middle school students will receive bicycle and pedestrian safety training annually thanks to a major expansion of the Let’s Go Bicycle and Pedestrian Safety curriculum offered through a partnership with Seattle Public Schools and Cascade Bicycle Club.

Let’s Go is now offered to about 20,000 Seattle elementary schoolers in third through fifth grades. That number will double to approximately 40,000 once the curriculum is fully rolled out at middle schools district-wide in 2021 and 2022–making Seattle’s program one of the nation’s largest public school-based bicycle safety initiatives.

The middle school expansion has begun at four middle schools as part of a pilot project kicked off on February 10.

“This expansion of Let’s Go gives even more kids the chance to learn how fun and empowering bikes can be,” said Cascade Education Director Rachel Osias. “They not only learn how to safely navigate their neighborhoods and get to and from school by bike, they also gain the confidence to hopefully become lifelong bike riders or transit users.”

Cascade delivered the first trailer of 30 bicycles on Feb. 10 to middle schoolers at Broadview-Thomson K-8, where physical education teacher Brad Thornock eagerly accepted the bikes and helped unload them with the help of his students. “I’m so excited,” said Thornock, “and the kids are even more excited than I am.”

Cascade provides the bicycles, helmets and training materials for Let’s Go under a contract with Seattle Public Schools, with major funding from the Seattle Department of Transportation. Cascade trains physical education teachers to provide the curriculum, which was designed with input from educators, transportation professionals, and a range of experts. The elementary school program lasts three weeks; the middle school program two.

The goal of Let’s Go is to give all children–regardless of their socioeconomic status or physical abilities—the opportunity to experience the joy, freedom, and health benefits of bicycling, while also providing them with the knowledge and skills to safely pedal and walk their neighborhoods.

In addition to the physical fundamentals of balancing, steering, pedaling, and stopping, Let’s Go teaches kids the rules of safe and courteous riding. Let’s Go also provides special training for children with disabilities by partnering with the Outdoors for All Foundation, a nonprofit that offers adaptive cycles with three or four wheels for children who need more stability, and hand-pedaled cycles for those with limited or no leg movement.

Cascade hopes that Let’s Go, which also includes walking lessons that instruct schoolchildren about how to safely travel their communities on foot, will provide the impetus for youngsters to make bicycling a lifelong passion. Let’s Go is also a step forward in addressing the climate crisis. Automobiles and transportation represent the largest source of greenhouse gas emissions in Washington and the United States. Teaching children how to get around by bike rather than relying on cars is a step toward reducing their lifetime carbon footprints.