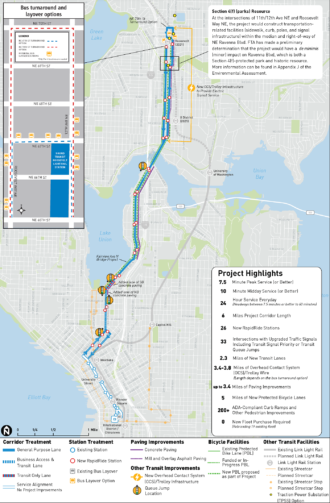 It’s hard to think of many potential bike lanes in Seattle as important and fundamentally game-changing as Eastlake Ave. I would probably put it at number two behind only Rainier Ave. There is no other viable option for a quality bike route along the east side of Lake Union between the University Bridge and South Lake Union.

Not only is the route today is one of the most dangerous for people biking, but it will also some day connect to the 520 Trail once the state completes their new connection between Montlake and I-5. So if you think Eastlake Ave is important today, just wait a decade when it becomes the most direct bike route between much of the Eastside and Seattle.

But bike lanes on Eastlake are not just about people biking through the neighborhood. They are also about opening up the neighborhood to customers on bike and providing more residents with a safe way to bike to and from their homes. And this is a chance to support local businesses and build more capacity for people to get there by bus and bike.

The Eastlake Ave remake is part of the larger RapidRide J project, which would include major bus priority improvements between downtown and Roosevelt. Because the project is due to receive significant Federal funding, it is currently undergoing a Federal environmental assessment (PDF). That’s where you come in. You can voice your support for the project, especially the Eastlake bike lanes, via this online comment form and by attending an open house or town hall meeting this week. The biggest meeting is likely to be Thursday’s 6 p.m. town hall at TOPS Elementary with Councilmember Alex Pedersen. From Share the Cities:

Show up to CM Alex Pedersen’s town hall at TOPS elementary school tell your personal story and connection to Eastlake and to show support for climate friendly changes and safety improvements in Eastlake that help all of us move throughout our city.

There are also drop-in open houses about the project all week:

Of course there is room for improvement in some areas, such as short sections of bike lane without a barrier or intersections that could use a higher level of protection. But the core of the Seattle/Federal preferred design is very good and worthy of support. We’ll do a block-by-block breakdown of the project in a future post.

The project would replace or improve sidewalks near the 23 new stations and would build 200 new curb ramps. Existing crosswalks along the whole route would also be “upgraded to current standards.”

The report notes that Fairview and Eastlake “experience some of the highest numbers of bicycle collisions in the corridor (40 between 2012 and 2017)” and that the project “would improve safety for all users by allowing for greater separation between bicyclists and motor vehicles/buses and reducing conflicts, providing greater predictability of people on bicycles and reducing the potential for conflicts at intersections.”

The project team conducted a ridiculously exhaustive, 100-page study of Eastlake bike route options (PDF). That’s 33 pages longer than the Seattle/Federal environmental assessment for the entire RapidRide J project. After all analyzing nine different options, the project team discovered that the preferred alternative is the best option because:

The report also cites Seattle’s new Bicycle Safety Ordinance, passed in September, noting that the bike lanes are consistent with the ordinance. If they were to remove the lanes, the ordinance would require the project to report to the Seattle City Council. But as it is, the bike lanes don’t require further Council approval. That ordinance is great, and here you can see how it flips the script and makes building the Bicycle Master Plan the logistically easier option for a project team by requiring extra Council process if they stray from the plan.

The bicycle facilities would serve the Project by providing access to the transit stations along the corridor, connect with existing bicycle facilities, and fill an existing gap in the regional bicycle network, thereby improving bicycle connections with the transit system. The PBLs would buffer the bicycle lane from the travel lanes and improve safety for bicyclists by separating them from other modes and removing them from mixed traffic. City Council Ordinance 125902 requires SDOT to construct PBLs that were identified in the Bicycle Master Plan whenever constructing a major paving project or alternatively provide a report to City Council if SDOT determines that the characteristics of the physical features or usage of a street, or financial constraints of full compliance, prevent the incorporation of PBLs with adequate directionality. The PBLs on Fairview Ave N, Eastlake Ave E, and 11th/12th Ave NE are consistent with the ordinance and therefore do not require reporting to the City Council.

There are currently between 4,271 and 4,589 on-street parking spaces along the whole RapidRide J projects, and the average use rate is between 72% and 85%. The preferred design would remove 471 to 699 spots (depending on peak-hour parking restrictions), which is about 11% of the parking along the route. However, the bulk of the parking removal (325 spaces) will be on Eastlake Ave where there is not room for safe bike lanes, bus priority and on-street parking. This is the biggest trade-off in the project, and will almost certainly be the focus of public debate, so let’s see what the report has to say about it:

During mid-day, on-street parking along Eastlake Ave E is well utilized with more than 90% of the on-street parking stalls on Eastlake Ave E in the Eastlake commercial district14 occupied. Additionally, approximately 25% of these vehicles parked on-street along Eastlake Ave E during the mid-day are for durations over 4 hours. Longer durations are assumed to be associated with employee or residential parking. An overnight study of parking in the Eastlake neighborhood had relatively low utilization on Eastlake Ave E (34%), likely because residents may not use available parking after businesses and restaurants close in the evenings and because of early morning parking restricted zones for the southbound curb lane.

This suggests something we saw during the Westlake remake and points to a potential solution for the business district: A lot of people are parking along Eastlake all day while they go to work, perhaps as a way to avoid paying high parking rates in South Lake Union and downtown. As a result, they are using parking that could otherwise be used for short-term stops into Eastlake businesses. It is not in Eastlake’s or the city’s best interests to use valuable road space as a commuter park and ride. So as parking spaces are removed, the city will look into converting more of the side street parking near the business district into short-term or paid parking. Expanding or modifying residential parking zones might also be part of the solution, allowing residents to park all-day while visitors are limited to 2 or 4 hours. And there are quite a few streets that limit parking to only one side of the street, so the city could allow parking on both sides where feasible.

Public street space is very valuable, and public parking near local businesses should be designed to support those businesses. That’s also part of the focus behind the bus, bike and walking improvements in this project: Helping everyone get there more easily and safely. Sometimes public debates about on-street parking acts as though parking is all that matters to local businesses, but that mindset erases the bulk of business district shoppers who get there by walking, biking and transit.

Though Seattle did not study Eastlake in particular, they did conduct customer intercept surveys in a number of business districts around town back in 2012. Basically, surveyors stopped people on the sidewalks outside stores and asked them how they got there. The two areas closest to Eastlake showed the vast majority of customers walked there. In Fremont, only 22% of customers drove while 86% walked, biked or took transit. On nearby Capitol Hill, the result was even more dramatic. In fact, more people biked there than drove alone:

Because these surveys were taken in 2012, they doesn’t capture the growth in ride-hailing services like Uber and Lyft. Likewise, it does not capture bike share.

The Eastlake bike lanes will support local businesses by finally making it safe for people to get there by bike. And unlike with on-street car parking, bike lanes provide a lot of headroom to grow. As more people bike, the potential for more customers also increases. And the transit improvements will increase capacity to move people along the street by 10% to 14%. Car parking, on the other hand, pretty much hits a hard customer ceiling once it is full.

Eastlake residents have long had among the highest bike commute rates in the city, with upwards of 7% of residents biking as their primary way of getting to work even nearly a decade ago (sadly, this 2013 Gene Balk piece is no longer functional on the Seattle Times website, though Curbed noted that Eastlake ranked fourth in the city for bike commuting. Yes, the 2010 Census data is getting very old, but we will have a much more granular look at commute habits by neighborhood when the 2020 data is released.).

So these bike lanes are not just about providing a high quality regional bike route connection, which they will, they are also about serving the many people who live in Eastlake and bike to get around.

Car travel time is expected to increase by about 2 minutes when the line first opens, but projections to 2040 suggest car travel times would actually be shorter than if the project was not built thanks to the reduced congestion as more people take the rapid transit line. Either way, full corridor car travel time should not be a project priority. Eastlake is right next to I-5, so people driving fully through the area should just go there. Providing spill-over capacity for people trying to shave a minute off their I-5 trip is bad for the neighborhood and should be discouraged at best or at least not a priority.

This entry was posted in news and tagged eastlake, rapidride j, roosevelt to downtown hct. Bookmark the permalink.