EDITOR’S NOTE: This story is by Emma Scher through our partnership with UW’s Community News Lab journalism course. 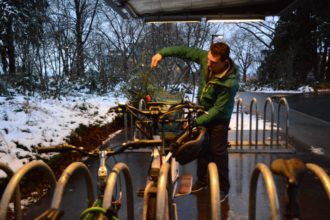 MBA student Vehro Titcomb unlocks his bike and prepares to commute from the University of Washington to pick up his three-year-old daughter from preschool. He was one of the many Seattle bicyclists who chose to commute through this week’s snowy weather conditions, an option that SDOT has recommended over driving. Photo by Emma Scher.

Heather Eliason wore spikes on her shoes to help her slow down and gain traction on the ice when she biked on snowy and icy Seattle streets in years past. Eliason used her bike as transportation around Seattle almost exclusively before moving to Germany last year. She also kept her tires deflated to increase traction when biking in winter weather and knows other Seattleites who have begun using studded tires.

“If it was too slushy or icy I’d go in the car lane and typically go in the middle. If you go too far to the right they will pass you too closely but if you go in the middle, they’re more likely to go completely around you,” she said.

This week’s snowy forecast doesn’t mean you need to stop biking to work, but locals and experts recommend using caution, bundling up, and buying appropriate gear to make your commute successful.

SDOT spokesperson Ethan Bergerson said to slow down, be cautious of lower visibility, and be aware that drivers may be navigating unfamiliar conditions. He also noted that as temperatures drop below freezing, black ice may be a cause of increased concern for both bikers and drivers.

“One of the biggest concerns over the next few days is going to be ice,” he said. “This morning we had a lot of bare and wet pavement which means that the roads and bike trails were wet but didn’t have snow accumulated on them, which is good for right now but when the weather drops below freezing black ice can be really dangerous.”

Bergerson recommends that commuters check the snow plow routes, since they prioritize plowing routes to hospitals and major transit routes. SDOT does have smaller snow plows to clear protected bike lanes, but has to wait until larger plows get to the roads before addressing the bike lanes, Bergerson said.

“Responding to snow events can be tough,” he said. “We can’t be everywhere at once. We’ve got a few small plows that will be in protected bike lanes, and we have to do it in that specific order.”

Lisa Enns, a West Seattle resident, said that her neighborhood hasn’t seen any snow yet, but she also dealt with slush accumulation in years past. She said that when she biked the Burke-Gilman bike trail in 2019, her morning commute when the powder was fresh was easy, but by the nighttime, the slush was so bad that she had to switch to main roads.

“I was trying to ride on the Burke-Gilman and it was so slushy and sloppy that it was physically difficult to get my bike through,” she said. “I ended up just hopping out on the road and caused the cars to pass, and it probably wasn’t super safe but it was much easier.”

Bergerman also noted that SDOT oftentimes can’t plow some neighborhood roads due to blocks like speed bumps and roundabouts that plows cannot navigate. Despite Seattle having its snowiest winter in a decade last year, the city still lacks rules that require residents to move their cars for snow plows, as is the case in some places on the East Coast.

Bill Brown, social media manager at Ride Bicycles Bike Shop on Roosevelt Way, said biking year-round is completely feasible if properly prepared. Before moving to Seattle from Chicago last year, he biked to work every day for eight or nine years. He stressed exercising caution in the snowy weather, especially in your speed when turning.

“Make sure you’re warm and comfortable. If you’re cold you’re gonna be a little more likely to be on edge and get in an accident. Make sure it’s all tuned up and your brakes are working well,” he said. “I think it’s a lot of fun to ride in the snow, just make sure you’re dressed appropriately.”

Seattle saw a significant spike in bike commuters between 2018 and 2019 during SDOT bike counts. The Fremont Bridge bike counter tallied over 1.1 million bikers in 2019. That’s an increase of more than 136,000 people from the year before, setting a new record.

SDOT said that it’s working to facilitate bike commutes; a statement released by SDOT on Monday even advised that Seattleites leave their cars at home and instead opt for biking, busing, or walking over driving, if possible. 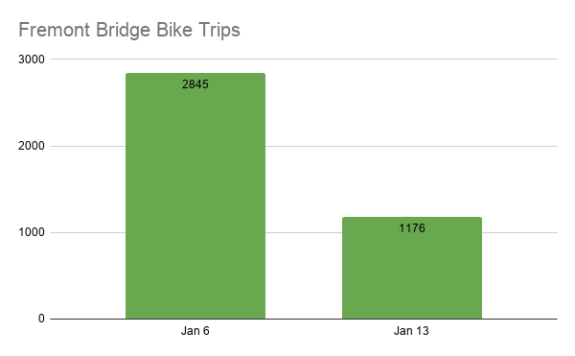 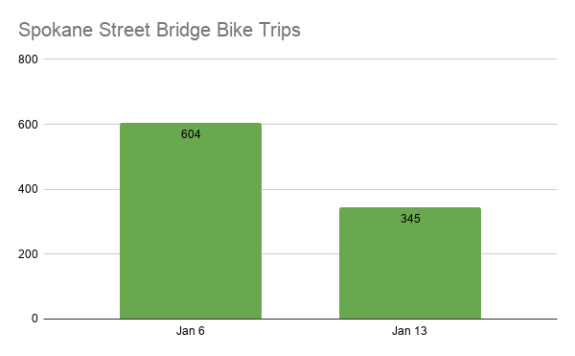 On Monday, about half as many bikers were out in the snow compared to the week prior when temperatures were in the 40s, according to city bike counters on the Fremont and Lower Spokane bridges.

You can check your route with SDOT’s snow response map, which indicates which roads have been treated and when, which roads are closed, where responses are planned, and where there have been roadway incidents.

“If anything, the hardcore biker that wants to bike in the snow, hats off to them,” Bergerson said. “But we want to do what we can to make that a safe option.”

Emma Scher is a senior journalism and Honors sociology student at the University of Washington, Seattle Campus. She has written for the Washington Newspaper Publishers Association's Olympia News Bureau, The Seattle Times, Seattle Metropolitan Magazine, and Awoko Newspaper in Freetown, Sierra Leone. You can find her on Twitter @emma_scherr.
View all posts by Emma Scher →
This entry was posted in news and tagged emma scher, ethan bergerson, heather eliason, lisa enns, snow. Bookmark the permalink.