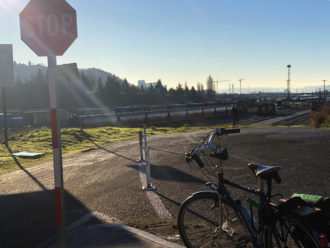 With voter approval of I-976 hanging over the 2020 state legislative session, there’s no doubt that funding will be the top priority for Washington Bikes this year. Even if courts strike down the law, which is very possible, there is a lot of political pressure on state leaders to enact some kind of transportation funding change anyway.

The stakes are big and largely unknown. What specific funding will be at risk? Biking and walking is a very small percentage of the state’s transportation budget, but that doesn’t mean it’s safe. From WA Bikes:

The state’s approach to filling the funding shortfall created by I-976 is still in flux, but one thing is clear: I-976 will require state legislators to make hard decisions this session in order to cover an anticipated and significant hole in the multimodal transportation account.

And state law also governs what kinds of revenue local governments and agencies can collect, so changes could impact SDOT, King County Metro and Sound Transit even if the lawsuit is successful. But beyond current budgets, Seattle and King County are both due to run Transportation Benefit District renewals this year, and state law outlines the revenue options for these vital packages. Seattle’s Transportation Benefit District currently relies heavily on vehicle license fees and largely funds transit service. At a time when we need to continue going big on transit service, walking and biking to continue growing our ridership, we need powerful options to offer voters. Our investments are working, we can’t go backwards now.

Washington Bikes is also following Oregon’s lead by supporting a law change to allow what they are calling the “safety stop.” Also known as the “Idaho stop,” since it has been legal in Washington’s neighbor since the early 1980s, the safety stop would allow people biking to treat stop signs like yield signs. So if the way is clear and you have the right of way, you will be legally allowed to roll through the stop. But if you do not have the right of way, like when someone in a car arrived at the intersection before you or when there is a person about to enter the crosswalk, you have to stop and wait your turn like normal.

After years of trying, Oregon finally passed the law last year. This video by Oregon’s Spencer Boomhower from more than a decade ago explains it pretty well, though obviously the specifics of the bill mentioned in the video are not accurate when talking about Washington’s proposed change:

Really, this law would legalize something that just about everyone riding a bike already does. It’s just impractical when biking to come to a full stop when you don’t need to, which is why so few people do it. So long as you are exercising care and yielding the right of way when required, it is perfectly safe to roll your stop signs. This law would not in any way allow people to just blow through intersections where others are waiting, which is sure to be something opponents cite as a concern. Details from WA Bikes:

The Safety Stop increases safety at intersections by allowing a person bicycling to avoid waiting in the blind spot of a motor vehicle and to get out ahead of following motor vehicles, creating space and less likelihood for interaction between them. Similar legislation has passed in Idaho, Delaware, Arkansas and most recently Oregon. Senator Andy Billig (6th LD, Spokane) [SB 6208] and Representative Joe Fitzgibbon (34th LD, Burien) [HB 2358] are the prime sponsors in the Senate and House.

Some versions of this law in other states go the next step by allowing people to treat red lights as stop signs, but WA Bikes did not suggest they are seeking red light changes in this law. WA does already have a “dead red” law on the books that allows someone on a bike or motorcycle to run a red light if the signal fails to detect them (often equipment tuned for cars won’t detect smaller vehicles), though that is quite different from this law.

WA Bikes will also “support legislation to include the concept of “health” in the state transportation system policy goals. This effort will ensure WSDOT considers health outcomes in future transportation investments.” Huh, it’s sure weird that health isn’t already included in these policies…

The annual WA Bikes lobby day is January 22. RSVP here if you want to join the effort to make sure legislators know people care about biking.

This entry was posted in news and tagged 2020 legislature, washington bikes. Bookmark the permalink.

6 Responses to Funding, legalizing the ‘safety stop’ on WA Bikes’ agenda in Olympia