Shortcut: Construction on the Northgate bike/walk bridge will begin next month

Editor’s Note: This post introduces a new type of post on Seattle Bike Blog I am calling a “shortcut.” Shortcuts could be many things, but they will all be short. They could be a quick link to a survey or advocacy alert. Maybe there’s a project update that doesn’t need much new reporting. Or maybe another news outlet has reported something I think you should all see. I am hoping that Shortcuts will be a way to get more news to you more quickly and create more prompts for comments and conversation, but in a way that differentiates these quick posts from my longer posts with more original reporting or commentary. So let me know what you think in the comments below. 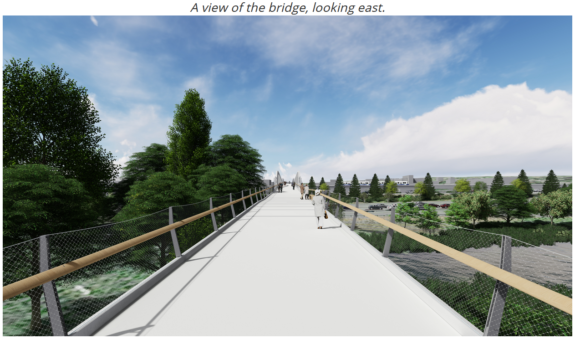 It’s really happening! Work is just weeks away from starting on the Northgate bike/walk bridge over I-5, and the goal is still to have it open by the time Northgate Station begins light rail service in September 2021. It’s a complicated project, so it could be cutting it close depending on construction delays.

The start of the project has already been delayed several times, including a major redesign after the original design’s bids came in much higher than budgeted. The trail will be 16 feet wide and connect the station to North Seattle College, dramatically increasing the number of homes west of I-5 within a short walk or bike ride of the new light rail station.

SDOT is hosting a series of open houses the second week of January for people who want to learn more about the project or project construction. Details from SDOT:

We’re excited to announce that construction will begin as soon as early 2020! To prepare for this next phase, we’re hosting three drop-in sessions in early January.

Attend a session to:

6 Responses to Shortcut: Construction on the Northgate bike/walk bridge will begin next month