I already wrote about how amazing the 2019 Seattle Cranksgiving was over the weekend, but this number is so big that I felt the need to give it its own post.

The 190 people who rode in Seattle’s 10th Cranksgiving all pitched in to purchase and pedal about 12 pounds of food each to donate to Rainier Valley Food Bank. And when you add the food in every rider’s backpacks and panniers together, you get a literal metric tonne. This is the weight of some small cars.

Nationwide, there were a record 109 Cranksgivings this year, which is just astounding. That’s a lot of people biking food for their communities.

There is so much power in people coming together. If many hands make light work, many hands on handlebars can replace a semi truck. And this event costs almost nothing to organize. The only cash that changes hands is between riders and the people selling groceries around town. And riders keep inviting more friends to join, resulting in consistent growth (with weather playing a factor year-to-year). 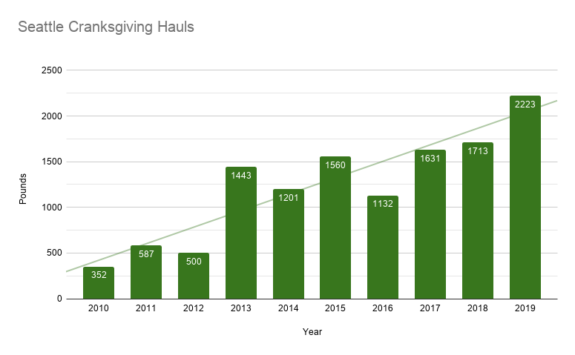 So big thank you to everyone who has ever ridden or sponsored the ride. And if you are inspired to start a Cranksgiving ride in your town or neighborhood, you should! Check out the how-to guide at cranksgiving.org to get started or email [email protected].

This entry was posted in news and tagged cranksgiving, cranksgiving 2019, video. Bookmark the permalink.