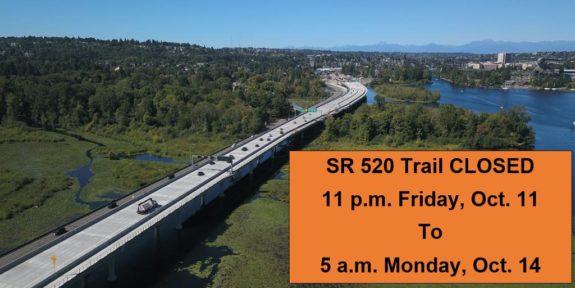 It’s happening! WSDOT is going to replace all those abruptly bumpy expansion gap covers on the 520 floating bridge trail this weekend.

Of course, replacing the covers means crews need to close the trail for the weekend starting 11 p.m. tonight (Friday) and continuing until 5 a.m. Monday. But the trail was going to need to be closed anyway due to work in Montlake, so combining the work this weekend prevents a closure later.

As we reported back in 2016 before the bridge trail fully opened and again in 2017, WSDOT installed expansion gap covers with a steep enough rise that biking over them feels something like hitting a pothole. And there are a lot of them.

Because the bridge is floating on Lake Washington, it is built to rise and fall with the level of the lake. That means the bridge needs a lot of gaps in the bridge surface, which are then covered for obvious reasons.

But hitting what feels like a pothole every few seconds while biking across the world’s longest floating bridge is a bit of a bummer. Luckily, I have not heard of anyone crashing and being injured due to the bumps, which I was worried would happen.

Nearly a year ago, WSDOT started testing out a fix to one of the covers, and the response was 95% positive. So now they are fixing the rest of the covers this weekend and it should be a smoother ride come Monday.

This entry was posted in news and tagged 520 trail, Bike Route Alert, wsdot. Bookmark the permalink.