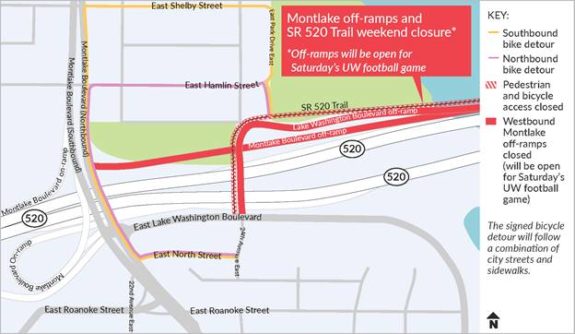 The 520 Bridge replacement project’s final set of projects kicks into high gear this weekend with a set of major closures in Montlake, including the 520 Bridge Trail and the 24th Ave E bridge.

To make matters worse, the ramp closures mean no westbound bus access to Montlake. So you might not even able to put your bike on the front of a bus on the Eastside and expect to get off at Montlake (there will be some access on Saturday for the Husky football game).

The 520 Bridge Trail is scheduled to reopen by 5 a.m. Monday morning to serve the morning commute. 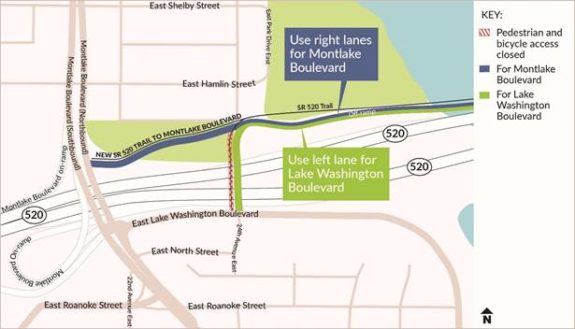 Starting Monday, trail users will connect to the east sidewalk of Montlake Boulevard if headed south.

Unfortunately, the 24th Ave E bridge will close to bikes permanently. You’ll have find your way to Montlake Blvd to head south. WSDOT will open a new trail connection to the east sidewalk of Montlake Blvd “in the coming weeks” for folks heading south. From there you can either turn down E North Street (again, Seattle, with the confusing street names…) to 24th Ave E and the Lake Washington Loop bike route.

WSDOT announced via Twitter that relief is coming “later this year,” though they do not have a more specific date. After eastbound traffic is re-routed via a temporary ramp, the trail will also get a temporary crossing. So stay tuned for details about that when we get them.

🚲🚲🚲Attention cyclists! Friendly reminder that the 24th Ave E overpass will close at 11 p.m. on 9/13. Later this year, a temporary trail will be built to connect the SR 520 Trail directly to E Lake Washington Blvd during Montlake Project construction🚲🚲🚲

Founder and Editor of Seattle Bike Blog.
View all posts by Tom Fucoloro →
This entry was posted in news and tagged montlake, sr 520. Bookmark the permalink.

14 Responses to 520 construction in Montlake will close cross-lake trail Sat and Sun, 24th Ave bridge until late this year