As a birthday present to yours truly, WSDOT will fix 520 Bridge Trail bumps 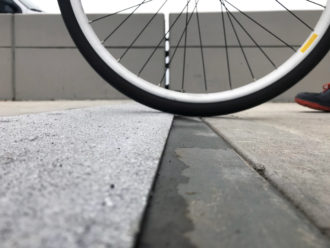 Photo of the less bumpy plate design from WSDOT.

In what is obviously a birthday present to yours truly, WSDOT announced today that they will fix every bumpy expansion gap plate on the 520 Bridge Trail.

We first reported about the bumpy plates back in 2016 before the trail was completed, then again in 2017. The problem was that the plates covering the floating bridge’s expansion gaps were built with an abrupt incline along the edges, making them feel more like hitting potholes than the more gradual bumps a user might be expecting from a brand new trail.

Luckily, I have not heard of any crashes caused by these plates, as I had feared. But the plates are unpleasant enough that it is worthwhile improving the trail experience on this $4.5 billion public investment.

The agency has been testing a more gradual expansion plate design, and 95 percent of users surveyed said the new design is an improvement.

The new plates should all be installed by the end of summer.

We asked, you answered and now change is coming to Seattle’s SR 520 Trail across Lake Washington!

You may recall that after some concerns were raised about the steel cover plates on the trail’s expansion joints, we installed a prototype plate designed to ease the bumps that some bicycle riders were reporting. We asked if the new plate, designed by our engineers, was an improvement over the previous plates. And, overwhelmingly, the answer was YES!

More than 260 trail users responded to our survey and provided feedback, and 95 percent said the new plates were an improvement.

Late summer installation
We’re working with our contractor to replace all of the narrow cover plates on the floating bridge portion of the 520 Trail by late summer. This will require several intermittent trail closures and as we get closer to the replacement work we’ll get information out about any disruptions, including on our 520 webpage. We’ll do what we can to avoid high-traffic times in the morning and evening.

Many thanks to everyone for taking the time to test out the new plate and provide their feedback. We’re excited to have found a solution that works for everyone and we’re confident the new cover plate will provide an even smoother trip for those enjoying a bike ride across the SR 520 bridge.

Founder and Editor of Seattle Bike Blog.
View all posts by Tom Fucoloro →
This entry was posted in news and tagged 520 trail, wsdot. Bookmark the permalink.

9 Responses to As a birthday present to yours truly, WSDOT will fix 520 Bridge Trail bumps