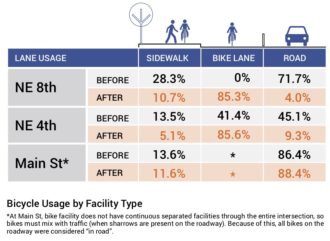 The City of Bellevue may have just conducted the most thorough study of a bike lane pilot project ever. The 31-page report (PDF) about the 108th Ave NE bike lane in the Eastside city’s downtown core found that bicycling increased 32%, sidewalk biking rate was reduced by more than 60% and zero collisions involving people biking have been reported.

And these results come from a bike lane design that is not even fully protected. Some sections only have paint, and one pinch point section even requires mixing with general traffic. So these results still have room to improve.

The Bellevue City Council voted last week to keep the pilot bike lane. But the city is also learning from what they observed and from survey results to make it better. And the city is also looking at how to best create an east-west protected bike lane connection, likely on Main Street. Cascade Bicycle Club has a handy online form so you can let Bellevue know you support their bike lane work and would like to see it grow to Main.

The extensive studying also turned up some possibly surprising results. For example, their survey found that people feel most comfortable when bike lanes are separated and protected whether they are biking or driving: 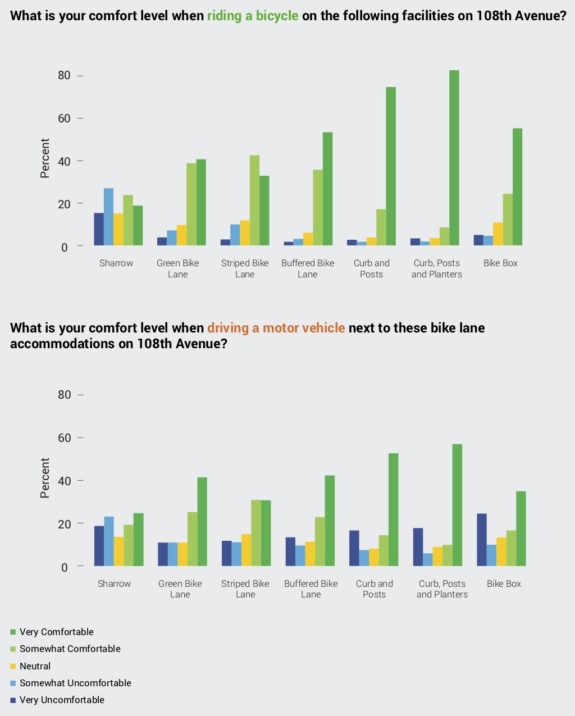 The study also included a Level of Traffic Stress analysis, which is based on comparing measured vehicle speeds and volumes to the level of bike protection provided. Segments are rated from 1 to 4, with one being “all ages and abilities” and 4 being “fearless adults.” So, for example, a slow residential street with very low traffic volumes might get LTS 1 even without bike lanes. But a busy street (like a downtown street) would need a significant level of protection to get the same rating.

Using this analysis, Bellevue’s transportation staff determined that only a few segments of the pilot bike lane get the top rating, and no intersection rises above LTS 3. So they are being very transparent about where they have room for improvement, which is great: 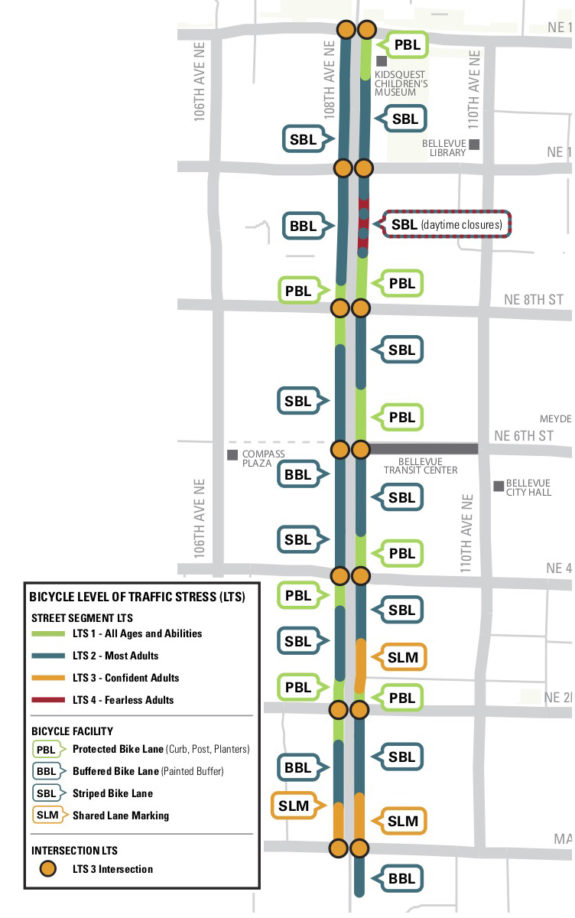 I wonder how Seattle’s 35th Ave NE street designs would have compared under this analysis system, for example. Perhaps SDOT should consider this as a tool for explaining bike elements of their projects.

Maybe this analysis of the 108th Ave NE pilot project is way overkill. But then again, now we have answers and hard data for essentially every question someone could ask. Did it increase travel times for people driving? No. Did it slow buses? No (it actually improved bus times). Did it increase collisions? No. Did the extra protection really help the bike lane work better? Yes. Did the lane attract bike share trips? Yes. Did it decrease sidewalk biking? Yes.

Hopefully the city can also extrapolate the results of this study to inform their other needed bike lanes, since they can’t (or shouldn’t) spend this much time, energy and funding on every single bike lane. Bellevue has a lot of work to do before they have a connected network of bike routes that hit LTS 1 or 2, but this is a great study to stand on when designing and building them.