Some Bike Blog business: Planning an endorsement board + A family life update 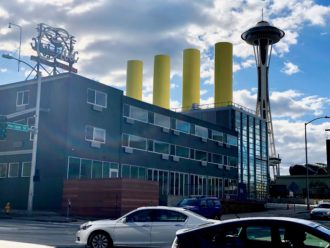 Seattle’s more honest promotional photo: Our 1962 symbol of the city of the future next to our 2019 car tunnel smoke stacks.

Hello, wonderful Seattle Bike Blog readers. I’ve got some cool bits of blog and family news to share, so I figured I would write you all a letter keeping you in the loop.

First, my incredible spouse Kelli started work this week as Legislative Assistant to Councilmember Mike O’Brien. I’m letting you all know because A: I think that’s really cool news, and B: I figured I should explain how we plan to avoid conflicts of interest for the sake of transparency.

O’Brien is the Chair of the Transportation Committee, which I report about often. So Kelli and I have come up with some simple rules to both protect our relationship and avoid any conflicts of interest:

With 50 candidates running for City Council, some of whom I consider personal friends, there’s no way I can do blog endorsements myself this year. So I am in the planning stages of putting together an endorsements board to help with the workload and provide a wider perspective on candidates. A board will also allow our endorsements to be fair to all candidates in races where I have existing friendships.

There will likely be an open call-out for board members, so stay tuned for details (if anyone has relevant experience putting together something like this, I’d love advice). I’m hoping to make it both work and fun.

Seattle Bike Blog is proudly independent, supported by direct-sale relationships with local businesses (no third party ad services like Google) and paid monthly reader supporters. News has been slower than usual here since my daughter was born because I double as a stay-at-home dad these days (is “work-at-home dad” a thing?). But as she grows and learns to be more independent (she’s so close to walking!), I’m getting back more and more time to dedicate to this site. So expect things here to continue ramping up slowly. The biggest change, I hope, is that I will eventually be able to do more on-the-ground reporting and long personal interviews than I have lately.

I have also been thinking a lot about platform ownership. When I started this site in 2010, there was this trend where reporters were spending lot of time and energy reporting directly via Twitter and Facebook, since those platforms were a very effective way to reach more users more quickly. But eight years later, we’re seeing the downsides to giving your work to social media companies: They keep all the money. Well, Facebook does, anyway. Twitter is pretty awful at making money. Facebook doesn’t report the news, they just profit from reporters’ work. Even worse, Facebook won’t even serve your posts to most of your own followers unless you pay them money (which I have never done outside of a few event promotions). This is not a new development or observation, but as more and more news outlets close or make cuts (or get bought by assholes like Sinclair who break editorial standards by forcing conservative propaganda disguised as local news), I’m realizing how important it is that independent journalists own their platforms and revenue streams.

I own SeattleBikeBlog.com, and I own the advertising sales system. Of course, that means I am also my own tech support, which is why the calendar is so often broken or why the “forgot password” button didn’t work for months (it’s fixed now I think!). It’s also why the design of the desktop site hasn’t changed in eight years. My logo is still a sharrow! But at least this site belongs to the journalist behind it.

Badass journalists at Gawker unionized, and now Buzzfeed journalists are working to do the same thing. You might even say there’s a journalist union movement happening, and it’s about damn time. But I also think it’s time for the independents and the freelancers (OMG freelancers are treated like such shit) work together to take more ownership and/or control of their own work. I don’t know exactly what the looks like, but the status quo is clearly not working. Whenever a legit journalism job is lost, corporate and government PR gains power, misinformation on Facebook has more space to grow, and propaganda from Sinclair or whoever becomes that much more powerful.

To tie this into the section above, Seattle has fewer journalists and more City Council candidates than any other time in recent memory. I’m honestly worried that our city is not in a place to report adequately about this election, and that opens the door for social media misinformation to have a bigger influence.

The Seattle Times and The Seattle Foundation recently launched the Seattle Times Investigative Journalism Fund, which can take tax-deductible donations to help keep the paper’s remarkable investigative work going. This is a very interesting concept, and I hope it works. Because there are very few organizations that can do that kind of work these days, and it’s so important.

But what’s it going to take to keep the rest of the journalists funded in this town?

7 Responses to Some Bike Blog business: Planning an endorsement board + A family life update