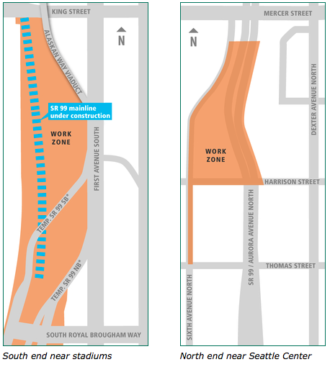 Waterfront bike routes, including the path under the Viaduct along Alaskan Way downtown, will remain open during the upcoming SR 99 closure, SDOT confirmed today.

We have received a lot of questions in the past week from folks wondering is the Viaduct closure would also close their bike route, and it was difficult to find info about bike route closures in the information released. So it’s great to hear that the current routes — including the Portside Trail (connecting E Marginal to Alaskan Way between Atlantic St and King St) and the pathway under the Viaduct — won’t be disrupted, at least not anymore than they are normally.

Unfortunately, WSDOT and SDOT will not be providing any temporary bike route improvements to help people travel through gaps in the bike lane network, however. Such improvements were not expected, but it’s still disappointing that the city is not lifting a finger to help more people get around by bike during this closure. And SDOT’s Heather Marx gave Mike Lindblom at the Seattle Times an even more disappointing reason for the lack of temporary bike lanes:

January is not a comfortable month for biking or walking,” said Heather Marx, city downtown mobility director. “It hasn’t been a big part of our message, because it’s just a hard sell that time of the year.

While certainly fewer people bike during the winter than in the summer, there are still a ton of year-round bike riders in Seattle. The Fremont Bridge recorded 58,591 trips in January 2018, and that’s just one bridge. Sure, that’s a little less than half the trips in July, but it’s still a lot of people who are probably saying to themselves, “What? Am I invisible?” And a highway closure event like this could have been a great opportunity to help more people become year-round bike riders.

Bike advocate Merlin Rainwater wrote a letter to the editor in response to Marx’s statement pointing to recent bike network improvements like the Belltown extension of the 2nd Ave bike lane as an opportunity to help more people bike:

Shouldn’t the city be encouraging people to take advantage of those improvements and try biking? I’m a 72-year-old woman, and I bike year-round. It’s not that hard to sell.

At least bike share is stepping up to try to help more people make more trips by bike during the highway closure. JUMP is waiving the $1 unlocking fee through February 15 (you still pay 10¢ per minute) and bringing thousands more of their red bikes in coming weeks. Between the two companies, there could be 8,000 bikes in service during the closure, Lindblom reported.

The city also says it is working to limit closures from construction work “by temporarily revoking and reissuing permits for work in the right of way until after the closure, and increasing the number of inspectors monitoring projects on the street.” This will hopefully help cut down on the constant bike lane and sidewalk closures downtown.

Perhaps the best improvement for biking is that the Coast Guard will allow the city to restrict Ship Canal bridge openings for more hours around commute times. And since all the bike routes across the canal use draw bridges, this could prevent some bridge delays for folks. That’s not exactly a game changer, but I guess it’s at least something.

But even if the city isn’t going to take action to help more people bike, that doesn’t mean you all can’t. This is a great time to offer to help coworkers or friends get biking. West Seattle Bike Connections was ahead of the game by hosting a test ride last weekend for folks in West Seattle interested in learning how to bike downtown. Neighbors from more parts of town should follow their lead and organize efforts to help folks navigate the city by bike. And be sure to let Seattle Bike Blog know about your efforts by commenting below or emailing [email protected].

This entry was posted in news and tagged heather marx, reallign99, sr 99. Bookmark the permalink.